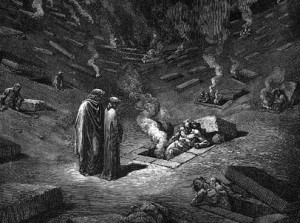 Irving, Texas. G. K. Chesterton begins his Utopia of Usurers with a description of a world in which all art has become commercial art. He does not find it out of place that the wealthy support the arts, but in the older patronage, “The prince paid for the statuette; but he did not expect the statuette to pay him.”

We might think it strange to begin a discussion of usury with a discussion of art, but Dante as well views usury as a violation of art and nature. While journeying through the Sixth Circle of Hell, where usurers are punished, he asks how usury offends, and Virgil answers:

From these two, art and nature, it is fitting,

If you recall how Genesis begins,

for men to make their way to gain their living;

and since the usurer prefers another

pathway, he scorns both nature in herself

We have long since journeyed into the paradise of the plutocrats where art, like everything else, must pay its way, which means it must pay the merchant-prince, who has come to own all ways. We no longer think it unusual that art is subverted to commercial and political propaganda, while much “serious” art defends itself by becoming unintelligible. And usury has long since ceased to be a topic of economic analysis; in the world of plastic, we think nothing of financing our burgers and fries at 25% per annum.

Indeed, the last great economist to address the subject of usury was J. M. Keynes, back in the 1930’s. Keynes, who was no friend of the Church, surprised himself by finding that the Church’s restrictions on usury made perfect economic sense, a sense ignored by classical economists:

Provisions against usury are amongst the most ancient economic practices of which we have record. The destruction of the inducement to invest by an excessive liquidity preference was the outstanding evil, the prime impediment to the growth of wealth, in the ancient and medieval worlds…. I was brought up to believe that the attitude of the Medieval Church to the rate of interest was inherently absurd, and that the subtle discussions aimed at distinguishing the return on money-loans from the return to active investment were merely Jesuitical attempts to find a practical escape from a foolish theory. But I now read these discussions as an honest intellectual effort to keep separate what the classical theory has inextricably confused together, namely, the rate of interest and the marginal efficiency of capital. (The General Theory, 351-2)

What Keynes is saying in this somewhat technical language is that when returns to pure loans are higher than returns to actual investments, you will have a problem; if you can make more money lending to consumers at 25% than to auto makers at 10%, then the money for making things will dry up, and loans will shift to consumption and speculation. After Keynes, the conversation mostly stops, is mostly confined to Distributists and other “unorthodox” types.

Hence the article Thomas Geoghegen in the pages of Harper’s Magazine, “Infinite Debt: How Unlimited Interest Rates Destroyed the Economy” is a welcome revival of the topic. Unfortunately, the article is not yet available on-line, but it is worth picking up a copy of the magazine to read it.

There is an interesting parallel between the lifting of the usury laws and the abolishing of the abortion laws: both were accomplished not by democratic process, but by judicial fiat. In Marquette National Bank v. First of Omaha Service Corp. (1978), the Supreme Court found that an 1864 law prohibited the states from enforcing usury laws in their own state if it was legal in another state. For all practical purposes, this ended usury laws.

According to Geoghagen, the lifting of the usury laws had dire unintended consequences, one of which was the decline of manufacturing:

It may be hard to grasp how the dismantling of usury laws might lead to the loss of our industrial base. But it’s true: it led to the loss of our best middle-class jobs. Here’s a little primer on how it happened. First, thanks to the uncapping of interest rates, we shifted capital into the financial sector, with its relatively high returns. Second, as we shifted capital out of globally competitive manufacturing, we ran bigger trade deficits. Third, as we ran bigger trade deficits, we required bigger inflows of foreign capital. We had “cheap money” flooding in from China, Saudi Arabia, and even the Fourth World. May God forgive us—we even had capital coming in from Honduras. Fourth, the banks got even more money, and they didn’t even consider putting it back into manufacturing. They stuffed it into derivatives and other forms of gambling, because that’s the kind of thing that got the “normal” big return; i.e., not 5 percent but 35 percent or even more.

But in addition to the economic effect, it had a profound effect on the moral character of the nation:

The change in credit-card caps also had a bad effect on the moral character of the nation. Because interest rates were so high, the banks no longer wanted borrowers with good moral character. Look at the way lending has changed just since the time I was in law school in the early 1970s. Even then, the mantra of my teachers in contracts and commercial paper was: “The loan must be repaid!” I have a friend, a professor, who still quotes that refrain. But it’s out of date. At interest rates of 25 percent, or 50 percent, or 500 percent, lenders don’t really want the loan to be repaid—they want us to be irresponsible, or at least to have a certain amount of bad character.

One question, however, is why we were willing to oblige the bankers by displaying such poor moral character. No doubt the convenience of the credit card was a factor, but there is more to it than that. One reason is that we had to. The shift in the economy from manufacturing to finance meant that workers were no longer able to bargain for wages through unions and other means. Since 1972, the median hourly wage has stagnated. We experienced a very odd phenomenon: productivity exploded, but wages remained the same. Obviously, there was not enough purchasing power to clear the markets. Workers responded in two ways. One was to work more hours and put more family members to work, with a devastating effect on family life. The other was to borrow more. Our sense of well-being in the Sixth Circle was largely built on plastic.

Further, the best and brightest of our students no longer went into engineering or manufacturing, but into finance. We started to lose even the knowledge of how to make things. As Thomas Geoghegen points out, not only did financial companies account for 40% of corporate profits in 2003 (up from 18% in 1988), but this may understate the problem. Many “manufacturing” firms, like GM and GE, actually made their profits from their finance divisions. GM became a company that manufactured cars in order to make loans on them.

Our current bail-out plans are mainly directed at the banks, the hedge funds, the insurance companies, and other financial institutions. But this will not work. Wealth comes from the farm, the field, the fishery, the factory, the forest, and the mine. Everything else depends on these. Without restoring manufacturing, farming, mining, and other basic industries, we cannot rescue the economy. But we have the order exactly reversed. The bankers get an instant bailout, no questions asked, while manufacturers, like the auto makers, have to crawl over broken glass to get what amounts to “chump change” in the context of the overall “rescue” numbers. Moreover, “contracts” with the derivative traders of AIG are regarded as sacred and unbreakable, while union contracts are broken at will.

It is the habit of the modernists to despise the past, and so it is no surprise that a restriction which existed in most cultures from the time of the Babylonians to the time of Jimmy Carter would be overturned. Yet, even modernism posits some empiricism, actually looking at the effects of an action. It has now been long enough to look at the effects of the Supreme Court’s 1978 decision. And without revisiting this decision, we cannot fix the economy.

Dante puts the usurers in the deepest ring of the Sixth Circle of Hell, the place where fraud is punished:

Of every malice that earns hate in Heaven,

injustice is the end; and each such end

by force or fraud brings harm to other men. (Inferno Canto XI, 22-3)

The difference between hell and earth is that on earth the innocent are punished along with—or in place of—the guilty. But we have refined the art by taxing the innocent to pay huge sums to the guilty. Welcome to life in Circle Six.