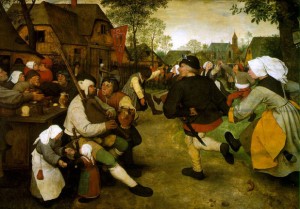 Irving, TX. In answer to the question, “What do the poor want?” Simone Weil replied “They want you to look at them.” I take Simone’s answer to mean we must look at this poor person or that poor village, and see them in their actual situation. There are any number of people, of various political persuasions, willing to look at “the poor” and at “poverty.” They rarely look at actual poor people, which is just as well since they would not like what they see; what they would see are people with a very different set of values, values that are incompatible with the modern world. This is especially true of the poor peasant. Capitalist and communist alike are willing to do all in their power to ensure that the peasant shall not be poor, but only on the condition that he shall not be a peasant. They both promise to give him valuable things if only he will surrender his values.

This is certainly true of the Quechua-speaking people of the Peruvian highlands, descendants of the Inca empire but for centuries poor peasants living on the margins of the dominant Spanish culture. Having little to steal, Lima had little interest in them. And so they continued in their peasant ways on marginal lands in the mountains.

There were some willing to help. The Marxists, for example. They were more than willing to “improve” the lot of the peasant if only the peasant would become the new Marxist Man. This man had his roots not in the village, but in the National University of San Cristobal with a Maoist philosophy professor , Abimael Guzman, who founded the Sendero Luminoso, “The Shining Path.” The Senderistas unleashed a bloody civil war in Peru that ran from 1980 thru 1992, and brought Peru to the brink of collapse. Although there was some initial sympathy for the rebels, their antipathy to peasant values and their murderous violence against any who resisted, or were even suspected of resistance lost them any support. The villages were caught in between the rebels and the army, with each side abusing and murdering those whom they merely suspected of sympathy with the other side.

The capitalists of Peru were also willing to help, so long as the peasants know their place, that place generally being cheap labor and a marginal existence in the cities. More sophisticated capitalists, like the Peruvian economist Hernando de Soto proposed bringing the poor into the modern world by modernizing their property rights. In his popular book, The Mystery of Capital; Why Capitalism Works in the West and Fails Everywhere Else, DeSoto noted the vast amount of capital that the “poor” have in land, tools, and cash, an amount that exceeds the value of the Lima Stock Exchange. However, these values cannot be used as “capital” because the tenures are not formally recognized in law. DeSoto’s solution is to speed up the process of land registration and convert all the titles into Lockean property which can then be used as capital.

The problem is that DeSoto does not recognize the complexity of village titles, which are a combination of communal and family plots. Even the family plots, however, are held through communal acknowledgment of the individual rights. The land is not so much held by the family as for the family. These complex community arrangements pose some problem for a purely individualistic notion of property. Adam Webb notes that the conversion of communal land into individualistic property

Opens up a fault line between those who want to get along and those who want to get ahead. Modern society is arranged to benefit the shrewd and competitive, those who can figure out how to manipulate the new rules of a larger society to their own advantage.
The result is likely to be what they have always been: a few large landowners and a mass of men without property, not to mention the complete destruction of community values.

Adam Webb has looked at the question of values. His first book, Beyond the Global Culture Wars was a masterful look at the clash of values that underlies our current conflicts with other cultures. In his new book, A Path of Our Own; An Andean Village and Tomorrow’s Economy of Values, Webb, a Harvard-trained sociologist, takes the trouble to actually look at an actual village (Pomatambo in the Peruvian highlands) and actually bothered to get to know the people and find out what they want.

We cannot make the mistake of romanticizing the poverty of the villages. Their attachment to values does not preclude a desire for indoor plumbing and electricity. This requires development. But a development that destroys the values of the community is not likely to be real development at all. Indeed, economics cannot be divorced from values, nor efficiency from ethics. Those who sacrifice ethics for “efficiency” will discover that they have created an economy with neither, an economy destined to collapse, and that right soon. Indeed, that is what we are witnessing today. We are required by political correctness to simultaneously proclaim the efficiency of the market and avert our eyes from the massive bailouts and subsidies. But these are nothing new; they are part and parcel of the history of capitalism, as witnessed by the fact that in 1776, Adam Smith devoted 3/4ths of The Wealth of Nations to detailing the incestuous relationship between business and government. The situation has not noticeably improved since Smith’s day. The bailout is a rather regular and recurring feature of capitalism, yet each time we are supposed to be shocked, shocked, and reaffirm our belief in the unaided market alone.

In formulating his solutions, Adam Webb draws on Western agrarians and distributists like Wendall Barry, Chesterton, Belloc, Schumacher, and the Mondragón experience, as well as Eastern distributists like Liang Shuming and Mohandas Ghandi. But Webb does fault these thinkers as being too devoted to place and particularity to the detriment of the universally held values that each of these particular places expresses. As he puts it:

The ethos of traditional peasant life is one of no-nonsense self-reliance, austere morality, self-command amid adversity, duty towards kin and neighbors, generosity, hospitality, participation, and the anchoring of one’s livelihood in an atmosphere of decency and fairness. These virtues have been universally valued among peasant folk all over the world. The peasant community and its customs reflected such virtues and created the conditions for people to exercise them.

It is this universality of values that Webb sees as the basis for forming a counterweight to the individualistic (and highly subsidized) globalization that tends to destroy these values. His proposals for capitalizing the resources of the village, both at the communal and individual level, provides for both community and individual enterprises to flourish in an atmosphere that preserves rather than destroys value. Every system of values must have its economic and political expression in order to survive as a living entity, rather than as a mere cultural curiosity. The importance of this task cannot be underestimated.

Half of the world’s population are still peasants. We normally conceive of the task of development as one of rescuing that half of the world from its poverty. But we should stand this viewpoint on its head: the real task is one of rescuing that half of the population who are still capitalists—or trying to be—from their unworkable and unsustainable materialism. It is not the capitalist who will rescue the peasant, but the peasant who stands ready to rescue the world from its no-longer viable capitalism.

Adam Webb has fulfilled Simone Weil’s requirement that one actually look at the poor. He has done extensive work in their villages, and actually listened to what they actually wanted. The result is a remarkable book and a remarkable plan, one that recognizes both the values of communities and the modern potential of building on those values. An economy without values has no future (a point which I feel confident that Benedict XVI will make next week in his new encyclical), and no bailout of whatever size can rescue it. Rather, it will have to be rescued by those who still hold the values upon which a viable economy can be built.