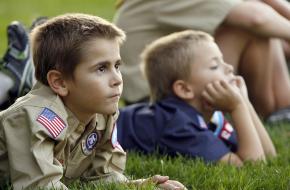 Philadelphia, PA. The recent decision by a federal jury in Philadelphia on behalf of the Boy Scouts of America (BSA) is good news for people who love American liberty and for the philanthropies that sustain such voluntary associations. The specifics of the case were fairly simple. BSA rented a building from the city for $1 per year while also paying the costs for maintaining the facility. But owing to the organization’s prohibitions against gays, the city went to court to end the lease and evict BSA. Philadelphia attorneys argued that the Boy Scouts had violated the terms of the lease because their anti-gay policy was a form of discrimination at odds with federal law. BSA agreed that the city had the right to terminate the contract if they were indeed guilty of an unconstitutional policy. The question before the jury was whether BSA had in fact violated federal guidelines by barring gays.

On the surface, many Americans – as well as residents of Philadelphia – believe that BSA is at odds with the nation’s ideal of equality and freedom. One editor of a local newspaper opined that “Exclusions based on sexual preference – from membership in an organization to basic civil rights like marriage – should be eradicated.” BSA may, the editor conceded, do a lot of good, but constitutional protections for discrimantory policies “authorizes a form of bigotry that we would find intolerable in almost every other application.” BSA perpetuated “second-class citizenship for gay Americans.” “It’s a situation that is . . . unethical” “unconscionable” and “completely un-American.”

For some reason, no one seems to mind that BSA excludes girls.

But the principle of voluntarily excluding from an association those who are at odds with the organization’s expressed purpose is as American as apple pie. The reason is that political liberty is not simply for individuals but also for groups of persons who want to form associations for an expressed aim where rules for membership are different from those governing belonging to the civil polity. If all groups were forced to comply with the anti-discrimination policies of the federal government, conceivably churches could not exclude unbelievers, wine clubs would have to be open to tee-totalers, and neighborhood associations would be forced to include non-residents.

The latter two examples might seem silly but they do make a substantial point missed by many critics of the Boy Scouts. Chances are, those who abstain from drinking alcohol will not want to join a wine club and residents of the Upper West Side of Manhattan (NYC) will not want to join the community association of Glenside, Pennsylvania. And that’s the point. Organizations like BSA are voluntary associations; people join them voluntarily as opposed to being born into them. More to the point, residents of the Upper West Side do not regard themselves as second-class citizens for not being able to join Glenside’s civic association. More likely, the residents of Manhattan do not consider themselves inferior to anyone. The same goes for many Americans who are inclined to support gay rights. The second-class citizens in the BSA versus Philadelphia case are not homosexuals but the poor, benighted, and bigoted Boy Scouts.

Also worthy of mention is the logic that ties the alleged civil right of marriage to membership in BSA. This is another instance of the confusion that attends the quest to extend civil liberties without distinguishing between public and private forms of association. The last I checked, the Boy Scouts are not responsible for state or federal policy on marriage. Again, this is a simple reality for any voluntary association. Its scope and authority is not public but private. BSA does not perform gay marriages because it does not marry anyone.

Another interesting dimension of this case is that a jury decided the case. For that reason, no judge’s decision exists for legal reporters to scour for the prevailing constitutional theory. Instead, the decision simply reflected the votes of the jury (a unanimous group of six women and two men). If a federal judge had decided the case, one’s imagination would not have to work overtime to think that the decision would have been different. In which case, the average American may have a better grasp of the nature of American liberty than any judge, legislator, or newspaper editor who believes that political liberty means all Americans and the groups they form need to embody national standards of equality and fairness.

This piece originally appeared on July 16, 2010 at Philanthropy Daily.

Multiply Your Associations and be Free