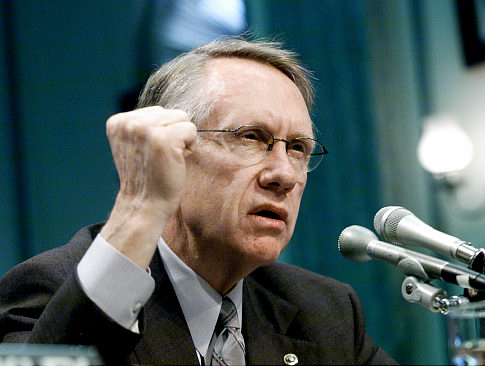 Wichita, KS
Some excellent reporting, and thinking, on display in Nicholas Lemann’s long profile of the Reid-Angle showdown in the latest New Yorker. Lemann has some sharp and funny things to say about Sharron Angle, but mostly his piece is a close and, it must be said, often uncomplimentary study of Senate Majority Leader Harry Reid. Lemann’s admiration for Reid’s politics is undeniable, but Lemann himself also can’t deny just how thoroughly Reid embodies a particularly simple and unsophisticated–even, shall we say, rather vulgar–old-school redistributive liberal politics. He lays out story after story of Reid’s famously, even notoriously, hard-scrabble upbringing and personality–raised by a couple of borderline-abusive drunks in an isolated Nevada mining town, hunting for rabbits to meat on the table, starting fistfights with other kids, his father, and his future father-in-law–as well as the roots of his often resentful toughness and thoroughness–the law school dean who told him to give up and drop out, his rough confrontations with gaming officials at the start of his political career–and the conclusion is inescapable: to a degree, Reid exemplifies the outlook of a certain set of poor, rural, pseudo-populist, contemptuous-of-easy-wealth, lacking-in-sensitivity (and how!), unapologetic boot-strap climbers that helped give us FDR and the New Deal (as well as, in Louisiana, Huey “Every Man a King” Long). Lemann sums up:

[Reid] took personal umbrage at George W. Bush. “I have made no secret of my antipathy toward the second President Bush…an ideologue who has done incalculable damage to the government, reputation, and moral standing of the United States of America”….Late in his Presidency, Bush summoned Reid to the White House and tried to appease him. “I never went to Kennebunkport as a kid,” Reid recalls. “I never went anywhere. And I’ve got no blue blood in my veins, just some desert sand. So as he and I sat there in the Oval Office, I said little in return.”

Other than a few close relationships, like the ones with his wife, Landra, and with Mike O’Callaghan, what most reliably draws warmth from Reid’s tempered-steel heart is New Deal liberalism. He likes to say that his parents’ religion was Franklin D. Roosevelt; practically the only good thing that ever happened in the life of his father was joining a union. “The American government is the greatest force for good in the history of mankind”; Social Security is “the greatest social program since the fishes and loaves.” Sig Rogich, a Nevada adman who worked in George H. W. Bush’s White House, and who, like most establishment Republicans in Nevada, is backing Reid over Sharron Angle, told me that during many evenings at his house he and Reid have relaxed to old Woody Guthrie songs on the CD player—“poignant songs about society and the poor.”

I have no idea if I’d like Reid in person, and I kind doubt he’d like me; I’d be too soft for him, and it doesn’t seem like he has room in his life for a great many friends anyway. But I basically support him. Part of the reason for that is simply tribal, but not all of it. There’s also the thankless (and sometimes nigh-incomprehensibly contorted) process of getting health care reform through our dysfunctional Senate. Actually, I suppose, the two are tied together–I happen to believe that efforts of make at least some minimal health care coverage more broadly available (which, whatever my many complaints with it, the Affordable Care Act does accomplish) is a religious duty, a duty which Reid faithfully performed. But there is also a great misfortune in all of this, one which Reid also exemplifies quite well. The health care reform debate, to my mind, offered the opportunity of a serious engagement with the particulars of our state and corporate capitalist system–an opportunity for us to really ask ourselves what should be handled socially and what should be handled privately, and what forms of public and private associations could handle such things, and what level of public handling (local or state or national) would best. And of course, we didn’t get anything like that, or hardly did. The Obama administration never truly pushed for a public option, or really any kind of single-payer plan; private insurers and other corporate interests were compromised with from the start; the democratization or diversification of health care coverage was never as important as streamlining the bottom-line–and, of course, such overriding cost-controls are always best done in a top-down way, or so our managerial culture assures us. And so health care, like financial reform, like so much else, becomes boiled down in our national political debates to a crummy either-or choice: either centralized regulation and provision to supplement and restrict (but never truly challenge) the market, or the cutting-back on or outright abandonment of regulation and provision entirely (leaving the market free to spread its opportunities around, at least insofar as the powerful corporate players in the market allow it to, which they usually don’t).

Reid, I strongly suspect, sees nothing wrong with this choice whatsoever; he’s on the liberal side, and that’s good enough for him. And to be sure, when times are good and the market is booming, that’s good enough for plenty of his fellow citizens as well. But times aren’t always good–and it is especially when they aren’t that one really poignantly wishes that someone had some other way of approaching social problems in their repertoire. Lemann doesn’t share this wishing, I believe…but I think it comes out, all the same, in his conclusion:

Recessions weren’t supposed to happen in Las Vegas; even the September 11th attacks created just a brief downward blip. Over twenty years, Las Vegas became the conspicuous-consumption capital of the world. Then, beginning in 2007, and escalating in 2008 and 2009, Nevada went spectacularly bust. Last year, the state lost population for the first time since the Great Depression….Reid reacted to the bust just as you would expect. He helped extend unemployment benefits, gave special aid to schools so they wouldn’t have to lay off teachers, secured money for potentially job-rich alternative-energy projects in the desert, and funded foreclosure-prevention counselling. One of the less nationally heralded pieces of Obama Administration legislation was the Travel Promotion Act of 2009, which creates a publicly funded vehicle to advertise abroad for tourism to American destinations, such as Las Vegas. Reid made that happen….

People go to Nevada to loosen the bonds of traditional society and try something new. What has happened there over the past twenty years is a particularly American version of the economic cycle. European governments get into trouble by overloading on pensions and other expensive benefits; American governments get into trouble by practicing a kind of casino liberalism, in which credit flows too easily, everybody goes too deeply into debt, and if the growth ever stops, everything crashes. Now Nevadans are being presented with a great clash of social visions: help from Washington with Reid versus less of Washington with Angle. The stakes are real, not rhetorical. Reid’s reëlection campaign is about the role of government in the United States. Obama’s reëlection campaign will be about that, too.

If I could really believe that the last two years had led people to maybe, just maybe, actually rethink what it means to create the conditions for “casino liberalism,” and perhaps come up with alternatives to it, then this election would excite me. But it doesn’t. The options for rethinking our state and corporate-dominated liberal capitalist economy–whether distributist-localist or socialist-anarchist–are out there…but from what I can tell, the Tea Parties aren’t talking about them, and the Democrats sure aren’t either. Instead, it’s “protect Social Security and Medicare!” on one side, and “Repeal Obamacare (but leave Social Security and Medicare alone)!” on the other, as if those were really the most meaningful constitutional issues which the past two years have provided for us. But such appears to be our fate.

Lemann sees the the Reid-Angle contest as a thoroughly national one; a referendum on the Obama administration. George Will says the same thing about the West Virginia senate race; E.J. Dionne says the same about House races in Ohio. It’s the same all over. No doubt some people are terribly excited about what will happen in voting booths all across the country in twelve days, but I don’t think there’s much basis for that excitement. Patrick Deneen said it well:

Anti-Washington fever will rise to dizzying heights in coming days. The chattering classes will conclude that Americans have a firm idea of their destiny, choosing one party over another in coming days. Few will understand that the source of our loathing will be the division within ourselves. The divided government we will embrace is the division in our souls: two versions of democracy. In the one version, democracy is rugged individualism. In the other, democracy is a gentler concern that no one should be left behind. Both are fantasies born of bad modern anthropology.

I want to pursue ends towards which a different anthropology might direct us. But with parties led by people–good people, no doubt, who come to their positions honestly, whatever we may think of the history or personality by which those decisions were made–we have the option of retreating, or fighting. Retreating has some real appeal to it, even if such a lack of civic concern probably isn’t very healthy in the long run. But for those of us, for whatever reason, unwilling to retreat, there are the choices before us, and all the usual political calculations. If I were in Nevada, my calculations would lead me to Reid. Maybe. Unfortunately.

What’s Wrong with the Republican Party?