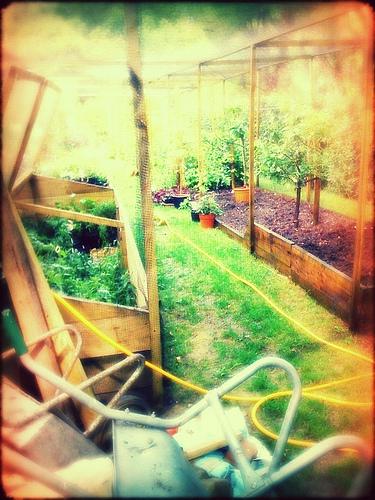 In the raspberry patch, Henry County, Kentucky. If there is anything that makes me unhappy about a discipline otherwise dear to my heart, it’s finding it promoted by a corporation chasing sales. Hence my dismay when I tripped over a snack cracker’s website trumpeting farming–or rather, “home farming.”

We’re at full summer now and the website is in full throttle: people can post their own “farm” photos on the site, ask questions, plan their garden onscreen, and of course boast of their progress. (Few of us can overmaster the desire to brag to our neighbors about our latest harvest. You should see my onions, by the way.)

The site makes bragging particularly easy. You can click on “Today I planted,” “Today I watered,” or “Today I harvested.” As the editors over at Urban Farm magazine like to put it, “It doesn’t take a farm to have the heart of a farmer.”

The cracker’s marketing department has created a big collage of minaturized home-farmer photos from all of those volunteered pictures, and when I dove in with my toolbar magnifying glass I found formal portraits, Christmas card family shots, a boy scout hike and, mysteriously, a koala. There were also a few pictures of people actually planting seeds. What I couldn’t find was anybody who was dirty.

“Home farming” is a PR innovation, but “urban farming” is now a term for a movement.  Google it and you’ll find all sorts of links, ranging from MacArthur genius award-winner Will Allen to a heartfelt micromovement in my own state which I will call (avoiding the real name out of consideration for the well-intentioned) “Urban Farmers: A Fourth of an Acre and No Mule.” This group also has a website with photos and chat. As I walk around Louisville’s East End, where this group’s founders live, I see chickens occasionally, and neatly staked front yard tomatoes, and teepees of beans in the back—efforts I would see in many other cities and efforts I am glad to see. Gardening, at whatever level you practice it, is a fine thing to do, and as I find it extremely satisfying myself I wish the same gratification to everyone.

Does it matter, then, what we call it? If so, what is the right term for four tubs of patio tomatoes, or a ten-by-ten-foot backyard squash patch, or a front yard mixture of herbs and flowers? A pod of pots? A victory garden? A money pit, for those perfectionists going after the $64 tomato? All of those sound fine. Just don’t tell me you are farming.

Language changes, and language degrades, but nouns and verbs deserve to be defended against erosion as much as any piece of shoreline.  The word “farming” means something, and its meaning is not “gardening,” and it’s not “puttering,” and it’s not “edible landscaping.” As small farm advocate Mary Berry Smith likes to emphasize, farming must mean (among many other obvious things, like real work) putting equity at risk.

Years ago my friend “Dan,” who has farmed all his life, including running a dairy as a teenager and raising tobacco, took on a second job of selling real estate in order to bring in some extra income. Everybody knows what you’re doing in a small town, and it wasn’t long before some neighbor at the coffee shop twitted him about being a realtor and not a farmer anymore.

It was an unfair remark, but it showed how country people feel about anyone they can accuse of lack of seriousness. To call yourself a farmer without having earned the title is, in this small community at least (and I suspect in many others), not done. My husband and I have made plenty of social mistakes in Henry County, but we have never insulted our neighbors by calling ourselves farmers. We have run cattle, and we have lived on a farm, and my husband has done plenty of tobacco work, calf pulling, and haycutting; but the semantics are important. Rural people don’t appreciate the pretentions of those who want to wear the mantle of Berrylike back-to-the-landedness without sweating for it—physically and financially.

There is such a thing as real urban farmers. I know of one in Portland, Oregon, who started her CSA farming several city yards–twenty, at one point, and not all of them near each other–and is now more happily working on a single site 7 miles from downtown.  I don’t know if she is renting or mortgaged, but she is certainly risking her living on her skill,  hard effort, and the weather.

Then there is Will Allen’s work at his organization Growing Power, where paid staff and volunteers are indeed farming real plots of land in inner city Milwaukee and Chicago, with a rural 40-acre plot in Wisconsin connected to a youth camp, plus several community gardens. I have never visited his sites but like what I read about them. Nevertheless, while this group is doing real farm work, Growing Power is more of a training/social justice program than a group of farms, as we would traditionally define the word, for the simple reason that its farms are not remotely self-sustainable financially. Mr. Allen’s nonprofit organization employs hundreds of people and trains many more, on limited amounts of ground, and to do so it must depend on grants to fill out its budget. (One of his growing sites is studying the financial viability of urban farming, and I will be interested to see what he finds.)

Other “urban farming” projects are more strictly community gardening efforts with a similarly strong splash of social services. As another small farm advocate I know says, while that is good work, it is not her work, and it is not farming, either.

I wish such efforts well—I wish victory to all victory gardeners. But in a country in which farmers are a tiny minority, and in which so few people actually want to farm, however much some might believe they have the heart of a farmer, we shouldn’t allow a perfectly good word to be hollowed out.

Calling our gardening hobby a “farm” and ourselves “farmers” is a way for us to fool ourselves that we are doing something more socially significant than we are—that we are part of a movement towards national self-sufficiency and greener living. But four tomatoes will not improve your global footprint very much, and a few square feet of vegetables will hardly feed one person even in July. You who grow a large garden are probably not feeding more than your own family, and if that garden requires real work and earns your neighbors’ respect (and mine), it is still not a farm. Calling it one encourages us to imagine that we aren’t terribly short of farmers after all–when we are, and when we should be doing something about it.

Urban farming also implies the idea—unproven and unlikely—that we can feed ourselves in the city from city ground, and don’t need to worry about our rural neighbors’ employment, small towns with dead economies, and leaching topsoil. But a country of 309 million souls and counting still needs its rural farmland, if its millions want to eat food that hasn’t been shipped across a sea.

I hate to say this, because I sound like the Vogue editor I heard on the radio in 2008, who like our former president believed we had a moral obligation to shop our way out of recession, but–you will do more for American farming by patronizing your local farmers’ market regularly than by any personal effort at “urban farming.” My comfort is that many patio tomato growers know this perfectly well.

Still, this iffy use of language and all the little backyard “farmer” flags on a website map of America are distractions from the real holes in our national patchwork quilt of farms—the real farms we need to produce appreciable amounts of food, so that we are truly more self-sufficient as a country, and less dependent on international commerce in order to eat.  No snack cracker’s marketing department is going to fill those holes.

Will Allen and Urban Farming

“Anything Less than Ownership is Unacceptable!”