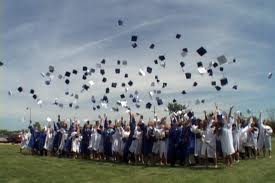 Twenty-five years ago today (I think; my memory is far from perfect) I graduated from Central Valley High School in Spokane Valley (then “Veradale”), WA. Herewith some thoughts on this momentous occasion from my past.

1) High school didn’t suck. Oh, there was a lot about it I hated, and as I think back on what little I can remember of my classes and locker-mates and student activities and all the rest from a quarter-century ago, there’s much that fills me with embarrassment or loathing. But the truth is that I have the tendency (a definitely non-unique one, I’ve discovered over the years) to make many experiences of mine out to be particularly crazy, difficult, or dramatic, when they were probably mostly just dull. Looking as best I can over the whole sweep of my 43 years, I was probably no more messed up or depressed during my high school experience than at any other particular period of my life, and maybe even less.

2) That said, I’ve never really been able to relate to those for whom high school was a wonderful or transformative or memorable time–one of whom is my wife. So many of her life-long expectations and relationships and perspectives were shaped during those happy years, and I kind of envy that. Despite having grown up milking cows and baling hay, I’m probably about as commercialized a suburban kid as any other white American boy of my generation, and so I also watched Sixteen Candles and Breakfast Club, and wanted that kind of experience.

3) But what, really, is “that kind of experience”? Part of it is educational, of course, but only a small part–mostly, anyone who talks honestly about high school, about the prospect, pitfalls, and possibilities of packing dozens or hundreds or even a couple of thousand of 15 to 18-year-olds together, ends up admitting that the larger part of that experience is social and emotional and cultural and sexual and civic. Which one of those parts looms largest for you, and what you saw happening in regards to it, probably determines what you think of high school, no matter what grades you earned or what they enabled you to do afterwards.

4) Within two years after my graduation, my mother and father had decided that they were going to home school the rest of my siblings. The family legend is that it was my experience as a student–a precocious, socially awkward, emotionally resentful, intellectually confused, bully-attracting kid–that mostly led them to this decision. It’s a decision which has extended on to most of my family; out of nine children, all of whom are married with children, six home school their kids.

5) Melissa and I aren’t one of them, and not particularly because my wife loved high school, or even public schooling in general. No, it’s because, on the one hand, we’ve actually been impressed by, and hence have strongly supported and invested ourselves in, the educational opportunities and outcomes we’ve seen benefit our children, and on the other hand, because we’ve never seen them be confronted by social or emotional or cultural or sexual or civic messages or environments that we deeply disapproved of–or if we have disapproved of them, we’ve never yet been unable to address and counter said messages or environments, with the result that the balance of pros and cons still tilts towards public schooling.

6) Besides, we’re believers in it. Trying to work out how to pay for or scale up (or down) public education is a never-ending argument, but by and large, as I put it once, “I like the idea of the state being a (partial) agent of education; insofar as the state is the reflection of the collective interest we all have in promoting and sharing certain civic goods with one another, especially the poor and marginalized, then it is an agency worth supporting.”

7) We have one daughter in high school now. She’s a smart and ambitious girl, more so than her parents (she’s going to summer school now, as she moves towards graduating a year early). Just the same, though, when she had the opportunity to enroll in Wichita’s International Baccalaureate program, she chose not to, preferring to attend our neighborhood’s own Northwest High School, because she wanted to stick with her friends and the part of the community which she knew best. That was a decision which made me proud.

8) Not that she doesn’t have regrets (there are always regrets to every decision, are there not?); attending East High School now for summer school, she’s struck by how much public schools, especially high schools, have adapted (been downgraded, I think) with the times. Northwest is your typical contemporary high school–a sprawling (part-Panopticon) campus of prison-like buildings, though decked out with the best technology and amenities which declining state budgets and limited bond-campaigns can afford. Older high schools like East, however, were often beautiful, multi-story buildings, constructed in the midst of an ongoing civic space.

9) There is a story there, a story of the decline of intact neighborhoods and stable jobs and cohesive families and the public schools which aspired to educate the people who lived and worked and loved in the midst of such. Time was that a high school education was the pinnacle, the finale, of the average American citizen’s learning; the reason why people had such strong ties to their high school’s football teams or glee clubs over the decades was because it was from there that they were ushered into the adult world of making careers and families. So of course high schools were imposing edifices; like churches and city halls, they were spaces where the surrounding community got  made. Yet when high school is transformed–thanks to the disappearance of reliable local work, the imperative of specialization and mobility, the breakdown of church and family connections, the shift of wealth away from the grounded vocations of land and manufacturing and to the distancing operations of finance and the “information economy”–into one more meritocratic step which the smart student (like my own daughter–and like, to be fair, her own parents as well) will negotiate as quickly and as efficiently as possible, looking at every class as something to maxmize for future college-application effect…well, if nothing else, it changes things. For one thing, the mind-numbing expectation to qualify everything that happens in light of some state-mandates assessment drives out much of the lunatic (but educational!) fun that putting so many kids together at least in theory ought to make possible (and the absence of which often just means all that remains, for some many students anyway, is video games and booze). For another thing, with such changes there’s no longer any particular reason to make the high school building itself such a permanent fixture. Far better to build more flat, easily reconstructed schools out in the distant suburbs and bus the kids in; that will make it easier to build swimming pools and tennis courts, anyway.

10) It’s a bad choice, if you couldn’t guess what my conclusion would be. When I went to high school from 1984 to 1987, we still had wood and metal shop and home economics classes; they could be avoided if you worked your schedule right (and many students, intent on landing that National Merit Scholarship, did just that), but they were there. For a long time now they haven’t been, at least not in the public schools I’ve seen (but I’m gratified to note that, in some small ways, they may be making a comeback; my daughter’s botany class planted tomatoes and potatoes this year, and maintained a greenhouse). More relevantly, it’s hardly an obvious conclusion that in streamlining high school into one more component of a globalized economy, the “public” which public schools were designed to serve have been helped. Yes, it’s true that, in all likelihood, the old economic model of local manufacturing and production will never return. And yet, it remains a fact that, by some measurements, going beyond high school and specializing in one or another professional field accounts for only around a quarter to a third of all the productive work out there.You can spin one solution after another about how to turn those non-specialized practical jobs into high-paying ones through some creative additional education, but in the end, high school could be, ought to be (as it once was, and for many still is), a way to give experiences that help complete citizens in their lives and communities and attachments, rather than simply rubber-stamp them on their way to someplace else. 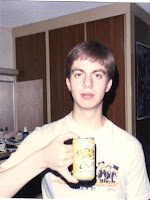 11) As always though, you roll with the changes, and try to build what you can out of where and what you have. I salute (though not without some reservations) those who, for reasons of religion or politics or personal preference, elect to take their kids out of public schools, as perhaps they were taken out themselves, and allow them to create a high school experience for themselves (and/or create one for them). For ourselves, thus far our local publics, as compromised as they are, have been worth supporting, just as, as I think back on it now, mine was probably worth the effort too, even if my own parents later drew different conclusions. I graduated, and I learned things, and I went through stuff, most all of which I’ve now forgotten. But there were some moments there–and while I won’t say I’m grateful for them, I will say, anyway, that they didn’t all suck. Considering that I was, after all, just a 15-18 year old dork at the time (note the proudly worn “Flock of ’87” duck t-shirt), that’s not a bad thing to be able to say.

Some Children Must Be Left Behind