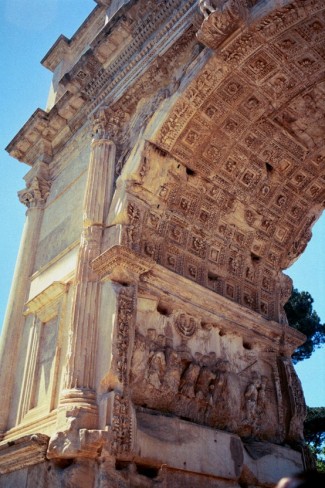 In my last essay, I took issue with the inescapable computer, that costly thing on the student’s desk in “good” schools, inducing the itch for instant “information” at the expense of knowledge and wisdom.  Now it’s time to notice how far that same compulsive rash had already spread over the body of the usual curriculum, before the computer came to scratch it and make it intractable.

One may, no doubt, use the computer to find historical needles in contemporary haystacks.  I use it as a Bible concordance and as a quick – and not wholly reliable – tracker of etymologies.  But the computer, like the television (and like the television now more than ever), blares forth the present and buries the past.  The wise and morose Preacher warns us that there is nothing new under the sun; the screen fairly shouts that there are only new things under the sun, new and improved, new and bold, new and challenging, new and progressive.  The only way we can endure all this noise, all this news, very little of which is actually new at all, is to give up comparing one day’s false novelty against the false novelty of the day before.  We surrender.  What did the President say today?  What will the House Speaker reply?  Who caught the latest no-talent singer on the beach with the latest no-talent starlet?  Did you see the trailer for the new Star Wars movie?  Where can I buy that new flea powder?

Now you may understand, reader, the daemonic urge to replace History and Geography with Social Studies and Current Events.

When we study history in earnest, not reducing it to our current preoccupations – not, for instance, making Jefferson into a tyrant because he owned slaves and Elizabeth Stanton into a heroine because she was a feminist – we climb a mountaintop, from whose vantage the human story may be seen in all its glory and its shame.  It is a liberating experience.  Machiavelli once wrote to a friend describing his daily life in exile from the Florentine court.  He’d wander over to the local watering hole, drinking and playing dice with the ruffians all day, but when he came back home he would change his clothes, don a clean tunic, and open his treasured works of Livy – communing with the ancients.

We see, atop that mountain, that human history is not a train running on one determined track.  We experience instead the mystery of the road not taken.  What if the corrupt and avaricious Carthaginian senate had granted Hannibal the additional supplies he needed?  What if the Athenians had not built their navy at the urging of Themistocles?  What if Alexander had been felled by a stray arrow in his battle against the Persian emperor Darius?  What if, the night before his final statement at the Diet of Worms, Martin Luther had submitted to the authority of the Church?  What if the eastern traders had never made it to China, and never found what we now know as gunpowder?  What if the devilish Hitler had not turned against the devilish Stalin?

We experience also the wonder of the ancient, the immemorial.  We look at a tombstone in a Roman cemetery, and read the inscription, sponsa optima, the best of wives, and we feel the pull of kinship across the centuries.  We look at the Arch of Titus and see, celebrated on its massive pillars, the destruction of Jerusalem and the raiding of the Temple, and we feel the prickle of astonishment, for those same Jews have returned, and the Roman Empire is long gone.  We enter the great library of John Adams, and it feels like a chapel – it is meant to feel like a chapel; and we handle the books that he handled, and see his own history in the light of the history that he read, from which he learned so much about the persistence of human folly and ambition, and the tenuousness of liberty.

The study of the past is also, often, an exercise in humility; and while the smug are nervously trammeled up in their self-opinion, the humble are free to rejoice in what is genuinely great or noble or beautiful.  The adulator of the new must believe that a great oblong in brick and glass and steel marks an “advance” in every respect from Chartres or Notre Dame de Paris, but the humble student of history has no stake in that game.  He is free to wonder at the glory that a supposedly benighted people could accomplish – and then free to wonder where the real artistic darkness is to be found, then or now.  The adulator of the new must believe that the free-verse skitterings of the hottest political poet are more worthy of attention and love than are the timeless lyrics of Wordsworth; that a poem that scratches the pustules of race and creed and sex and more sex is “relevant,” while Wordsworth’s “Michael,” a blank verse narrative about a farmer and the beloved son of his old age who strayed into dissipation, can mean nothing to a boy growing up fatherless in one of our cities, and ought therefore to be ignored.

History, by its very ambiguity, sets our judgment free.  The crisis of the instant (and everything of the instant, we know, is a crisis; there is a financial crisis, an educational crisis, an international crisis, a religious crisis; the baby is crying, the dog has messed on the floor, one nation has bombed another, the wife has gained twenty pounds) demands an immediate and decisive scratch.  History, not so.  Was Woodrow Wilson a good president?  Was he even a good man?  He detested the privilege of the rich at Princeton, and broke the grip of the fraternities.  He instituted discussion periods for every course in the humanities, to temper lectures with human conversation.  He believed that the black race was inferior to the white race, and accepted the fact on “modern” and “scientific” grounds.  He believed so strongly in securing international peace through his League of Nations, that he sowed the seeds of World War II in order to win approval for that same League.  He was a “progressive” who admired the writings of the conservative Edmund Burke.  He might have been defeated for re-election in 1916, were it not for several thousand votes in California.  He might never have won election in the first place in 1912, were it not for the boundless ambition of Teddy Roosevelt.  He was a stern moralist who never doubted the correctness of his convictions; he possessed both the strengths and the shortcomings of the scholar.

Nothing like that broad view of things is possible when one is down in the mire.  But what about the teacher in the mire?

Let me assert a general rule.  Education is liable to corruption to the extent that it turns away from fields in which reliable knowledge and expertise are necessary, towards those in which the teacher may indulge his opinions and predilections.  The study of medieval literature, for example, is less liable to corruption than is the study of contemporary poetry, for the plain reason that the former actually requires a great deal of hard-won expertise, in medieval language, in poetic forms now foreign to us, in medieval history and culture, and in some rather sophisticated habits of reading.  If you are going to do an honest job in high school teaching Chaucer’s Canterbury Tales, you have to know some Middle English, you have to know something of Chaucer’s predecessors Dante and Boccaccio, you have to know about the liturgical seasons of Lent and Eastertide, you have to know who Thomas Becket was and why that’s important, you have to know what a pilgrimage was, you have to be alert to Chaucer’s irony and to how medieval artists wove motifs subtly and not-so-subtly throughout the whole of a vast work – you have to know and appreciate quite a few things, and that means that both you and the students will be checking your contemporary itches at the door.  In short, it’s good to study Chaucer not only because he will provide you with an unexpected view of the current unpleasantness; he gives you also a chance to set that unpleasantness aside for a while.  You leave the same old same old news, and you pick up what is truly new to you because it is so old and strange.  You do so in the company of a teacher who does the same, and current events fade for a while into their well-deserved insignificance; and the experience of beauty does what partisan politics can never do, as it unites the soul of the teacher and the soul of the student in the love of something beyond their capacity to bring into being, but not beyond their capacity to admire.  More on this to come.