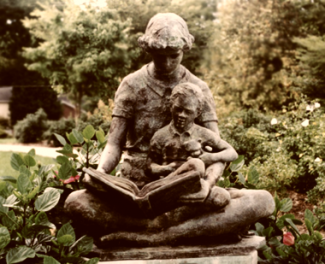 Imagine a new father looking into the eyes of his child.  A wisp of blond hair curls about the scalp.  The fingers, wrinkled like those of an old man, curl about his own finger.  He has blue eyes, but who knows whether they will stay that way?  There’s the slightest indentation in the chin, reflecting that of his wife, who cradles the baby in her arms and hums gently to him.

“Here is one,” says the father, “who will be a productive member of the labor force, and who will assist in the increase of the Gross Domestic Product.”

“Here is one,” says the mother, “who will be adept at the processing of information, so as to facilitate the attainment of a successful career.”

“Here is one,” says the father, “who will possess the capacity to embark upon independent research, who will present arguments that balance claim and counterclaim.”

“Here is one,” says the mother, “who will meet the Common Core Requirement anchor standards and high school grade-specific standards, which work in tandem to define college and career readiness expectations, the former providing broad standards, the latter providing additional specificity.”

I did not make that last sentence up.

In my last essay, I mentioned that our educational archons had come up with an idea even more foolish and inhuman and destructive than the consolidated school, the New Math, the basal reader, the folding of history and geography into Social Studies, the elimination of grammar, the computer on the desktop, et cetera nauseanda.  Behold, the Common Core Standards in English Language Arts and Literacy in History/Social Studies, Science, and Technical Subjects.

There are so many bad things to say about these standards, one hardly knows where to begin.  The field is full of rubble, and all I have here is a shovel and a small wheelbarrow.  Still, one must begin somewhere.

The archons, like my monstrous imaginary parents above, forget that a child is a human being, not a data processor, not a lever in an economic machine, not a researcher piling up the articles and books for a sufficiently exhaustive bibliography, meaningless in itself.  A child is a human being: and human beings are made in the image and likeness of God.  That implies that the child is made for goodness and truth and beauty.

But the Common Core Standards in English Language Et Cetera know nothing of all this.  For the archons, reading is a “skill,” and that is that.  What you read is of no import; only how complex the text is, judged according to various quantitative algorithms and a few subjective check lists that do not touch upon goodness, beauty, or truth.

That explains why the Standards jettison any systematic study of the history of English and American literature.  It also explains why, as the children grow older, silly ol’ poetry is progressively supplanted by “informational texts,” Supreme Court opinions, newspaper editorials, and technical manuals.  It also explains the suffocating pseudo-professional character of the writing that is required and praised.  Here, for example, is a high school senior writing about the blurry line dividing fiction from nonfiction.  Allow me to boldface everything vague and abstract, and to italicize every irrelevant sentence:

The modern world is full of problems and issues—disagreements between peoples that stem from today’s wide array of perceptions, ideas, and values. Issues that could never have been foreseen are often identified and made known today because of technology. Once, there were scatterings of people who had the same idea, yet never took any action because none knew of the others; now, given our complex forms of modern communication, there are millions who have been connected. Today, when a new and arguable idea surfaces, the debate spreads across the global community like wildfire.Topics that the general public might never have become aware of are instantly made into news that can be discussed at the evening dinner table. One such matter, which has sparked the curiosity of millions, is the recent interest in the classification of literature as fiction or nonfiction.

What’s wrong with that writing?  Everything.  There are platitudes – dull and absurd at once, as if people are actually arguing about whether Maureen Dowd is a fiction writer or just the usual editorial goof, while picking out the asparagus.  There’s the wearisome and phony enthusiasm over modern this and modern that.  The nouns are vague, “peoples” and “issues” are misused, “wildfire” is trite.  And none of it is to the point.

But the real problem can’t be cured by a visit to the English stylist.  It’s a problem that the authors of the Common Core Standards cannot recognize; just as a tone-deaf man cannot understand the beauty of the simple air that gives us Bach’s Jesu, Joy of Man’s Desiring.  The real problem is not technical, and is not primarily linguistic.  It is human.

A human being wrote that passage, but not as a human being.  He wrote it as a machine, as a Language Research Trainee, as a Prospective High-Prestige Academy Admission.  He wrote it as a boy-turned-ape, going through the English Language Proficiency Motions.  The passage is unrelieved by the slightest touch of beauty or elegance, of human feeling, of real address to a world of trees and dandelions and dogs.  There is one obvious observation – we have computers and the internet.  There is no wisdom, nor even the sprightly bravado of youth.  The writing is senile without ever having been young.

Is that too harsh?  Remember, this essay is held forth as exemplary, for a high school senior.We could hardly expect any better, when the archons themselves write in a clodhopping pastiche of political lingo and social-science lingo, impossible to parody.  Presumably they have been too busy processing “information” to have learned how to read, either.

But why should we care?  Won’t this bad idea die the death?  I’m not so sanguine.

That’s because this bad idea is part of a federal measure called Race to the Top (good ol’ RTTT, for bureaucrats playing with blocks).  Here’s a rare example of a directive whose name actually reveals something essential.  Not, of course, what the directors think it reveals.  The directors believe that all this stress upon linguistic “skills” will help us achieve the summit of the, the, we’re not sure, but it will be the summit!  What it really reveals is Life Under Compulsion.

What’s the race?  Why the induced panic?  Is someone somewhere going to invent some new form of mass marketing and human degradation before we do?  Say it ain’t so!  Is that little child going to waste his time being, rather than doing, and doing what his betters want him to do, and when, and why, and how?  Going to read books for the joy of reading, and the human wisdom to be gleaned from them?  Going to write meditations upon them, without dutifully scrounging up professional sources, focusing on what makes for careers?

The demon Uncle Screwtape reproaches Wormwood for allowing his charge to take a walk in the country to an old mill.  Can’t have that, and can’t read a book for the pleasure in reading it, rather than for the smoky anti-pleasure of saying pert things about it and making your way among people who matter.  I’d say that Screwtape runs our whole educational machine, but that does an injustice to the avuncular one.  He at least can write.