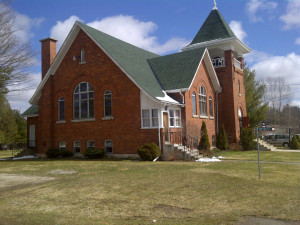 Darryl Hart wrote some time ago about the unwillingness of mainline Protestants to serve in rural churches. Employing Wendell Berry, Hart wrote:

In his essay, “God and Country,” Berry complains rightly that American denominations treat rural congregations invariably as “a training ground for young ministers, and as a means of subsidizing their education.” This stems from a two-fold disrespect for rural people. First is the assumption that persons not yet eligible for ministry are qualified to shepherd country folk. The other assumption regards successful ministry as one that occurs in conditions of high modernity, such as big cities. In other words, churches encourage young ministers to leave rural parishes as soon as possible and find a “normal” congregation.

I was reminded of this on a recent visit to Ontario.

Just southwest of Owen Sound, down Grey Bruce road 5, stands the tiny hamlet of Kilsyth, a rural community of about 100 persons. It is for many travelers an intersection whose inconvenient stop sign prevents them from blasting through at 80 km (oh cursed measurement!) an hour. It boasts of a “General Store and Bakery” whose food is remarkably hearty, as befits the townspeople, a school about to be closed down, and a small UCC church.

The United Church of Canada, the largest Protestant denomination in Canada, was formed in June 1925 by a coming-together of Canadian Methodists, Congregationalists, and Presbyterians. This strange brew has produced a denomination well known for its commitment to issues of social justice. Its original mission emphasized the spirit of unity leading to the formation of a “truly national” church. Its most recent statement, the “Song of Faith,” emphasizes the church’s marginalization in Canadian life, which it regards as a virtue in terms of its own ability to identify with and minister to the marginalized. The document studiously avoids doctrinal statements, emphasizing instead the more vaporous expressions that will eliminate all barriers to inclusivity, clearly the central tenet of the church’s self-image.

Critics of the church may point out that all the talk about inclusivity hasn’t made the denomination more attractive to people. While the population of Canada has increased, membership in the church has decreased. In the 1960’s the denomination had well over a million members, a number now down to under half a million.

In some sense, however, this matters little to the dwindling number of persons who weekly attend the Kilsyth UCC’s services. Originally founded in 1866 by Scottish Presbyterians, the church commissioned its current building in 1903, highlighted by a dust-up between the church elders and the builder over whether the gutters were hung properly, forcing a court settlement when the church refused to pay full price for the building. The minutes from 1903 express the excitement felt by the congregants when the new windows arrived at the train depot.

Some of the persons in Kilsyth trace their lineage back to the development of the Meaford Tank Range. At the inception of Canadian involvement in WWII, the government commandeered over 17,000 acres of land northwest of the town of Meaford ONT, displacing families from about 150 farms, four schools, and three churches. The families were promised their land would be returned to them after the war, but this never happened. They never received a fair price. Many abandoned farming altogether, while some of the wedded to the land moved south to Kilsyth, and some of those joined the church there.

A smallish structure composed of red brick, the church has a staircase which leads into a cramped narthex which passes directly into the sanctuary. The interior of the church is plain but has its original stained glass – pale pinks and blues forming basic geometric patterns. The only artwork looms over the choir loft behind the pulpit and can best be described as a disturbingly large Eisenhower-era depiction of Jesus surrounded by sheep. In one of the more unusual things I have seen, there were two large clocks in the sanctuary – one on the east wall and one on the west. The one on the west wall kept accurate time, while the one on the east wall was stuck on 9:37. I found out later that the east wall clock was given to the church by its first minister.

In addition to the clocks, the most arresting item in the church’s interior is a placard on the back wall, written in Old English script, with the words”For King and Country” at the top, and a list of congregants who have died in England’s wars. Opposite this, on the front wall to the minister’s left, was a large banner with the word “Shalom” on it. To the minister’s right was the Canadian flag and the church flag.

The responsive call to worship was construed broadly enough to insure everyone felt some sort of connectedness to, well, something:

God is in us/We are in God

Let us rejoice/Let us worship God

Symbols and words were employed to deepen the sense of inclusiveness. God judges, but graciously and mercifully, sort of in the sense that “Well, you probably shouldn’t have done that, but no worries.”  An elderly woman wearing a black print dress and a black cardigan was deeply involved in candleology and lit a series of candles before the congregants. Reading off her Blackberry, she informed us as to the purpose of each color being lit. Blue, for example, was soothing, so lighting a blue candle would remind us of how God comforts us.

It’s a tradition of the church to celebrate its anniversaries by inviting someone from a different tradition to lead the service. In this instance the invitee was the husband of one of the congregants and – in the interest of disclosure – a long time friend of mine dating back to our freshman year at Calvin College. I wasn’t sure how a Christian Reformed sensibility would fit into a UCC setting, but my friend dutifully behaved as a guest ought. The sermon was, for me at least, the highlight of the service, for it deftly wove Scriptural and doctrinal themes into the particularity of that congregation. Meditating on the story from the Gospel of St. John of the Samaritan woman at the well, my friend argued that the church had long been intentional about fulfilling the mission of accepting all to and for Christ.

(As an aside, as a Catholic the sermon filled me with no small amount of sadness over the state of homiletics in the Catholic church. When I first converted to Catholicism it was in part motivated by how over-stressed preaching was in the Calvinist tradition, and how rarely it seemed to deliver on its promise. As a result, I went into Catholic fellowship in part not expecting good preaching and actually turning it into a virtue of sorts – the Eucharist being the centerpiece, after all. In that sense, I’ve not been disappointed. Sunday after Sunday we endure pathetically wrought homilies. We tolerate the laziness of priests and deacons who can’t be bothered to construct a thoughtful and inspiring message. Sitting in this church this Sunday reminded me of the power and moving beauty of a well-wrought sermon. This is not demagogic Krustianity, but rather a form of meditation that elevates the commonplace as it also makes God visible to us. We should expect no less.)

Jesus was at Sychar when he met the Samaritan woman. The text is careful to note the place, and the encounter occurs at the touchpoint of the particular and the universal. Salvation is from the Jews, but open to all. The sermon stressed the ways in which the fulness of salvation, the meeting with our God, still occurs at particular times and particular places. This localist sensibility made Christ’s words seem more embodied, more real.

It was disappointing, then, to hear the minister address the congregation after the sermon by noting how we were all living in a “global village” whose most important issue was “inclusivity” while noting that “women’s interests” had a special place of importance. Kilsyth UCC, she said, was obligated both to “meet the needs of our diverse and inclusive church” while being all about “inclusivity and crossing borders.” I looked around. 25 white people over the age of 50 didn’t strike me as a particularly “diverse” crowd, but then I hadn’t gotten to know them. To an outsider, there was nothing particularly or obviously diverse about the makeup of the church, nor was it clear why that would be a virtue. Cant blinds one to what is present.

The Kilsyth UCC is a dying church. The UCC has seen rapidly declining numbers in general, and at Kilsyth they are now lucky if the church is one-quarter full on any given Sunday. Indeed, the congregation has gotten so small that the minister is now in charge of three different Grey-Bruce churches. When, while sharing lunch with some elderly women who had been part of the congregation for over fifty years, I asked them how the church had changed, their immediate answer was “attendance.” Another noted that for years the church doors had always been open, and the children had free rein to go practice the piano or organ inside the church. Many of them talked about how the church had been a centerpiece of their social lives. Now, as a result of some hooligan defecating in one of the three churches, all the churches were closed. These women lamented the fact that the doors were no longer open to the people who lived in Kilsyth.

I asked them, given these changes, what was it about the church that appealed to them. One woman, who had been attending since 1948, looked at me quizzically. “It’s my home church” she said simply. Only a callous soul would dismiss those words as the force of habit. She felt deeply connected to the place, and it was at the place, that particular place, that she came to meet God and her neighbors every Sunday.

One can’t help but feel that denominations become more interested in the denomination than in the churches that constitute them. They reach out to the culture, and in the case of the UCC in a very accommodationist fashion, in an effort to make themselves relevant. But in the process they make themselves less relevant to the congregations where people have lived and worshipped for generations. All the talk of the leadership about “inclusivity,” “diversity,” and “outreach” comes across almost as a form of mockery. It’s as if there can be nothing noble or deeply moving about a local church serving a local populace and aspiring to nothing more than bringing the good news into the lives of this community. But then, the message of the Gospels seems to have been lost at the higher levels.