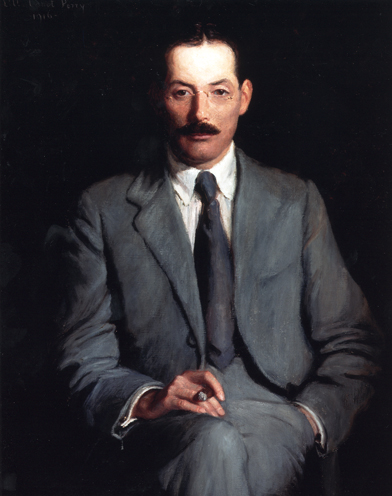 Every semester, on the first day of the poetry courses I teach, I hold up Lilla Cabot Perry’s portrait of Edwin Arlington Robinson and tell the students an only slightly embellished anecdote. This first great American poet of the 20th century, I begin, once stared out from the coast of Maine at the dark Atlantic waters stretching into the horizon’s gloom. A flask in hand, he watched the waves and considered the prospects of his chosen career. In Gardiner, where he lived, six persons read poetry out of a population of 6,000; there was about an equal number of drunks. Robinson estimated that the proportion held for the entire country. (The critic D.H. Tracy has speculated that this proportion is about right today, as well.) Perhaps a tenth of a percent of Americans appreciate poetry. With this sobering figure in his head, the aspirant poet twisted his flask and took another drink.

That you have enrolled in a poetry course—by choice, no less—automatically makes you a rare breed, I tell my class. Robinson would be happy.

That E.A. Robinson ever did know happiness should be a cause of wonder. As the poet Robert Mezey recalls in his edition of Robinson’s poems—and as Scott Donaldson, in his recent biography of the poet, describes in detail—the facts of the poet’s life would not seem a recipe for contentment. Born in 1869 in Head Tide, Maine, Robinson was the third in a family of three boys. His parents had been hoping for a girl, and such was their disappointment that they neglected to name the child for many months. When they were finally prevailed upon to do so, at a lawn party in the summer of 1870, they held a contest to name him by lot. A woman from Arlington, Massachusetts, drew the name “Edwin” from a hat, and so the infant had a name at last, clattering though it was with an ungainly triple rhyme that he would always loathe . . .

You can read the rest online or in the pages of The American Conservative.  Better yet, you can find five friends and make your own poetry, just as Robinson did. Better still, you can help a young poet buy his next drink, by purchasing The Violent and the Fallen.

The Uses of Nostalgia