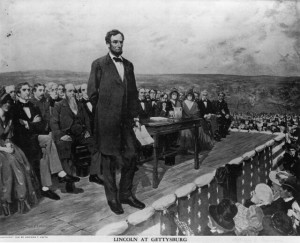 My wife will be the first to point out that I’m not much of one for marking anniversaries, but it seems – to use Lincoln’s language – fitting and right to take note of the fact that today is the 150th anniversary of The Gettysburg Address. Like many Porchers, my views concerning Lincoln are conflicted. At his best, he had the ability to lift ordinary people to “the better angels of their nature.” (There’s a lovely film depiction of this in John Ford’s Young Mr. Lincoln). He is clearly the greatest rhetorician in the history of American politics. He presided over the nation at the knottiest moment of its history – and no matter how critical of Lincoln one might be, one ought to acknowledge the difficulties he had to face. My own view is that he would have been better off letting the South go, but I also acknowledge that is not a simple proposition which would have had no long term consequences. In many ways he was a shrewd and practical politician who understood the complexities of political life (Steven Spielberg’s otherwise execrable “Lincoln” at least got that right).

At the same time, he was a man too ready to make war. His whiggish views on economics and politics are problematic. He was a man whose ambition was “an engine that knew no rest.” He abused executive power. He had complex and often contradictory views on race and slavery. Perhaps most significantly, he has enshrined in national consciousness a civil theology that is, from the Christian side, heretical, and from the political side, a justification for the accumulation and exercise of power. It is a theology that is as comprehensive as it is sloppy, for he’s not a coherent thinker. But it resonates deeply in our collective consciousness.

Around the web today are a variety of reflections on Lincoln’s speech. Over at The Public Discourse Matthew Holland borrows on Gary Wills’ brilliant reading of Lincoln while arguing for a renewed understanding of what it means to be a nation “under God.” (I’m tempted to ask if there’s any other kind.)

Tommy Kidd, over at The Anxious Bench, asks what happens when “the new birth of freedom” is “tied to a nation’s history, rather than a redeemer’s saving work.”

Richard Gamble’s “Gettysburg Gospel”  at The American Conservative ought to be read by everyone troubled by civil religion, for it sees in Lincoln’s speech “the 19th-century’s potent ideologies of nationalism, democratism, and romantic idealism.” Gamble writes:

The point is to draw attention to how much Lincoln compressed into his brief speech. His civil philosophy, indebted to German Idealists like Parker, distilled something as complex, diverse, untidy, and contested as the formation of the American republic into one proposition, and then from that fragment of a fragment of the past extrapolated both the essence of America in 1863 and its purpose in the future. No part of any sentence of any document, even if that document is the Declaration of Independence, can carry this load.

In dissociating Lincoln’s politics from his rhetoric, Sean Wilentz  at The New Republic accomplishes in some ways the opposite. Reviewing much of the secondary literature on Lincoln, Wilentz downplays the speech’s significance but plays up Lincoln’s Machiavellian tendencies. Still, even Wilentz concedes that Lincoln wasn’t about power alone but about an idea, and the unrestrained use of power in service of that idea. The essay is a useful reminder about the reality of political life and that disagreement can’t be made to go away, and frustration with political bickering often leads to the use of force. One is reminded of Hegel’s observation that tragedy involves a conflict between two sides when there is no clear right, or two conflicting rights. The essay further serves an important democratic principle: that cults of personality are death-knells of self-governance. It’s a long essay, but worth reading.

I’m not an American propositionalist. Whatever America is, it can’t be reduced to a simple or basic proposition. Whatever is true of Lincoln, he is a signal contributor to the ongoing American attempt to understand politics within the general context of redemptive history, to see politics in its microcosmic representative fashion. For that reason alone, and the utter compactness of its formulation, the Gettysburg Address remains relevant.