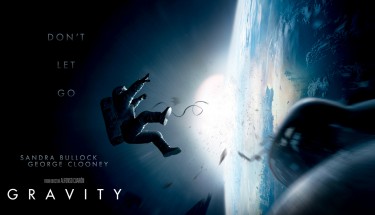 If a rainbow is a symbol of hope, there’s a bright ‘bow in the sky’ to be found in Alfonso Cuarón’s Gravity.  And, just maybe, the movie might be an actual summons, in 3D, to a full-fledged Chestertonian revolution.  In what is perhaps the most concise, brilliant and subversive piece of proto-Porcher literature written in modernity, (the conclusion  What’s Wrong with the World), Chesterton  wrote:

Whatever else is evil, the pride of a good mother in the beauty of her daughter is good.  It is one of those adamantine tendernesses which are the touchstones of every age and race.  If other things are against it, other things must go down. If landlords and laws and sciences are against it, landlords and laws and sciences must go down. With the red hair of one she-urchin in the gutter I will set fire to all modern civilization.

My wife and I went to see Gravity over the weekend:

“Was that just a summons, in 3D, to a full fledged Chestertonian revolution?”, I said to my wife, with my 3D glasses still on, right after the movie ended.

“Listen, Sauter”, replied my wife, (who calls me by my surname only in articles, was turned off by my 3D glasses, and deserves pity as she actually understood my question), “you’re reading too much into this, as usual.  This is not a Kubrick film with hidden meanings about supposed Saturn Death Cults and such.  It was just an entertainment.  So, if I were you, I’d let it rest.”

I didn’t let it rest but she had put me onto something.  There was a Kubrick connection.

Many reviewers of Gravity have commented on the movie’s connections to Stanley Kubrick, especially his 2001 : A Space Odyssey and even how Gravity could bill itself as something like “Kubrick in Reverse”.   Easy to contrast are Kubrick’s ascent from the body and away from the earth, (beginning with apes in the first part “The Dawn of Man”, moving into space suits, away from the earth, and onto some sort of trans-human ascent in dimensionless space), with Cuarón’s beginning with a vision of decadent, dilapidated space, immediately followed by a disaster there,  a shedding of space suits and a return to the body and the earth and, specifically, a gooey, watery, muddy place congenial to the author Genesis as mise en scene for fruitful, and not stillborn, new beginnings.

What I’d like to highlight, in addition to these insights, is the stark contrast of worldviews in the respective films and the central importance of human relationship as the driving force of Gravity.

In a 30th Anniversary review essay, Roger Ebert commented on 2001:  A Space Odyssey:

What [Kubrick] had actually done was make a philosophical statement about man’s place in the universe, using images as those before him had used words, music or prayer. And he had made it in a way that invited us to contemplate it–not to experience it vicariously as entertainment, as we might in a good conventional science-fiction film, but to stand outside it as a philosopher might, and think about it.

My wife had been right.  Gravity was indeed, “just an entertainment”, but, that actually played in out in its favor in my estimation, and even its use of 3D, which is usually an annoyance to me.   After all, Kubrick’s presumed philosophical “stance outside”, to use Eberts words, (Can we also call it an “Archimedean point”?), was  yet another revealing detail of its director’s worldview.  I recalled Hannah Arednt’s famous 1963 essay, “The Conquest of Space and the Stature of Man” where the hubris of presumed “Archimedian points” is revealed as being replete with possibilities of “blowback” the likes of which are highlighted in Gravity.

The situation, as it presents itself today, oddly resembles an elaborate verification of a remark by Franz Kafka, written at the very beginning of this development: Man, he said, “found the Archimedean point, but he used it against himself; it seems that he was permitted to find it only under this condition.” For the conquest of space, the search for a point outside the earth from which it would be possible to move, to unhinge, as it were, the planet itself, is no accidental result of the modern age’s science. This was from its very beginnings not a “natural” but a universal science, it was not a physics but an astrophysics which looked upon the earth from a point in the universe. In terms of this development, the attempt to conquer space means that man hopes he will be able to journey to the Archimedean point which he anticipated by sheer force of abstraction and imagination. However, in doing so, he will necessarily lose his advantage. All he can find is the Archimedean point with respect to the earth, but once arrived there and having acquired this absolute power over his earthly habitat, he would need a new Archimedean point, and so ad infinitum. In other words, man can only get lost in the immensity of the universe, for the only true Archimedean point would be the absolute void behind the universe.

Pride, as they say, goeth before a fall!

In contrast, and though using technological wizardly, the one thing you cannot do in the imaginative vision of Cuarón is “stand outside”, certainly not with space junk and human tears flying at you.   The viewer “vicariously experiences” space and is pulled into the movie in a way that contrasts strongly with Kubrick’s Cartesian, philosophical, contemplative, abstract, fleshless, rootless,  Archimedean perspective that Arednt and Kafka saw as being “used against itself”.  Eventually, both Arendt and Cuarón seem to imply, all this quest for Achimedian points in philosophy in politics, even in Cinema), and played out in space travel, is going to lead us to hoisting ourselves, in one way or another,  on our own Archimedean petards.

The other thing that spoke to me powerfully and was, along with the force of gravity itself, the driving momentum of the earthward trajectory of Gravity was the relationship of the one survivor, Ryan Stone (Sandra Bullock who, playing an astronaut, has her hair cropped short), with her deceased daughter.   I found this interesting and evocative.   For Chesterton, the foundation of a world-inverting revolution began not with philosophical Archimedean points, but with the relationship of a mother and her child and, oddly enough, hair.

In using the example of a science-backed plan hatched in England to cut the hair of the poor in order decrease the frequency of lice, (a decidedly top-down approach to things), Chesterton famously provide an example of a different approach: “Whatever else is evil, the pride of a good mother in the beauty of her daughter is good.”

That little urchin with the gold-red hair, whom I have just watched toddling past my house, she shall not be lopped and lamed and altered; her hair shall not be cut short like a convict’s; no, all the kingdoms of the earth shall be hacked about and mutilated to suit her. She is the human and sacred image; all around her the social fabric shall sway and split and fall; the pillars of society shall be shaken, and the roofs of ages come rushing down, and not one hair of her head shall be harmed.