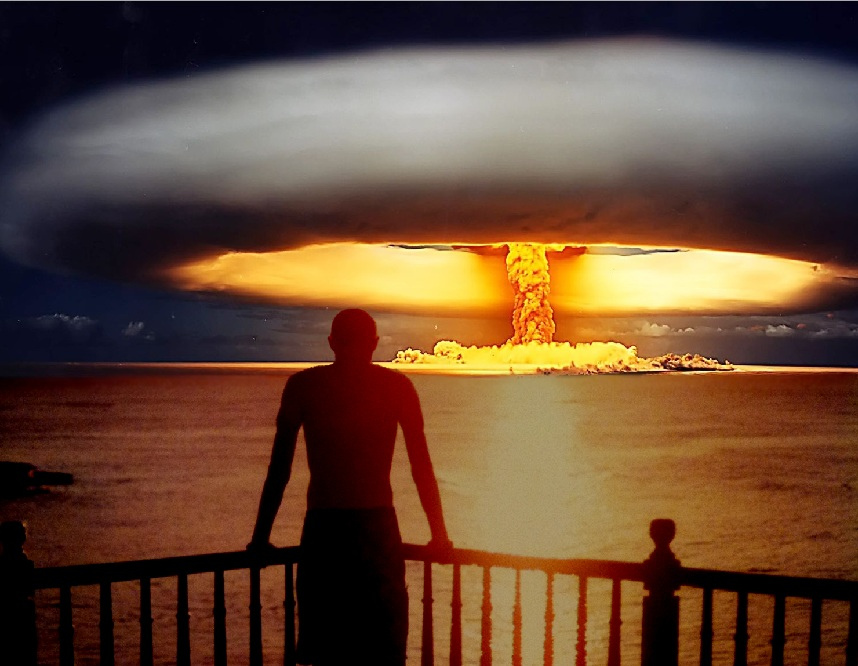 If it’s your thing — and it’s certainly not everybody’s thing — it’s not a bad time to be an apocalypticist.

A few weeks ago, Pope Francis once again implored people to read Robert Hugh Benson’s novel of the Antichrist, Lord of the World, a book I read with great interest 20 years ago as a theology student and read again last summer. I like it. And I’m glad to see, too, that at least some people are drawing some connections between Benson’s novel and what we English speakers can glean of Michel Houellebecq’s novel Submission, a book at the center of the Charlie Hebdo attack; Namely, that both novels portray a gradual, silently-accepted collapse of Europe. The big difference is Benson portrays it as the work of the Antichrist and Houellebecq famously withholds comment.

There are connections as well between Benson’s Lord of the World and the Russian philosopher Vladimir Soloyov’s apocalyptic sketch, “A Short Tale of the Antichrist” which were not lost, at least, on the good editors of Wikipedia. The irony of the Antichrist taking the world’s stage as a great humanitarian is the commonality between those two works. Personally I think it’s a strong possibility since Lucifer is, after all, the angel of light.

Along those lines, I had fun several years ago conjecturing that Solovyov’s humanitarian Antichrist might possibly be identified as the “global-ethicist” and dissident theologian Hans Küng, but, in a turn of events, and in a shift of playbooks, as it were, from Solovian to Bensonian apocalypticism, (and in an eerie correlation with one of the main story lines in Lord of the World, that of “Mabel”), Kung as of late been making apocalyptic news by considering moving to Switzerland for assistance in committing suicide due to his sufferings associated with Parkinson’s.

As for how to take his suicide poison, Kung is quoted as saying, “I can do it like Socrates”.

Wow. I pray for Kung and for his very real suffering, but at the same time I echo Carl Trueman’s thought at First Things: “One hopes that that is merely intended as a reference to the method of his departure, not his perception of its (and his) historic significance.”

Like Kung, Socrates does have a relation to apocalyptic thinking, but not as the poster boy for assisted suicide. More on that below.

Apocalyptic thought, it has always seemed to me, can provide a backdrop against which to see current goings-on, which obviously constitute the foreground, and it helps us to see them in new and interesting perspectives. It ‘unveils’ them, as the word implies. Robert Hugh Benson, for what it’s worth, actually gave us two futuristic takes on the fortunes of the Church and Europe: One bleak, envisioning near-eclipse, (Lord of the Word), and one bright, envisioning restoration, (The Dawn of All). Solovyov, as I read him, also gave us something of a two-sided take on his own concerns for the future. At the end of his life, (d. 1890), and shortly before he wrote a “Short Story of the Antichrist,” he penned a brilliant essay called, “The Drama of Plato’s Life,” (1898). In addition to being set in the past, this essay, bereft of futuristic takes on popes-in-hiding and worldwide clashes, is decidedly local. It’s an apocalypse for Porchers.

Hans Urs Von Balthasar, no small-change observer of thought and history, considered Soloyvov life’s work as, “the most universal speculative creation of the modern period” (Gloria III, p. 263), and “The Drama of Plato’s Life” is no exception. Some scholars think it was the result of Soloyov’s attempt to come to terms with the drama of his own life and his own failures as well as personal attacks he suffered. The passion found in this essay might be one element that could support that conclusion. “The Drama of Plato’s Life,” maybe because it’s so personal, brings the macro-cosmic and macro-historical forces talked about in Benson’s work down to the level of everyday life. It’s an apocalypse set not at some remote future time in history but in the midst of history. Essentially, it’s the story of a human being, a walking tertium quid, caught in the cross-hairs of certain nefarious forces that make their presence in history felt by frequently playing puppeteer to the factions liberal and conservative, the left and the right, that in their thirst for money and power, seemingly can’t understand words like love, truth and affection.

This is not a tract against individuals of either liberal or conservative persuasions. We’re all probably born with some sympathy one way or the other. It simply describes what happens when people of one disposition or another take on the role of a faction, a mob, or a crowd. The French Catholic novelist Jean Sulivan taught me to see in the Gospels that Jesus, whenever a group of individuals morphed into that different phenomenon called the crowd, He usually took off and headed for the other side of the lake or something. He knew his message could not be heard in such a setting. Sulivan says:

A mob, to the degree that it is a mob, can’t hear a spiritual message. When a crowd (a large number gathered in one spot) or the public (a large number spread out over a wide area), gets excited, it’s never on behalf of truth. Truth is used as a pretext. A crowd is governed by physical laws. To love the crowd — that is, the individuals who make up a crowd — means first keeping some distance from it. … His message is is not addressed to the crowd, but to each individual in the crowd … Terms like mankind, humanity and crowd aren’t in his vocabulary. (Jean Sulivan Morning Light, 43)

Speaking of crowds, the novelist Stendhal once characterized the perennial terms of the debate, describing the crowd of the right as, “mad, selfish and polite, adoring the past” and the crowd of the left as “mad, generous and dull, adoring the future. A timeless caricature, I feel. Solovyov’s genius, in it’s own way, also captures the game between these two mock opponents and uses the death of Socrates as its central pivot point. The general outlines of the conflict, and the self-deception of the two factions involved, the broad contours of which get played out to this very day, are a form of apocalypse. One can almost sense in his writing the background “authorities and powers of this dark world,” (Ephesians 6:12) that manipulate this show.

In describing the ancient Sophists (the liberals), Solovyov portrays them a party of the colonies, caught up in the relativity of values because of the existence of other cultures and values. He sees these liberals, then, as wallowing in their own self-supposed intellectual superiority, and accusing the conservatives of being a) stupid, b) subverters of the future, and c) haters of people with different backgrounds. This description is so interesting because of the timelessness of the accusations. On the other side, he portrays the ancient conservatives (the right), as accusing their opponents of being “godless and irreligious people,” subverters of the past, and haters of the family and ancestral traditions. Again, strikes me as timeless.

What’s more interesting, however, is Socrates’ accusations against both of these factions, which get him in trouble. To the left, he says, (and here I’m paraphrasing Solovyov’s understanding of this conflict), “It’s all very well that you want to consider and test by critical thought all that exists or does not exist. The pity, though, is that you are bad and fraudulent thinkers and have no idea whatsoever either of the aims or methods of good thought. Your talk is, for the most part, completely idle. It’s not about truth but is, in fact, the result of your lust for power and your desire to impose on others your empty verbiage.” That’s heavy.

And to the right he says, “You are perfectly right and deserve commendation for your desire to conserve the basis of society — this is the matter of highest importance. The misfortune however, is that you are bad conservatives. You know not what or how to conserve. You grope about like blind men. Your self-conceit about moral superiority is the cause of your blindness.”

On one side, then, there was conceited intelligence without the enlightenment of truth that was, at root, a desire for power. On the other side there was a conceited faith that was unenlightened by vision and a was at root desire for self-righteousness, backed up by wealth. Solovyov referred to the conservatives in this conflict as “obscurantists.” The idle talk of the left and the obscurantism of the right converge on enlightened truth and kill it.

According to Solovyov, the accusations against Socrates, that led to him drinking the hemlock, was that he introduced strange divinities and perverted the young. His real effect on the young, says Solovyov, was that he “undermined their respect for unenlightened and foolish guides.” Like Kung?

“What possible answer to Socrates,” Solovyov asks, was there to these allegations other than “the cup of poison?”.

The high stakes of this apocalyptic drama continue to this day.