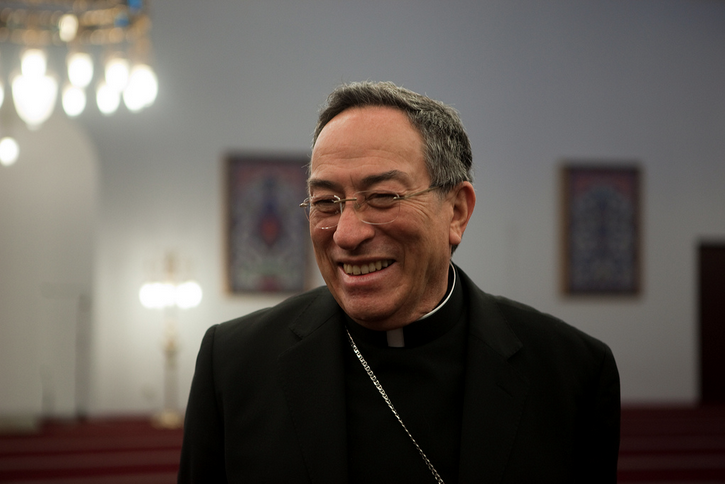 A cleric with the ear of Pope Francis recently sent Catholic defenders of free markets into a tizzy. At a press conference, Cardinal Oscar Rodriquez Maradiaga of Honduras tossed out this pithy jab:

The ideology surrounding environmental issues is too tied to a capitalism that does not want to stop ruining the environment because they don’t want to give up their profits.

In response, First Things blogger Maureen Mullarkey, whose previous haymakers at the Vatican already led to an awkward wag of the finger from the FT editor R.R. Reno, is throwing some big punches again. The artistic Mullarkey often has something worthwhile to show and tell — consider this haunting introduction to black and white photographer Lu Nan — but any survey of her posts rather quickly reveals that her least favorite political hue is green. I will concern myself only with Mullarkey’s substantive complaints about the Maradiaga quote and leave it to others more knowledgeable of the personalities and politics across the Tiber to judge whether the bulk of her jarring “birds of a feather” critique of Pope Francis and his collared eco-associates is justifiable or an exercise in character assassination.

In Maradiaga’s ham-handedly delivered thesis, Mullarkey sees a “dime store bolshevism” at work — apparently thanks to his use of a personal pronoun. She denotes the “they” in his statement with a “[sic].” Granted, Mullarkey has uncovered a technical violation of the rules of the English language, and I also generally concur with her broader factual assertion that the practice of capitalism “has produced sustained growth in living standards for more people than any other system ever devised.” Even if human physical wellbeing is not the only measure worth analyzing, that’s nothing at which to scoff.

But while we are diagramming the sentence, it is worth noting that Maradiaga does say “a capitalism,” not “all capitalism.” Are there manifestations of what is generally called “capitalism” that put economic profit over environmental health? Certainly, there are. Sadly, history is replete with water bodies and landscapes and people devastated by a human drive for short-term gain. From the flaming Cuyahoga to the hills of California torn apart in the quest for gold, we need not look far for dramatic examples.

Defenders might argue that such black-eyes are better labeled as “tragedies of the commons” resulting from inadequate property rights or an ineffective rule of law, both necessary components for real capitalism. There is some merit to these caveats, and yet it cannot be denied that most of those who would have been identified as the real capitalists of their day did not shy away from reaping the wealth made possible by such theoretically imperfect means. Looking over the leveled mountains of Appalachia today, there seems to be little indication that we have learned much from our mistakes. Despite all of his grammatical awkwardness, Cardinal Maradiaga’s use of “they” rightly reminds us that an economic system is not an impersonal machine but the end result of decisions made by flesh and blood people, whether or not they cloak themselves in a fictitious corporate body.

Mullarkey will have none of this, though, and she pounds away:

The pathetic fallacy inherent in ascribing a malevolent want to complex market systems is demagogic. Personification is a poeticism, not a means of critique.

Her mistake is to overly systematize and thereby de-moralize what is often complex, yes, but which never ceases to be personal and spiritual. The invisible hand — often benevolently personified, some might say deified, by many that Mullarkey would likely count as allies — is actually the collection of choices made by millions of still human hands tied to hearts and minds. Those hearts and minds remain susceptible to temptation, including the temptation to wash one’s hands of responsibility because “the system made me do it.” Pope Francis, with a likely assist from Maradiaga, warns in The Joy of the Gospel of the “idolatry of money and the dictatorship of an impersonal economy lacking a truly human purpose.” That’s a caution that tracks well with Jesus’ strong words against serving Mammon, for him a personified demonic force. (Was Christ being demagogic as well?)

In his most recent comments, the cardinal has raised the important question of whether certain people who call themselves “capitalists” properly balance an often legitimate desire for profits with the moral imperative to care for God’s creation.  Remember, by applying religious values and ethical judgment, humanity — at least a significant subset of it — has in the past made seemingly uneconomic decisions like taking slaves and children out of the labor equation. Do we now face a time when we should similarly take carbon out of the means of production mix? That is a complex question with multiple fingers in the big pies of morality, science, and economics, but it is an issue worthy of focused and timely attention.

Following one of Maradiaga’s previous zingers calling free markets “a new idol,” an editor at Reason magazine responded by characterizing his speech as “profoundly ignorant.” Yet, as if to confirm the assertion of idolatry, the “Hit & Run” blog post also claimed that markets had the “power to [eliminate the structural causes for poverty] without relying on the oft-misguided and easily appropriated wisdom of men.” Sounds pretty god-like to me. It’s a manifestation of the libertarian dream that free markets can be, as T.S. Eliot once diagnosed the delusion, one of the “systems so perfect that no one will need to be good.” Mullarkey seems to be nodding off to that same lullaby.

True, she supplies an asterisk by saying, “Capitalism’s imperfections are real. No one denies that; nor does anyone deny the validity of reasonable regulation.” That’s helpful but only seems to beg the question “What’s reasonable?” Mullarkey makes clear her belief that holding the anthropogenic temperature increase of the industrial age to 1.5 degrees Celsius is most certainly unreasonable, but why this is so or whether she finds any speed setting on the fossil fuel treadmill too risky is left unsaid.

Mullarkey instead prefers to say that Maradiaga’s one sentence statement “reveals the demonizing temper of old Soviet tracts.” I have no idea whether Maradiaga, influential enough to be called the Vice-Pope by some Vatican watchers, is a crypto-communist as Mullarkey implies. Even if he is — and as rightly troubling as that would be — the cardinal still could have a valid point or two floating around in his head, as may Mullarkey.  Real problems can produce complex responses, including overreactions mixed with truth.

Despite its excesses, the so-called “Red Scare” of the 1950s flowed from the fact that there was a scary problem that merited serious attention. And a case can be made for currently casting either Maradiaga or Mullarkey in the role of Joseph McCarthy. Is the cardinal searching out a real threat in climate change but rashly including all capitalists on his blacklist? Or is Mullarkey on a mission to ferret out too grand of a green conspiracy and unable to fathom that there could be people (and popes) of goodwill in her line of fire? Perhaps, neither. Perhaps, both.

Of course, Pope Francis’s pending environmental encyclical is a major driver for all this angst and excitement. The current Vatican regime poses a test for an American conservatism with its economic and religious wings. Social conservatives certainly remain players but the trend has been for the GOP to align itself more and more with what author Robert Nelson has called Economics as Religion. Further, free market fundamentalists increasingly see themselves in a struggle with what some deem “watermelon” environmentalism — green on the outside, red at its heart. In another book, Nelson deems the clash of econs and enviros The New Holy War.

Saint John Paul II and “Green Pope” Benedict XVI said things about the poor, materialism, and creation care quite consistent with what we now hear from Francis, but the Vatican’s logarithmically increasing emphasis on the environment has roughly coincided across the Atlantic with the Republican base moving at a similarly rapid pace from a light green conservationism to indifference to now often aggressive anti-environmentalism. This growing divergence is forcing some of the Catholics under the Pope’s charge to ponder just what the noun is in their belief system: are they politically conservative Catholics or religiously Catholic Conservatives? Which is the core conviction and which is the lesser modifier? Given the Pope’s clear positions on issues like abortion and marriage, liberal Christians are theoretically on the same hook too, but with thinner attachments to tradition and ecclesial authority this is a barbless hook that makes wiggling off (a.k.a. evolving) much easier.

Most people will not consciously and directly choose between their faith and an economic ideology. The mental gymnastics are usually more subtle as the two slowly intertwine in the mind, manifesting their hybrid selves in forms as varied as Marxist liberation theologians and conservatives who profess a love for both the Suffering Servant and Atlas Shrugged. As for applying this tendency to the GOP, at least one political operative is blunt about the situation. Sam Clovis, an Iowa conservative and a Catholic, approvingly predicts to Politico that 2016 primary season participants will act as “Republicans first and Catholics second.” When launching First Things some 25 years ago, Richard John Neuhaus noted, “Authentic religion keeps the political enterprise humble by reminding it that it is not the first thing.” From ages past to today, from the Sistine Chapel to a straw poll in Ames, the Tempter has ever whispered a different sort of logic.

John Murdock rang in the millennium at St. Peter’s in Rome, spent a decade plus as an attorney in D.C. and now writes from his native Texas.  Online, you can find him at johnmurdock.org.