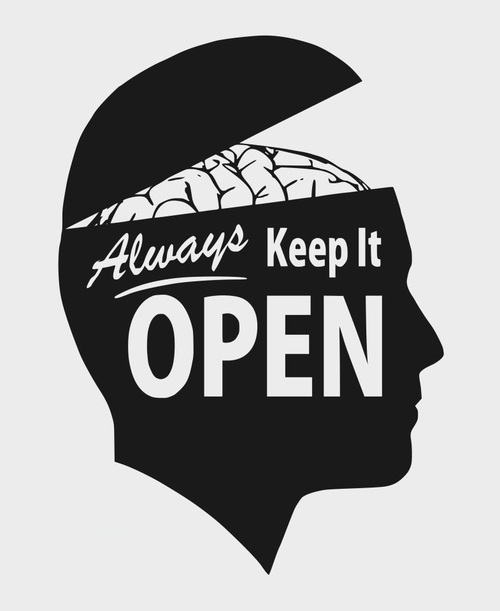 “Be open-minded.” At times in my life I’ve been given this directive, while other times I’ve been praised for how “open-minded” I am. Despite how over-“educated” I am, I detest this language of open- and close-mindedness. It’s one of those things we say out of habit without thinking enough about what we mean. I suspect people idolize and resort to it as a kind of trump card, a name-calling tactic that can be used when they’ve run out of ideas.

This phrase “open-minded” is often used by those who consider themselves liberal or progressive. It’s a rhetorical device, of course, aimed at persuading a more conservative person or at least a person who has expressed a traditional viewpoint, that he or she ought to change his or her perspective because it’s “closed” and backwards, whereas the more liberal view is, of course, more “open” and enlightened.

There’s a problem with this, though, and it’s simply that liberals don’t seem any more open to conservative ideas than conservative people are to liberal ideas. Have you asked any progressive people lately if they are open to making abortion illegal? Are they open to tax cuts? To cutting state funds for education? To opening up the gun laws? To teaching Creationism in public schools? Or we could even get more personal here: are these people open to offering their sons and daughters up as volunteer soldiers for the wars being fought internationally? If someone were to hypothetically answer “no” to any of these questions, would it make sense to accuse them of being “close-minded”? Of course not. I don’t use any of these examples as if the answer should be yes. I’m simply showing that there’s a values divide, and that issue at stake is not one of how open or closed people’s minds are. When it comes to political (and religious) partisanship, neither side is really all that “open.”

I was making this same argument once with one of my most liberal friends. His response wasn’t to disagree outright; in fact, he conceded that his views are unlikely to change anytime soon, no matter how persuasive someone else’s argument might be. He did, however, offer up a telling counter-claim. Something like, “Well, liberalism is ‘the truth,’ so of course my beliefs aren’t going to change.” To paraphrase, my friend was basically saying “Yeah, I’m close-mined but that’s because all my beliefs are correct.” I recall sensing in myself at least two responses: one, horror at how elitist this sounded, and two, gratitude that he was at least honest and self-aware enough to admit what he really thought rather than try to make it sound politically correct.

I think what I describe above – liberals using the open/closed-minded language as a clever rhetorical device with conservatives – is the main usage of this rhetoric, but there’s at least one more possibility worth mentioning. I suppose to be “open-minded” could also mean exactly what it sounds like: that a person’s views on a particular topic really are open to being changed if confronted with an argument that is more persuasive than one’s own. This probably occurs for almost all of us at some point in our lives, but the problem is, it doesn’t occur enough. Plenty has been written about how most of us don’t change our beliefs even when presented with new facts, and especially when those facts threaten the ideologies in which we’re most invested.

But this brings me to another question: if a person does change his or her views, is that necessarily a virtue? I can imagine all kinds of possibilities for which changing one’s views would be courageous and honest and even heroic, but I can think of just as many possibilities for which changing one’s mind would only be a demonstration of cowardice and conformity and opportunism. When I think of the “open-minded” person who’ quite eager to please – and I’m sure I’ve fit this mold at times in my own life – I think about someone who has little definition or understanding of who her she is, and as a result is doing a lot of grasping. It’s painful to watch. Is this what people have in mind when they suggest that others should be more open-minded? Of course not, because most of us know it’s not all that admirable to change one’s views and hopes and ambitions every time the wind changes directions.

A related language problem is the overuse of “Don’t judge.” If you’ve been alive recently, you’ve probably picked up the view that “judgment equals bad.” If you’re looking for it, you can even find biblical support for that line of thinking: “Judge not, lest ye be judged.” But let’s start again with some definitions before we work our way to the implications. When I think of judgment or the act of judging, my mind goes first to legal contexts. Trials and courtrooms. The judge, as we know, is a person who is trained and paid to decide, after the evidence has been shown and discussed, whether or not someone has violated a law. Few of us would argue that this isn’t an important role to play in society. A judgment doesn’t have to be but is often associated with a guilty verdict., and sometimes the judge even decides what an appropriate punishment is.

Where our qualms with judgment seem to come in are when the role of judge gets applied to personal relationships. The person who, rather than taking care of the plank in his eye, chooses to look outwardly at the behavior of others and criticize almost indiscriminately, even to the point of condemnation. In a religious sense, this might look like deciding what someone’s “salvation” status or lack of it is in the eyes of God. As such, we can see that this is an overstepping, and we are right to be leery of people who go that far, especially when they are doing it to us. But just like with open-mindedness, this judging language can go as far as discouraging people, especially children, from making decisions about what is right or wrong, healthy or unhealthy. As if we can really avoid those judgments in life.

I teach writing to college freshmen. One of the theories I’m developing is that a lot of the problems I see in student essays, though certainly not all of them, is actually a problem way back in the thinking. In fact, too many of my students seem terrified of thinking. Definitely not incapable. Just afraid. But why? Well, for starters, because of the fact-opinion dichotomy that has been pounded into their heads in middle and high school. You see, it’s simple: facts are good, and opinions are bad. Never mind the various rhetorical implications of what, exactly, constitutes a fact (and who gets to decide?!). It seems to me, though, that a claim is in-between what my students think of as a fact and an opinion. As such, my students don’t want to make claims, which is a real problem. To make a claim as a building block for your argument is to make a qualitative judgment, which is exactly what they’re mostly trying to avoid. Stick to the facts. In saying you think you know something, (gasp!) you might be wrong! And you might be opening yourself up for criticism.

Now I’ve spent enough time showing why “don’t judge” and “be open-minded” don’t quite do it for me as the way to truly engage, so let me now be as clear as I can about what I am for. I hope for minds that are –regardless of age or political leanings – alive, that do the hard work, that wrestle, that sift, that engage, that dare to take a risk. Watch how companies or political campaigns communicate, and you’ll see that instead of the messy process of thinking, we’re passing on a penchant for slogan and cliché. We kill discourse rather than deal in the scary realm of complexity.

Another word and concept I don’t want to lose is discernment. None of us have access to complete, objective, or perfect information. So even after our best thinking, we all get to discern, whether we want to or not. Discernment is the difficult act of making decisions as individuals, families, neighborhoods, and society at large. We interpret and then we trust or distrust. While hopefully the arc of our lives shows development and growth, we still draw our lines. We place our faith in something, even if that something is empiricism or beer or President Obama or football. These commitments are our way to say, “This is the best I can do, for now.” Ultimately we land on a kind of exclusion, that is to say a limit, which seems very much the opposite of “openness.”