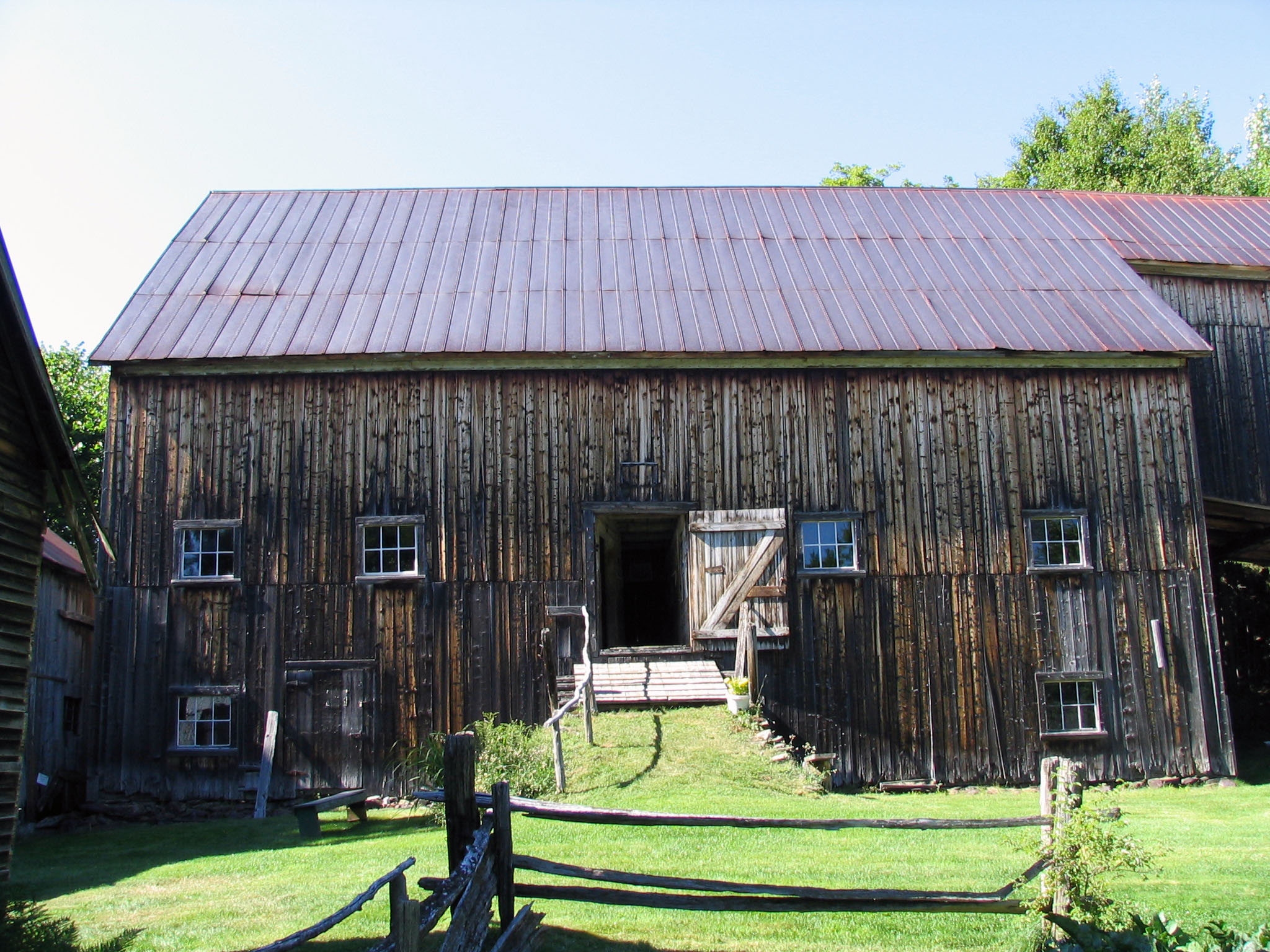 It was hard to resist. John Harrigan’s portrait of Great North Woods stump farmer Jimmie Ricker in our local newspaper compelled me to drive two hundred miles north from Manchester, to Colebrook New Hampshire. Harrigan’s description of Ricker’s farm had been dwelling in my mind for weeks:

Most people knew Jimmie as a farmer, which he was, milking 20 or so in his ancient barn a few steps from his ancient house. A spring fed a pipe that went into a stone tub in his barn to water livestock and cool milk, an unusual thing. “Stump farm” means a farm pretty much unchanged from the time it was settled and cleared, which Jimmie’s farm pretty much was.1

Leaving a long list of chores gleefully behind, Robin and I drive through the luminous grandeur of Franconia Notch on a bright, dry June morning. The notch has always been a gateway to another world for me. But the absence of the Old Man’s wizened gaze reminds us that the world has changed; so we long for a taste of “a dying breed,” of a fading, and soon to be forgotten, way of life.

Lancaster is another gateway of sorts, as north of it the population thins and the evergreens dominate the woods. Just after noon we arrive in Colebrook. A flavor of frugality and ruggedness pervades the place. We grab a simple bite at Howard’s Restaurant and plan our trip to Clarksville, scanning the pages of our topo DeLorme map, keeping a sharp eye out for someone who might have known Jimmie Ricker. I inquire of a man in his late seventies. He has the look of a farmer, a man who has worked the land and knows the people in his town. He has heard of Ricker, but he does not know the exact location of his farm. He recommends the Poore Family Homestead Museum north on Route 145. He expresses perplexity at the changes he notices in the north country. Just as I sit down again, in walks John Harrigan. He graciously signs my copy of his editorial and draws a map to Ricker’s farm on a napkin, rhapsodizing about the glories of every inch of Route 145, narrow shoulders and all. One of a few remaining roads untrammeled by the cold efficiencies of the state engineers: a true adventure. Harrigan himself embodies those qualities he eulogized in Jimmie Ricker. Like Ricker he would, I’m sure, deny it. As a journalist he only stayed away, he said, long enough to “learn my craft.” His outdoor column, “Woods, Water and Wildlife” has run in the New Hampshire Sunday News for 32 years, and he is a frequent commentator on National Public Radio. In addition, his column “North Country Notebook” runs in a dozen weekly newspapers in the northern two-thirds of the state. He was first finalist for the Pulitzer Prize for getting his paper out on the night of the Colebrook shootings in 1997 in which his editor, his long-time companion, and two state police friends were killed. 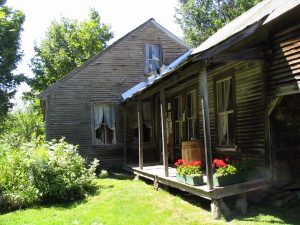 Places like Colebrook and Clarkesville still nurture loyalty. The Great Stone Face flashed through my mind, fallen, but alive in memory’s house. Harrigan noted that

Jimmie Ricker was about the last of the old high-country breed of stump-farmers who eked out a living on marginal hilltop farms whose best crop was rocks. He was also just about the last of a breed of backwoods people who spoke an old and archaic dialect of New England language that was almost Elizabethan in its words and tone.2

We bid our gracious guide good-bye and head north, up onto the high hills, toward the forty-fifth parallel, where the sun glistens with “true northernness.”3 We see the Beaver Brook Falls, cascading with a melodious thunder, moistening the mossy woods below. Shortly up the road is the Poore Farm. We stop and get all we came to see. There the ghost of Jimmie Ricker dwells, too. John Poore knew that his way of life was disappearing, so he made a way for it all to be remembered, as best as artifacts can help us. The unpainted dignity of the old Cape Cod house, hand woven carpets, and lace delicately draped at the windows, bespeak a commitment to land and people. Three generations coaxed a livelihood from the granite saturated soil. The high-drive barn is hewn into the side of the hill. As we walk up the wooden ramp the sunlight illuminates the background of the vertical slats: a cathedral of survival. But that, de-romanticizing the farmers’ work as we must, is not all. I ask our docent if Poore was a reader, as we look at a case full of magazines. “Oh yes,” she declared, “he was a voracious reader. His father was a school teacher.” As Harrigan reminded us these men, Ricker and Poore, were “not ‘just’ anything.” Not only would they give you the shirts off their backs, but they spoke in Shakespearean cadences. That, too, is a rare gift now almost gone. I “shan’t” forget that. This hill farm is all that I have ever loved New Hampshire for. Those who have never known this are the poorer by a great deal. 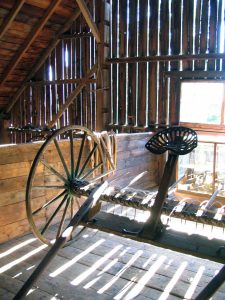 But now what would we find on Clarksville Pond? We followed the ghost of Jimmie Ricker up the road just across from the forty-fifth parallel sign. Two Public Service trucks followed us. Lots of new construction on that road. People coming from away, not for the people of this place, but simply to escape city life. Then at the top of the hill by the rugged, desolate pond in an open field, reminding me of the Yorkshire Moors for remoteness of feeling, was Jimmie Ricker’s farm. The long, low barn was there, but the house looked bright white, perhaps vinyl sided. In the yard was a satellite dish, and a shiny new pickup truck. The land and the location were ancient, but not the house. Its two children tell the story of our times: the dish and the vehicle. These have altered our world more than anyone now knows. Poore and Ricker knew, but we have forgotten. The way we travel and the way we talk changes the way we see the world and the way we live. “It stands to reason.” If you don’t stay put you can’t get to really know people. You can’t know them and learn to love them. If you spread yourself over the thin surfaces of electronic reality your commitments will evaporate. Loyalties die along with the communities they foster.

Somewhat sadly we left, but were cheered deeply by E. Power Biggs’s rendition of Bach’s “Now Thank We All Our God” on the Aeolian-Skinner organ in the Riverside Church in New York City. So electronic technology can be a blessing, too. How strange, as we purr along in our airtight Audi down Route 145 toward home to these sounds, that electricity could give so much, and yet take so much away. But we have one more stop. We find unpaved, slow-paced, South Hill Road and roll slowly along until we come to the “Harrigan” farm with its little invitation: “fresh eggs.” Here, surely, Jimmy Ricker’s spirit lives. We buy a dozen and go on our way. I mutter the sweet cadences of Shakespeare’s Sonnets 18 and 116. The next morning the sharp taste of the eggs reminds me of all we had seen and known the day before. “And every fair from fair sometime declines, By chance or nature’s changing course untrimm’d; But thy eternal summer shall not fade, . . .” The words written, printed for posterity, evoke the things that Poore, Ricker, and Shakespeare knew; the things that remind us, Whose world we live in. These will never fade.