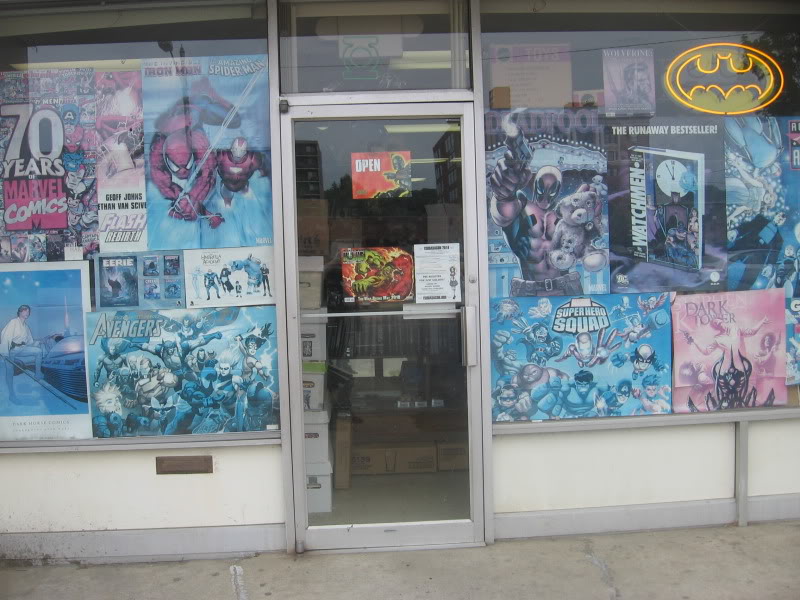 My wife and I spent Memorial Day weekend with my parents. We crammed our three kids into the van and made the four-hour trek to the bottom of our fair state. The new tires made for a smoother-than-usual ride, even if the rapidly thinning brake pads gave us the occasional jolt and the severely cracked windshield obscured the lovely views.

From Marietta on, we followed the banks of the Mighty Ohio down … all the way down, as far as one can go and still be in Ohio. Lawrence, the most southerly county in the Buckeye State, has been my parents place of residence since 1996. It was my home till 2012.

Their step-above-truck-stop bedroom community of Proctorville neighbors the unincorporated Rome. Once the home of the Rome Beauty—a fine variety of apple—the orchards were consigned to the proverbial dustbin of history and replaced with the ugliest of housing developments. They named it Applewood. It wasn’t especially clever or funny.

School consolidation meant the death of Rome Rural High School and Proctorville High School in 1949. Fairland High School was the result. The new mascot—the Dragons—was a surefire winner in the quest to terrify the Soviets at every turn.

It was here, 60 years later, that I met my best friend, the future Dr. Elijah Alderson Wise.

What follows is a memorial of sorts: a long overdue word on someone without whom my life would have been very different.

In the spring of 2006, at the tender age of 16, I had the good fortune to be taken under the wing of a collection of paradoxes known to dead-eyed denizens of Fairland High as “The Lige.”

I was a lonely kid. Elementary years of not knowing how to shut up had earned me a number of paddlings while attending a pan-protestant private school from Kindergarten till Christmas break of grade 6. My parents pulled me out, sensing my impending expulsion, and put me through two and a half years of homeschooling before determining that public school was less likely to kill me than was my poor mother. My restlessness, and the prospect of teaching me high school math, led to her enrolling me in the Dragons’ Class of 2012.

I had acquaintances and even a few friends, but no real sense of belonging. Then along came a mentor and co-conspirator to make something out of a disoriented mess. The Lige took pity on me, frankly. And I do not resent him for it, for I was indeed pitiful.

We immediately started a band (as is natural for Sophomores and Juniors in high school with poetic inclination and the ability to play guitar with some measure of competence).

What followed was a few good years of loitering outside gas stations, nursing Big Gulps and broken hearts. We wolfed down countless bags of Flaming Hot Munchies, watched far too many gangster movies, gigged at a coffee shop and a Relay For Life. On the weekends we skipped out across the river into Huntingon, West-by-God Virginia. We bought comic books from Stoner John at Purple Earth and used CDs from Now Hear This. We made the “pawn shop circuit,” digging discarded gems out from piles of pop culture detritus. If we felt especially bold, we journeyed out to the Milton Flea Market.

We wrote hundreds and hundreds of songs and practiced them relentlessly in living rooms, bedrooms, basements, and boat houses (but, oddly enough, never in any garages). We went to see the Counting Crows (three times?) and lamented that we had “missed out” on our rose-tinted vision of the 1990s.

We were disgruntled philosopher kings, dreaming of a future reviving 90s light-alternative rock to critical acclaim. Some day we would get out. We would be heard. We would be understood. We would be celebrated.

We had firmly bought into the myth that staying put equaled failure.

I took the first ticket out, fleeing to Northeast Ohio. Lige stayed and went to Marshall, and proceeded to kick himself. Let the record show that he had no cause to do so. He was not, nor would he ever be, a failure.

In college we struggled to keep the band together. We stayed in touch and spent as much time as humanly possible together during holiday breaks and summers.

I pursued my inane dreams of music business glory for about a year and a half, before doing what every other clueless, shapeshifting collegian did: switched majors. I gave up on the Music Technology degree and joined the Communications department. With an emphasis in Journalism, I figured I could at least write about music.

Lige stayed the brutal course. He was no coward. In four years, he waylaied an undergraduate degree in psychology and proceeded to burn through a masters and doctorate in double-time with an eye toward becoming a clinical psychologist. He wrote research papers equating superhero preferences with personality types and landed numerous gigs on panels at Comic Con International. I envied him and praised him to any and all who could bear to listen.

Lige called me at work one day in the early months of 2017 to announce that he had bought a ring for his girlfriend. They set a date for the fall and all looked bright.

That summer I’d carry him through the Rome Proctorville Cemetery with friends I hadn’t seen in years.

A freak accident took one of the finest men I’d ever known from me. It was 11 years of his companionship that taught me what a truly sacrificial friendship looked like. Our mutual tomfoolery was my first real taste of community.

That’s what community is after all—people.

Lige was and is still celebrated. Not as a rock star, but as a human being. I think he secretly always preferred that—being known as a friend, a servant, an enthusiast, a clear-eyed and honest examiner of the world, loyal to a fault.

I spent Sunday afternoon with my wife in a combination coffee shop and used book store in Huntington’s West-End antiques district. Sadly, the old man Dixieland combo was not there ragging the classics.

We sat and sipped coffee. I read the introduction of a freshly purchased, gently used copy of The American Porch: An Informal History of an Informal Place. (It promises to be the porchiest book a porcher could want.)

Between paragraphs, I glanced out the window and lamented that I had gained some patriotic feeling for the Tri-State Area too little, too late.

Place was also indispensable to our friendship whether we realized it or not. For all our determination to be malcontents, we did secretly love our home. We cherished our goofy haunts.

But not a day goes by when I do not wish that in returning home for the holidays my visit could still coincide with the return of my dearest friend—that we could pop in at the old places and laugh about the petulant, little Holden Caulfields we had been.

And celebrate that we had somehow managed to grow up.

On Monday, I didn’t go to the cemetery. I couldn’t bear the thought of trying to have a moment of peace and prayer in the midst of crowd.

I would have stumbled through the words from the appropriate litany:

O Lord, give rest to the soul of thy servant, Elijah.
Grant him rest where the just repose
and make his memory to be eternal.

I will remain forever at a loss as to why I was granted 11 great years. And why I couldn’t have had more.