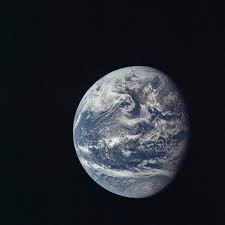 In different ways and in different places, but most concisely in a 2009 American Scholar article, “Putting Man Before Descartes”, historian John Lukacs has made a similar point in putting forth a case for what I often call a “higher geocentrism”. Expressing his worry about the fallout of Descartes’ radical subject-object dualism and our tendency to elevate human-displacing theories and constructs over personal “participation” and human experience, Lukacs comes to the conclusion:

And now a last step: We must recognize, contrary to all accepted ideas, that we and our earth are at the center of our universe. We did not create the universe, but the universe is our invention, and it is, as are all human and mental inventions, time-bound, relative, and potentially fallible.

Lukacs, as I understand him, is arguing for that second, albeit somewhat ‘poetic’, (in the deadly serious meaning of that term), geocentrism.  It’s a geocentrism alluded to in the anecdote about barns and fields. This higher geocentrism is something I first came across 20 years ago in novelist Stephen Vizinczey’s review of Northrop Frye’s The Stubborn Code.  Vizinczey, an atheist, in writing on Frye’s appropriation of William Blake’s prophetic observation about how admiring the sky in terms of scientific, mechanical patterns leads to establishing human life in mechanical patterns too, wrote, “Is is possible that I am not alone in believing that in the dispute between Galileo and the Church, the Church was right and the center of man’s universe is the earth?”

I confess that, at the time I first read that, and even though it’s such a simple observation and struck me as deeply truthful, I felt something like a religious terror at giving an assent to an attack on what, after all, is one of the bedrock stories of modernity: The rise from cretinism and the horrible sin of “anthropocentrism” though the displacement of our home, the earth, by the great, objective, new discovery of the sun’s objective centrality and our new-found puny place in the scale of things.  Since that time, however I have become more than comfortable with Blake, Vizinczey and Lukacs’ hereticalesque insights, insofar as, for many, owning a sense of earth’s centrality gets you labeled a ‘flat-earther’.  Indeed, however,  in an infinite Universe, with ‘equivalent reference frames’, and to summarize all three of them, the center, first and foremost and in a profound sense, is wherever the hell observer is located!

Wait! But Isn’t this view anthropocentric and hence, egotistical? Of course not.  On this front, Luckas’ says:  “This insistence on the centrality and uniqueness of human beings is a statement not of arrogance but of humility. It is yet another recognition of the inevitable limitations of mankind.”

And Patrick Deneen, citing Tocqueville, frames it this way:

The purported aim of lowering human stature is deceptive, inasmuch as its more fundamental motivation lies in displacing the status of the grantor of that special status, namely God. By displacing God, humans — increasingly enhanced in power and control by means of science — can occupy the space once occupied by the divine. Alexis de Tocqueville understood this phenomenon with extraordinary clarity: “I think the doctrines [of materialists] pernicious, and their pride revolts me. By giving man a modest conception of himself, it might seem that this could be useful to him. But they give no reason to suppose that this is so; rather, when they think they have sufficiently established that they are no better than brutes, they seem as proud as if they had proved that they were gods.”

Now much of this may be old hat to readers of this site. Lately, however, what has interested me more than the important insight regarding the primacy of experience over experiment and practical reasoning over theoretical reasoning, (a.k.a. “Putting Man Before Descartes”), is what I might call the “symbolic fallout” of the stance we adopt when we look at the world.  Lukacs is brilliant in showing that although the scientific construct of a presumed strict separation between mind and matter between ourselves and nature may be “methodologically fruitful”, (to use the words of Owen Barfield), it is also “ontologically factitious”, and therefore needs to be seen as a construct which is derivative from and secondary to actual human experience. This is an important point to grasp.   For me, however, it’s Northrop Frye again and historian and social critic Lewis Mumford who get at something deeper and less frequently discussed.   Their analysis of symbolism seems to go strongly in the opposite direction of the presumption that geocentrality is misplaced because it is egotistical.  For these two, the symbolic fallout of what we choose to see as central, (analogous I would say, in some sense, to the choice of Narcissus in choosing to ‘love’ his image/self instead of ‘knowing’ it),  is related to nothing less than whether we are currently involving ourselves in building an ant-heap we all serve as slaves, (a “megamachine” in Mumford’s parlance), or a kingdom of persons.  Are we fashioning  a bee-hive or, to paraphrase Schumacher, a world, “as if people mattered”?

Frye, a literary critic adept at apprehending the power of symbols, says it this way:

If we remove science from its context and make it not a mental construct but an oracle of reality, the logical conclusion is that man ought to adjust himself to that reality on its own terms…what begins as reason ends in the conditioned reflexes of an insect state, where human beings have become cerebral automata.

With this admonition, Frye stands in a long line of modern thinkers, including Rousseau and Blake, who worried that we were forming an insect state or ant-heap. The novelist John Cowper Powys even observed that people were actually starting to look more like insects. Read almost any page of his writing at random, including descriptions of rotting leaves that could go on for a full page or two, and you’d see that he had powers of close observation that stagger the imagination and he was pretty equipped to observe such changes, if indeed they were (are) taking place.

The historian and social critic Ivan Illich railed for years against what, to him, was that idol of the modern age which was most deserving of smashing–the view of the earth from the moon or from outer space: an image so beloved by so many ecologists and scientists.  Though it was often put forth as a symbol of  unity and care of the earth, it was, to him, a symbolic invitation, (hubris disguised as humility), to that scientific, managerial attitude that frightened Tocqueville so much, “as if they had proved that they were gods.”  For many, that same image and managerial vision that so frightened Illich is identified and actually promoted under the term “Second Copernican Revolution”.

There’s definitely a divergence in worldviews here, folks, and, on the verge of the “Second Copernican Revolution”, the opposing worldviews have roughly the same contours as they did at the beginning of the Modern Age when there was to be a choice between a worldview that was a managerial, Copernican and Cartesian construct elevated into an ‘oracle of reality’, (a displacement; seeing the world from a rootless, fleshless distance, as if from a removed Archimedean point), and a worldview that was more, well, “Rabelaisian” and geo-centric, a worldview that was embodied, that took the hurly-burly of life on life’s own terms;  it acknowledged constructs as constructs, and it refused to take Archimedean points as ‘oracles of reality’, a phenomenon later diagnosed as a disease called “ideology”.  According to Powys,  “To the famous Archimedean boast:  ‘Give me whereon to stand and I will move the world.’.  Rabelais answers: ‘I move with my ship; and the waves of the world give way.’”   Modernity, then, in this view, might be seen as the  progressive scientific development of a tractor beam that took more and more people away from their own ships and placed them on Archimedean points removed from the the now-disenchanted earth.

Perhaps the most impressive backdrop—at least in terms of boldness–upon which to locate this trajectory attendant upon modern man’s displacement  from earth-centrality to sun-centrality was the one created by historian Lewis Mumford in his The Pentagon of Power, (1970), the second volume of his two-volume set, The Myth of the Machine, which many consider his most important work. Mumford, no fundamentalist Christian by any means, sets out to characterize the fallout of the ‘Crime of Galileo’ (his phrase) and the very essence of modernity as the “Return of the Sun God”:  “The deity that presided over the new religion and the new mechanical world picture was no less than Atum-Re, the self created Sun.” In other words, in the anecdote referenced above, my priest must somehow surmise that he represents a faith with a worldview quite different from another, resurgent faith, with a different (though adolescent) priesthood, a priesthood of the insect state, a priesthood ‘of Baal’ that often masquerades as the community of scientists, a priesthood that serves the Egyptian, self-created Sun God, Atum-Re.

John Milton, too, especially because he met Galileo, is very interesting on the symbolic fallout of the choice regarding which orb to make primary and the ways it plays out vis-a-vis gender, (below).  But, for now, let’s listen to a little more Mumford on suns:

So much for the long series of technological changes that, beginning perhaps as early as the eleventh century, came to a climax in the ‘Age of Exploration’. But as it happened, the most decisive technical improvements that took place in the sixteenth and seventeenth centuries lay outside the immediate province of technology: for the great event that presided over all other activities and transformed the Western outlook upon life was a religious phenomenon: the return of the Sky Gods and especially of the Sun God…..

By giving the sun a central position, Copernicus was in effect a better Egyptian than Ptolemy”.

Mumford describes one of the foundational myths of modernity not just in terms of an event with religious implications but specifically in terms of a religious regression.   I find this even more interesting considering one can make an association between the first known proponent of of heliocentrism–(not Copernicus, but Aristarchus of Samos, d. 230 BC)–and our friend Archimedes, (d. 212 BC), he of the power to be hoisted upon the earth from rootless, fleshless distances, (someone I might dub the Patron Saint of Displacements), who wrote of Aristarchus’ views on heliocentrism in The Sand Reckoner.

Jason Peters, quoting Owen Barfield, wrote in this place back in 2009 :

“You will sometimes hear people say that they have no metaphysics. Well, they are lying. Their metaphysics are implicit in what they take for granted about the world. Only they prefer to call it ‘common sense.’”  Much of the burden of that little book, and indeed of most of what Barfield wrote, was to point out, and then call into question, what he considered the assumptions of the scientific view—to point out and then call into question, that is to say, its metaphysics, which for him formed the “subliminal boundaries of the contemporary mindscape.”

Mumford was involved in the same enterprise as Barfield, that of calling into question the metaphysics of the scientific view of the world, but he choose to see that ‘contemporary mindscape’ as a full-blown religion.  I think he has a point.   As for me, I prefer the religion of my priest.  He represents a worldview from front porches and not from Archimedean points.  And isn’t the Church itself, after all, a sort of front porch, where the human entertains the divine and the divine entertains the human?