The economic crisis that emerged in late 2008 and the predictable responses it elicited from those in power served to highlight the extent to which concepts such as human scale, the distribution of power, and our responsibility to the future have been eliminated from the public conversation. The response to that crisis only worsened the political and economic centralization and atomization that have accompanied the century-long unholy marriage between consumer capitalism and the modern bureaucratic state. We live in a world characterized by a flattened culture and increasingly meaningless freedoms. Little regard is paid to the necessity for those overlapping local and regional groups, communities, and associations that provide a matrix for human flourishing. We’re in a bad way, and the spokesmen and spokeswomen of both our Left and our Right are, for the most part, seriously misguided in their attempts to provide diagnoses, let alone solutions.

Though there is plenty we disagree about, and each contributor can be expected to stand by the words of only his or her own posts, the folks gathered here more or less agree with the above assertions. We come from different backgrounds, live in different places, and have divergent interests, but we’re convinced that scale, place, self-government, sustainability, limits, and variety are key terms with which any fruitful debate about our mutual future must contend. We invite you to read along, and perhaps join the discussion.

For an introduction to the front porch, read Localism in the Mass Age: A Front Porch Republic Manifesto. While you’re waiting for that book to show up in the mail, check out these articles:

A Republic of Front Porches by Patrick Deneen
What Our Hands Have Wrought by Mark T. Mitchell
Write Home by Bill Kauffman
And Then Begin Again With What Remains: A 10-Year FPR Retrospective by Jason Peters
Free America, The Front Porch Republic, and America’s Decentralist Tradition by Jeffrey Bilbro 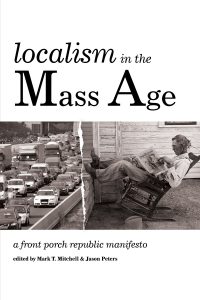 Launched in 2014, Front Porch Republic Books publishes works about place, localism, community, decentralism, and conservation. Titles include significant works on politics, economics, and culture, as well as new editions of previously published works that deserve a new audience. Other titles provide practical advice on how to enact and embody a localist ethic. FPR Books’ managing editor is Jason Peters, and its editorial advisory board includes such prominent public figures as Andrew Bacevich, Rod Dreher, Richard Gamble, and Walter McDougall.

Among FPR Books’ titles are Localism in the Mass Age: A Front Porch Republic Manifesto, edited by Mark T. Mitchell and Jason Peters; Telling the Stories Right: Wendell Berry’s Imagination of Port William, edited by Jack Baker and Jeffrey Bilbro; Poetry Night at the Ballpark, and Other Scenes from an Alternative America, by Bill Kauffman; America Moved: Booth Tarkington’s Memoirs of Time and Place, 1869–1928, edited by Jeremy Beer; and The Demise of Virtue in Virtual America: The Moral Origins of the Great Recession, by David Bosworth. 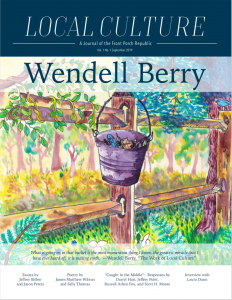 In 2019, we launched a print journal. Local Culture: A Journal of the Front Porch Republic is published semi-annually. It is dedicated to the conditions that best conduce to human flourishing: the virtues, political and economic decentralization, localism, liberty, respect for natural limits, tradition—especially the humane tradition in arts and letters—and living arrangements built to human scale. Please look through the archives and subscribe.

Beginning in 2011, FPR has hosted an annual conference. These convivial gatherings provide opportunities for writers and readers to meet in person. During the day, presenters provide substantive–and humorous–food for thought, and in the evening we convene at a local eatery to continue the conversation and catch up on old friendships. You can see the topics and locations of our past conferences, and please join us at our next gathering!

If you value place, limits, and liberty and want to support our endeavors, we’d be grateful for any donations. Please also share our books, copies of Local Culture, or essays from the website with your friends.