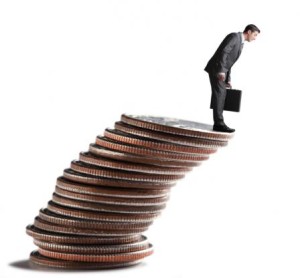 The danger in speaking after thirteen talks on Catholic Thought and Business is that there is nothing left to say. Russ Hittinger started with the observation that his job was to tell you what you already know. I fear my job is to tell you what you have already heard. But I think I can come at it from a slightly different angle.

The title of this talk is “What are our degrees of freedom for living solidarity?” In other words, is this a pipe dream? Is it possible to live up to the demands that the Catholic Church puts on businessmen, to build a business which serves the common good?  I hope you have been encouraged that this is possible, however difficult. In this talk I want to focus on something that may lead us to think that this challenge is utterly unrealistic: we talk about markets, finance, competition, and management in ways that lead us to think that we have no scope for moral behavior in markets. I call this excuse “The Market Made Me Do It.” This way of talking about the challenges of business shapes our sense of our responsibilities in markets, and limits where we can effectively exercise the virtue of solidarity.

We know that as Christians, we have an obligation to work toward a more just society of good work. Solidarity makes this claim on all of us. But where is this solidarity exercised? What is the outlet for this virtue? When we see the world through the lens of subsidiarity, we see ourselves as part of many communities, all connected, each with a common good.  The common good of some communities like the state is supposed to include the common goods of the communities which are embedded in it. A business person has obligations of justice and prerogatives of love in each of the communities in which he lives: in the family, in the local business office, in the corporation, in the local church and other communities, and at the level of the state. Since communities higher up (like the state) are supposed to address tasks and challenges which are beyond the communities further down, the question arises: where should we act on the demands of solidarity? Does it make sense to try to live solidarity in the workplace? Or does solidarity mean state action?

The crucial question for us is “can anything be accomplished for justice and solidarity at the local level, the business, the office, etc.?”  If the answer is no, then we are going to find it impossible to bridge the divide between our lives as Catholics and our lives in business.

Let’s say you own a business, or are responsible for one. You are sometimes, maybe often (probably always) faced with difficult decisions.

– For example, maybe the decision is difficult because it affects your workers. Their pay is low, and you decide you can’t give them a raise this year. Or you must lay off some of them, even though many are vulnerable to job disruption.

– Or maybe your decision is difficult because it involves long-term suppliers, who are your friends, or with whom you at least have built a sense of trust and loyalty.  You must find lower-cost or higher quality suppliers; perhaps your current suppliers will suffer as a result.

– Or, finally, maybe the decision involves costs to your family. Your already long hours don’t seem long enough to get the job done, or you are anticipating more travel time. Your spouse, your children, and others who depend on you outside of the workplace will see less of you.

Let’s focus on decisions which affect workers, because they are most often in the news, and in our consciousness. You have workers, some whom you know, and perhaps all whom you care about. Your business is under pressure, and you cannot pay them as well as you would like to.  Or you must lay off some, and it eats you up, keeping you up at night.

Why exactly do you feel bad about this decision (this is a question only an academic would ask)? There are many answers to this question, and they fall along a spectrum: On one end of the spectrum, you feel bad even though there is nothing, really, you can do about it. On the other extreme, you feel bad because you could do something about it but do not.

The first extreme is: you really have no choice. If you pay your workers more than minimum wage, or employ them full time with benefits, your business will fail. You feel bad for your workers, but you also feel helpless to do anything about it. Your employees losing their jobs, or having crummy pay, is something that happens to them without you really doing it to them. You would feel bad for them if they worked for someone else and lost their jobs. You can comfort yourself with the realization that you are not really responsible; it’s not your fault. You are like a bystander: sympathetic, wondering if there was something you could do, but not really responsible.

On the other end of the spectrum is a situation in which you could without cost pay your workers more or keep them employed. Of course, I’m an economist, and know that there are always costs! When you pay your workers more than minimum wage, or give them more generous benefits, profits will be lower, but let’s say the lower profits do not threaten the business; you are not on the knife edge of failure or survival. In this case, you feel bad because you are in fact doing something morally wrong; you could easily help your workers, avoid laying them off, or increase their compensation, but you don’t, because you don’t have to. Your conscience is bothering you, and it should. Your feelings are a sign that you should treat your workers better.

So which is it?  Are you helpless (in which case you have no moral responsibility) or fully in control (in which case you need to change your behavior)?  Of course, the truth is somewhere in the middle. How close we are to either extreme is very important, however, because it forces us to confront both the culpability of the business owner, and our moral responsibility.

Of course, it is very difficult to discern in any given situation where on the spectrum we are. I think there are three reasons for this difficulty in discernment:

First, we never have the luxury of certainty. We never know exactly what will happen if we pay our workers more; we only know risks and probabilities, and we don’t even know those well. It’s hard to know, and our judgments might be wrong.

Second, we are imperfect and sinful.  We make mistakes, and sometimes let ourselves off of the hook. These decisions involve our own judgments about how much we need to live on, what sort of risks are acceptable to our standards of living and our status, and we are as vulnerable as anyone else to wanting too much. We mistrust ourselves, and our mistrust is, we know, often justified.

Third, everyone around us is telling us that we have no choice but to pay as little as possible for as much work as we can get. This is my biggest concern. I worry that those of us who look at these decisions from a distance (from academia, from government), make it too easy to say that there is no choice in matters like this, that “The Market Made me Do it” is always true.

Both the right and the left sides of the political spectrum encourage the attitude of “The Market Made me Do It,” that there is no choice but to drive costs down as far as possible, no matter the consequences, and that those who treat their workers better will not survive in a dog-eat-dog market.

On the left, the story goes like this: Those who have power (business owners, owners of capital) are as trapped as workers are by competition; the system of competitive capitalism is to blame. I participated in an excellent seminar recently in which most of the seminar members were on the left. One of them used Mitt Romney’s work as an example of this blamelessness. There was no question among the participants that Bain capital’s mission was to cut wages and jobs at US companies, to make them more profitable at the expense of US workers. The question was whether we could really blame him for his actions.  Those who were more generous did not blame him, because to blame him would be to claim that the problem of capitalism was that capitalists were greedy.  According to this story, however, replacing greedy Romney with a virtuous CEO would not help matters, because it wasn’t Romney who laid waste to US workforces, it was the system and its incentives.

It is not just the left that tells us that business owners have no choices with regards to how they treat their workers. The story on the right is actually kind of similar: employers who produce in very competitive markets must pay market wages, which are determined by supply and demand in competitive labor markets. They must also generate rates of return on investment and other inputs, which are also determined by supply and demand forces. After you pay market rates of return to labor, capital, and other investments, there is precious little left over.  If you increase worker pay, you must decrease something else, and there is not a pot of money lying around. The money to pay your workers more must come from some other resource, and the owners of the other resources will take those resources somewhere else if you pay them less.

Both of these extremes, left and right, foster a similar attitude toward the moral responsibility of business owners: it’s not their fault, and remedies for market faults must lie elsewhere. In other words, solidarity is properly exercised outside of markets, not within them. What this means for business owners is different on the left and on the right.  On the left, the moral business owner is obligated, along with everyone else, to work for a different system which gives the worker more power and a greater institutional share of the economic pie, either directly in the workplace via minimum wages, mandated benefits, employment protections, and union power, or via redistribution through a generous welfare state. On the right, owners are equally helpless, but there is less to worry about, since the system—the invisible hand—delivers benefits broadly in ways which cannot be improved upon by intentionally planned alternatives. If there are any problems with the system, though, they should be taken care of at a systemic level—through a safety net, through charity, or greater competition.

In September I gave a speech to a D.C. conference on “Liberty and Solidarity,” co-sponsored by Catholic University’s new business school and the Napa Institute.  Asked to speak to the question “What are Our Degrees of Freedom for Solidarity?” I gave the following speech on the temptation to think that markets leave no room for solidarity.