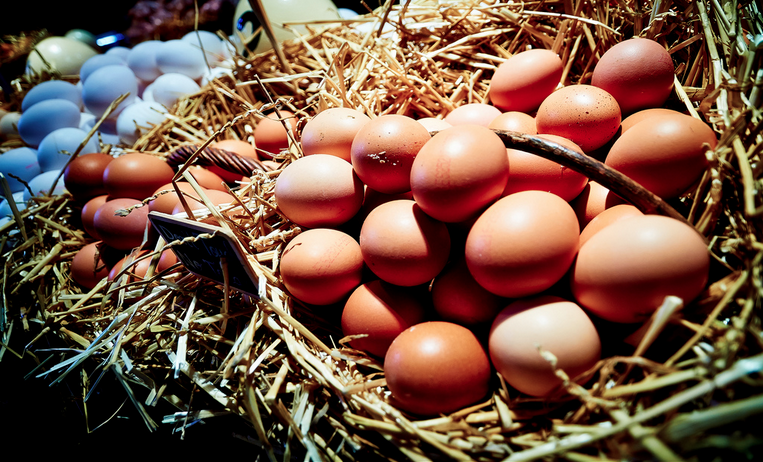 The local library’s inventory reduction sale had progressed over several weeks from a buck a book and a dollar a DVD, to two dollars a flat, and finally to a free for all. There in the dregs was an egg. The PBS emblem was enough to pique my interest, and so not knowing exactly what I would get, I granted the video a reprieve from the dumpster a minute before the clock struck high noon — Saturday’s closing time on the last day of the giveaway. What I got was a free lesson in pedagogical propaganda.

Eggs 101 is “Brought to you by the American Egg Board,” the people behind “The incredible edible egg.” One can almost see the PR whizzes brainstorming back in 2008 about how to counteract PETA’s celebrity laden vegan pitches and the steady advance of the slow food movement with its popular anti-factory farming films like Fast Food Nation. The budget was thin and the chances of the film festival circuit supporting an apologia for battery cages slimmer. Better to set their sights on a captive audience and some overworked gatekeepers perhaps looking for a break.  So, to the classrooms they went.

The Chicago based eggheads who represent the 235 U.S. operations with more than 75,000 hens (65 of those with more than a million birds each) convinced a small public television station just a few hours down the road to rent out its production expertise and lend its legitimizing logo to the effort. In an era of 500+ cable channels, I suppose pledge-week staples like Yanni concerts and New Age sermons from Wayne Dyer only go so far in Fort Wayne.

The screenplay centers on two high school students assigned to make a film about “an industry that has experienced quite a few changes over the years.” It just so happens that one student’s great-great-grandfather was an egg farmer. (Sidenote: agriculture used to be something quite different than industry, so were professions like law and medicine, but the industrial lexicon has now efficiently conquered all.) This schoolwork tie-in explains the scintillating subtitle “A Video Project” and also provides a plot point justification for the low production quality. As movies about making fake movies go, this is not The Blair Witch Project (unless you’re a chicken) but it might fool a few freshmen.

The likable and ethnically diverse duo of Josh and Kenlyn walk us through the labor intensive bad old days of raising hens outside, up to the modern egg factory of today with its cool lasers and robots. Back then (cue newly shot black and white video with flicker effects) hens only laid 150 eggs a year and the mortality rate was 40%.  Today, hens pop out more than 250 eggs annually, and before coming to a pot pie near you at the point of unprofitability, only die at the rate of 5 percent a year. (So you know the livin’ must be good!) All this progress is thanks to the wonders of selective breeding, a scientifically formulated diet, and a healthier indoor lifestyle that was pioneered beginning in the 1920s by prestigious universities like Ohio State and (to my Aggie loving shame) Texas A&M.

A road trip to Purdue University is designed to allay any unspoken uneasiness we might have about the current pinnacle of poultry science. Two esteemed professors remind us that every chicken housing system “has its advantages and disadvantages.” Of course, we only hear about the advantages of the “cage system” including how it allows for timid birds to avoid the perils of the pecking order and limits the diseases brought in from outside sources. (Josh and Kenlyn have fun suiting up in their white “bio-security” suits before going inside the “hen house.”) No talk of bird flu or the selective breeding of antibiotic resistant superbugs here, and not much video of actual birds in their cages either, just a few heads pecking at the automatically filled feeding trough.

Nevertheless, it must be a pretty happy place inside there because, as a professor of “Animal Behavior and Wellbeing” tells us, “One of the most stressful things for a chicken is meeting a chicken it does not know.” Thankfully, that problem is eliminated by the “stable social situation” that tight confinement brings.  Indeed, “that is actually how chickens live in the wild.” You remember those reports from Lewis and Clark about finding prairie chickens in their self-made pens of sticks, don’t you? Sure, I understand that’s not what he meant, but suggesting that a cramped wire bottom cage is actually a small step towards chicken nirvana is almost as absurd.

We never do hear from the Boilermaker profs about what might actually constitute the good life for a chicken. I rather doubt a high rise cage-condo in a building with a quarter million other birds would be at the top of the list. Most, if they had their druthers, would probably prefer the option of flapping their wings, dusting their feathers, building a nest, and seeing the sun.

In the wild, they would also probably eat something other than the feed described in the film as “a mixture of things” (including “vitamins and minerals”!). A very perceptive student might even wonder what was meant by “vegetarian” eggs in the half-hour film’s fleeting 30 second discussion of niche products designed to give consumers a “choice.” “What does that mean all the otherchickens are eating?” she might ask. Of course, the instructor would be unlikely to know, since the included 33 page teachers’ guide is primarily a collection of pre-packaged quizzes.

“True or False: Eggs contain the lowest quality protein of all foods.” Well, as the answer key tells you, that is false and it gives you the teacher a chance to remind the students that eggs have the highest quality protein. “Improvements to hen houses not only increased production but led to healthier birds.” Now, that is clearly true.

Lest you think that there is nothing but busy work here, also included is an extensive “standards-based” lesson plan on, what else, “Applied Economics.” Yes, no child will be left behind as they calculate just how many eggs must be produced to do things like buy a new egg sorting machine, expand the cage system by several thousand birds, or hire a new employee at $22,000 a year plus $2,000 in benefits (that’s a good bit more than the minimum wage that one would probably be paid to remove tons of feces, but this is just a hypothetical you understand). In case you were wondering, though, on that last one it’s 342,857 eggs per year at the then going rate of 7 cents an egg — that’s the annual production of 1294 hens.

The point is to get kids thinking like an egg plant manager. Chickens are essentially just egg laying machines, after all; cogs that work in association with the factory’s other technological marvels like the high speed shell crack-checker, the robo-boxer, and the laser carton etcher. Those each get about as much airtime as the “layers,” or hens to those outside the business. For some reason, there are no shots of other nifty gizmos also essential to the operation, such as the searing hot de-beaker, used preemptively on all the newbies to limit damage from stress induced fights, or the male chick grinder, the fate that meets some 200 million non-layers a year.

Boy, things have sure come a long way from family farmers selling the surplus eggs laid by small flocks of anatomically intact birds that just wandered around the yard. And as the film progresses, Kenlyn and Josh toss out some theories to explain the great changes they’ve seen. This was part of their fake assignment, remember, and they “want to make a good grade,” but nothing seems to elegantly explain it all.

Then, in the closing minute of the film, our faux student filmmakers have an egg-piphany. The scales fall from Josh’s eyes and he exclaims, “The reasons for the changes in the egg industry — you and me!” “What?” a bewildered Kenlyn replies.  “As consumers!” explains Josh. “Consumers want to eat a lot of eggs,” he continues, “but they want to keep the prices low.” Oh, now it all makes sense to both of them, and our young correspondents—getting a bit hungry amid all this talk of high quality protein — fade to the credits recalling the numerous tasty ways to eat an egg, from scrambled to deviled.

And, teachers, don’t forget there’s a recipe in your guide for “Bacon and Egg Breakfast Rolls.” They are an “easy way to treat your students to the wonderful world of eggs,” and, come to think of it, a great segue into studying the pork industry.

Eggs 101 was likely sent out at no charge and unrequested to schools and libraries in agricultural communities throughout America. The level of cheesiness makes me wonder if the National Dairy Council also chipped in on the project, and the cheese factor may have ensured that only the laziest of educators ever bothered to put this into a classroom DVD player. Here at the end of its days, I can only affirm that it was worth every cent I didn’t pay for it. You never know what you’ll get until you crack them open, but some eggs are just rotten.

John Murdock writes from Texas and has pastured eggs in his refrigerator.  You can find him online at johnmurdock.org.