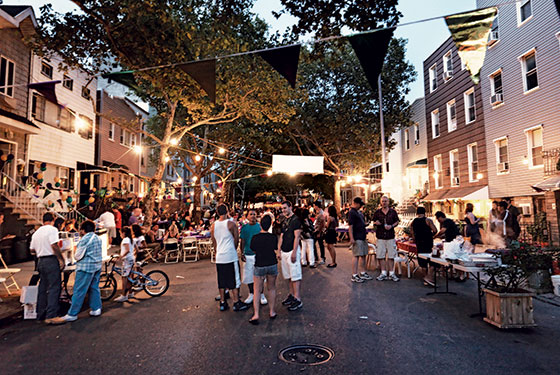 It is a cloudless July day in Connecticut—the kind of day that keeps people rooted in this place despite its long winters and high taxes.  From houses up and down the block neighbors emerge into the sunlight carrying beach chairs and trays of food.  A long row of folding tables borrowed from someone’s employer runs down the center of the road, ready to accept the offerings.  In a nearby driveway hamburgers and hot dogs donated by the woman whose family owns the local meat market cook on side-by-side grills.  Neighborhood kids in packs dart from one lawn to the next trying the yard games that have been set out.  All of this is possible because the police have cordoned off the street, and the faces of the drivers who approach the barriers before rerouting betray a sense of confusion followed in some cases by what appears to be wistfulness.  They have stumbled upon a block party.  Maybe the first one they’ve seen in years.  For the next several hours, the personal relationships essential for community will strengthen among a group of people who in today’s atomized society might otherwise have remained unknown to each other despite sharing a patch of Earth smaller than one of the farmsteads that used to dot the area.

For all its seeming potential, the debut of the block party on the American social scene as recorded in the pages of The New York Times almost exactly a century before this sunny Connecticut day was not a particularly auspicious one.  The United States had entered the First World War in April 1917, and neighborhood celebrations of men headed off to fight the Kaiser began occurring shortly thereafter in New York City.  Despite their patriotic origins, these block parties were soon the source of local controversy.  A September 15, 1918 article bearing the headline “REGULATE BLOCK PARTIES” detailed the efforts of Bronx Borough President Henry Bruckner to establish a five-member committee to oversee the issuance of permits for such events given his concern that these celebrations were “a waste of money – money that could be better diverted to other uses, such as Liberty bonds, War Savings Stamps and other war activities.”  An answering article two days later entitled “DEFENDS BLOCK PARTIES” contained the statement of a Mrs. Kenneth J. Muir, President of the New York League of Women Workers, who insisted that families “should be encouraged to use the city streets for community gatherings and patriotic parties,” with city officials “do[ing] all they can to encourage block parties, rather than to follow a short-sighted policy that may check this fine movement.”  Mr. Bruckner and Mrs. Muir are representative of the ethnic and class divides that fueled this block party debate.  On one side, a former Congressman destined to have his name grace a major freeway in the Bronx.  On the other, the leader of an organization for working class women.  As an issue of The American Architect from the period noted, block parties “started among our alien population resident in East Side congested neighborhoods.”

The arrival of the Armistice appears to have dampened the enthusiasm for block parties, but not the official concern produced by those still taking place.  In June 1923, New York City Commissioner of Public Welfare Bird S. Coler decried block parties as endangering the morals of young women and encouraging gambling and bootlegging.  Once again the proposed solution was a government-run permitting process.  Shortly thereafter, Bishop Thomas Molloy of the Diocese of Brooklyn prohibited Catholic organizations from hosting block parties. These pronouncements came despite the celebrations already being in decline.  An August 4, 1923 article in The New York Times under the heading “WHERE ARE BLOCK PARTIES OF YESTERDAY?” noted that while a year ago “a motorist could scarcely burn up a gill of gasoline without coming to another closed street, with the lights bright behind the barricade, and the girls and boys and oldsters, too, dancing on the asphalt,” now “you may search this town from end to end and find scarcely one.”  In an assessment that sounds all too familiar today, the article blamed the demise of the block party on an itinerant population and the existence of too many distractions.

This obituary turns out to have been premature.  The resurgence of war-time patriotism following Pearl Harbor, the growth of suburbia, the start of the Civil Rights movement and even the Bicentennial all seem to have contributed to a revival of the block party in the following decades. The Chicago Tribune and The Washington Post, for example, ran articles in the 1970s noting a significant increase in block parties in their respective home cities.  Yet if concerns about block parties corrupting the youth of America had died down by this period, other criticisms persisted.  Many focused on the idea that they were a poor substitute for more genuine community building.  Sociologist Amitai Etzioni labelled block parties the one-night-stand of social relationships.  Urban planner Percival Goodman considered them a “cry in vain, a despairing last hope.”

Despite this surprisingly contentious history, the block party continues to enjoy a special place in the American community-building toolkit.  In recent years many municipalities have been actively encouraging these neighborhood celebrations, often with demonstrable success.  (Ironically, the permitting regimes that have their historical origins in suspicion of block parties now allow for interesting data analysis of when and where such parties are occurring).  Still, a 2016 report entitled Building Blocks: How Cities Can Encourage Block Parties by community organizer Adam Greenfield highlights the considerable variation that exists among municipalities when it comes to fostering block parties.  Cities’ policies on everything from fees (from $0 in many places including Chicago and Detroit to over $300 in LA) to permit application length (1 page in many cities, but as high as 22 in Atlanta and 27 in Riverside, CA) to required neighborhood approval (signatures required from 100% of neighborhood residents in cities including Dallas and New Orleans) can either help or hinder efforts to host block parties.  Greenfield concludes his report with a list of best practices and recommendations for cities seeking to promote block party growth.

A similar set of best practices and recommendations for hosts might help to ensure that block parties become more than Etzioni’s one-night stand.  The New York Times’s premature obituary of 1923 may have been wrong in predicting the disappearance of the phenomenon, but its analysis of the potential limitations of the block party rings true:

Most important is the need for something deeper than abstract gregariousness if man is to hang together. The block appeal sought to make a cohesion different from that of a theatre audience, for instance.  Man is selective in his swarming.  He needs a stronger bond than general merriment if he is to keep it up.

For those organizing neighborhood celebrations, then, the challenge is to create opportunities for the general merriment of the block party to develop into the stronger bonds of true community.