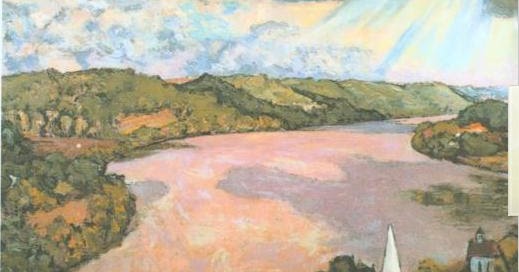 Jackson, MI. In the latest issue of The Baffler, George Scialabba reviews the Library of America’s recent collections of Wendell Berry’s essays. It’s a perceptive and sympathetic review, but Scialabba ultimately parts ways with Berry because he’s frustrated by Berry’s insistence on “Thinking Little.” Such an approach, Scialabba argues, is an inadequate response to the huge, systemic problems of our day. Maybe so, or maybe not. Regardless, Berry is not interested in merely fixing the problems corporate gigantism has wrought: his invitation, his challenge, is both more modest and more radical—to participate in the Creator’s life and love.

Scialabba summarizes Berry’s posture by way of a (too-simple) dichotomy: “Personal responsibility is his watchword, rather than solidarity.” He goes on to quote a long passage from Berry’s essay “Think Little,” and he responds by laying out his disagreements with Berry’s vision:

This is splendid prose. It is disastrous advice. Leave aside the implicit belittling of Social Security, Medicare, Medicaid, unemployment insurance, and other examples of “plan-making” and “law-making” that tens of millions of Americans have felt very grateful for. Look to the present balance of forces: the structures of legislative, electoral, ideological, and financial control in the United States are deeply entrenched, highly resistant to citizen initiative, and virtually without exception geared to the needs of the country’s largest industries and banks. Nothing those plutocrats do not wish to be done will be done in America, even if a hundred million Little Thinkers “go ahead on their own.” Only if that hundred million organize themselves and coordinate their efforts—in other words, become Big Thinkers—is there the slightest hope for wresting control of our country from this corporate/financial oligarchy.

While Scialabba’s line of critique is relatively common, it misses the mark on two levels. The first is that it depends on a false dichotomy between personal and communal action. Even Jedediah Britton-Purdy, who largely shares Scialabba’s perspective and who also wishes that Berry would write more explicitly in favor of “politics and collective action,” acknowledges that Berry’s “local focus is not narrow but expansive.” In other words, thinking little and local action can become the ground for large-scale change. In fact, such an approach may be the only viable ground for lasting, systemic change.

More fundamentally, however, Scialabba doesn’t think Berry’s localism is adequate because he doesn’t share his theological vision. Later in his essay, Scialabba makes their differences clear:

although it lends his writing gravity and grace, I’m sorry that Berry insists on giving the agrarian ethos a religious framework and on situating human flourishing within a “Great Economy,” by which he means not Gaia but the “Kingdom of God.” As a result, he speaks less persuasively than he might to those of us who feel that our civilization has somehow gone wrong, and that at least some part of traditional wisdom is indeed wisdom, but who cannot believe that this universe is the work of the Christian God, or of any God.

Instead of this Christian vision, Scialabba calls for “a pious paganism, a virtuous rationalism.” Berry’s early writing did espouse a kind of pious paganism, but Berry ultimately found that insufficient and returned to his Christian tradition and language. As Scialabba’s largely sympathetic review attests, however, Berry’s theological vision remains winsome, attractive even to those who don’t share it. Throughout his essays, Berry pairs his theological, moral arguments with ecological, pragmatic ones. This approach enables him to build common ground with people like Scialabba who don’t share his belief in God.

Nevertheless, in the final accounting, Berry’s localist vision does depend on his theology. I could point to any number of essays where he acknowledges as much. See, for instance, “Health is Membership,” where he states his credo: “I believe that the world was created and approved by love, that it subsists, coheres, and endures by love, and that, insofar as it is redeemable, it can be redeemed only by love. I believe that divine love, incarnate and indwelling in the world, summons the world always toward wholeness, which ultimately is reconciliation and atonement with God.” But it is in his novels that his theological imagination is most fully realized. Consider, for example, Jayber Crow’s haunting question: “What did love have to say to its own repeated failure to transform the world it might yet redeem?” Jayber’s distinction between transformation and redemption names precisely the gap between Scialabba’s standard and Berry’s. Scialabba insists that our actions are meritorious and good if they are effective, if they transform society and lead to measurable improvements.

Berry, on the other hand, upholds love as its own standard: human lives are good insofar as they participate in divine love’s redemptive work. In describing the effects of his strange “marriage” to Mattie Keith Chatham, Jayber admits that it doesn’t bring many measurable benefits to either Mattie or him, but he still concludes it was good: “What good did I get from it? I got to have love in my heart.” By any quantifiable metric, that seems like a faint consolation for a failure to transform the world, but by the logic of the gospel, participation in love is indeed what ultimately matters. And, as Berry insists time and again, love and affection have economic results. As he puts it in “It All Turns on Affection,” “it is in affection that we find the possibility of a neighborly, kind, and conserving economy.” To relate this to Scialabba’s critique, Social Security without love is inadequate, but love for our elderly neighbors may lead to support for Social Security. Medicaid without love is a soulless bureaucracy, but affection for particular people who lack income or healthcare may lead to Medicaid.

Regardless, such results are never sufficient justification for our actions. That line of thinking would lead to consequentialism, and Berry insists that “hope lives in the means, not the ends.” Berry’s way of love celebrates those actions that allow us to have love in our hearts: the joys of good farming, the pleasures of eating healthy food, the delights of convivial membership. Given his core theological differences, Scialabba seems likely to remain Berry’s respectful ally rather than his comrade. As he concludes, “No amount of recycling, farming right, eating right, being neighborly, or being personally responsible in other ways will matter much if we don’t subsidize solar and wind power, raise mileage requirements, steeply tax carbon, drastically reduce plastic production, kill coal, and provide jobs for all those whom these measures would disemploy.” The key phrase here is “matter much.” Matter according to what standard, transformation or redemption, efficacy or participation in divine love?

When Scialabba writes that “cultivating our own gardens and learning the virtues we have forgotten will not suffice to save the world,” he is right. But the irony is that if his goal is to save the world, his own approach is also doomed to failure. No amount of political organizing will bring about salvation. The good news, of course, is that we don’t have to save the world; the Creator is also the Redeemer, and Berry’s writing constitutes a joyful invitation to participate in His work of love. As I argue at greater length elsewhere, this theological vision is deeply empowering: “If we believe that God is going to save the world, then we have time to salve our neighbors’ wounds.”