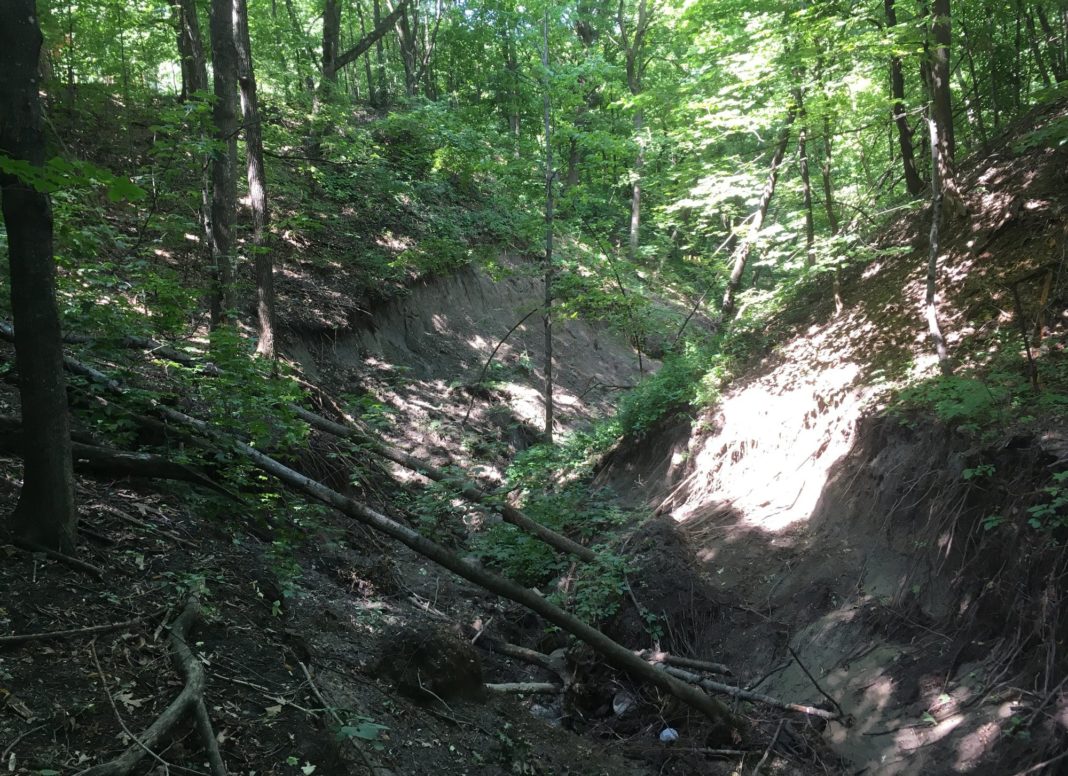 Reeds Spring, MO. Something there is in Midwesterners that doesn’t love a ravine. For much of my life in the rural Midwest, I have lived near one of these gullies, these defiles, these clefts in the earth. I have spent considerable time in ravines, drawn to them by an appetite for domestic exploration: though they worry me, I have also been drawn to them; I traverse the ravines to find the spirit of my place.

For many of my neighbors, though, a ravine is an unplace. Not suitable for hunting, of no value for gardening or backyard sports, ravines fall outside our typical land uses. They slide past our consciousness, occupying the same mental category as a highway median.

What is it about ravines in the Midwest that calls forth such neglect, disregard, even hostility? In other regions, these clefts are cherished as places of beauty: think of the Grand Canyon, or the Finger Lakes. In the Midwest, ravines get no such respect.

Is it a problem of language? In the idiom of my Midwestern heritage, to call a place a ravine marks it as an unusable piece of land—uncomfortable, overgrown, dangerous, disregarded. Yet English has many terms for depressions in the earth, some more lovely than others. Valley is attractive, as are its near-synonyms, vale, dale, glen, cove, and hollow. Our various borrowings from other languages are uniformly lovely: coombe (Welsh), canyon (Spanish), coulee (French), and wadi (Arabic). Even raw terms like gulch, gully, draw and defile have a rude poetry to them. But if I term something a ravine, I grant it no such sense of romance. The semantic echoes of “ravenous,” “raving,” “ravaging,” and “raveling” can’t help.

I have seen this pattern repeat itself across the Midwest, but consider my neighborhood in rural Stone County, Missouri, as an exemplar. My family and I live on a cul de sac with five other houses off a ridge of the Ozark Mountains. Northwest of our house, between our property and the main road, the ground drops precipitously. Cedars, sumac, and black cherries crowd the edge of the forest, while further down, spindly oaks and hickories compete for light over a limestone scree and an undergrowth of poison ivy, Queen Anne’s lace, wild strawberry, and Virginia creeper. Standing on our deck, one can discern the contour of the land by the tops of the trees: a deep gouge, dropping one hundred feet down in an equal amount of lateral space.

I make regular forays into this ravine. Scrambling through the underbrush and skidding down the scree, I have found black cherries, chunks of fossiliferous limestone, pokeberry, flowering dogwoods, sticky orange mushrooms, freshwater springs. I have also found:

Add this, then, to the ravine’s status as unplace: not just that we disregard it, but that we can use it as we like. Too often, ravines in the rural Midwest become nothing more than a handy local dump.

This has been the shadow side to my exploration of ravines. As a boy, I spent hours in the ravine behind my grandparents’ house in small-town Nebraska finding antique glass bottles, old shoes, and other detritus carried through the rainwater drainage pipes the city had redirected there. Once, on the other side of town, I helped my parents haul old tires and broken-down implements out of their barn to toss them into a ravine our neighbor used as a private dump.

Even now, I am guilty of sometimes hurling the stray tomato into the woods after it has fallen in my garden. I don’t compost my tomato detritus, to avoid fostering disease. So I throw the tomato into the ravine. It’s okay, I think. Nobody will notice it there.

We have a gloss on the Midwestern ambivalence about ravines in Ray Bradbury’s autobiographical novel of small-town Illinois, Dandelion Wine. In Bradbury’s lyrical invocation of summer in the small-town Midwest, the ravine sits at the center of town; nonetheless, it represents “the very end of civilization” to Douglas Spaulding, the twelve-year-old protagonist. When a series of assaults on women terrorizes the town, the ravine becomes the site of real danger. Even before that threat arises, however, Douglas views the ravine as a pit hosting “all the things he would never know or understand; all the things without names [that] lived in the huddled tree shadow, in the odor of decay.”

If Bradbury reflects our Midwestern disregard for ravines, he equally speaks to the ravine’s power to spark the imagination. In his introduction, Bradbury states with relief that on a visit to his hometown, “the ravine is deeper, darker, and more mysterious than ever.” We might even say the ravine made Bradbury a writer, provoking his appetite for horror and adventure.

For me, the ravine presents a similar opportunity to awake the imagination. For domestic exploration, nothing could be better than an unplace. When I descend into the ravine, nobody troubles or even notices me—I can examine a straggly hickory, sniff a budding sassafras, or stalk a pileated woodpecker as long as I like.

Taking all this into consideration, I prefer that the ravine remain “ravine.” The word has grown on me, marking not an unplace but a place where I awake to the ravening we still bring to the earth. A hidden place. A place of fear and discomfort, sometimes, yes, but also a place where one might stumble over a fallen log to find, sudden beneath one’s foot, a wild strawberry in bloom.

The This-ness of This Place: Introducing Belle Point Press and Mid/South...