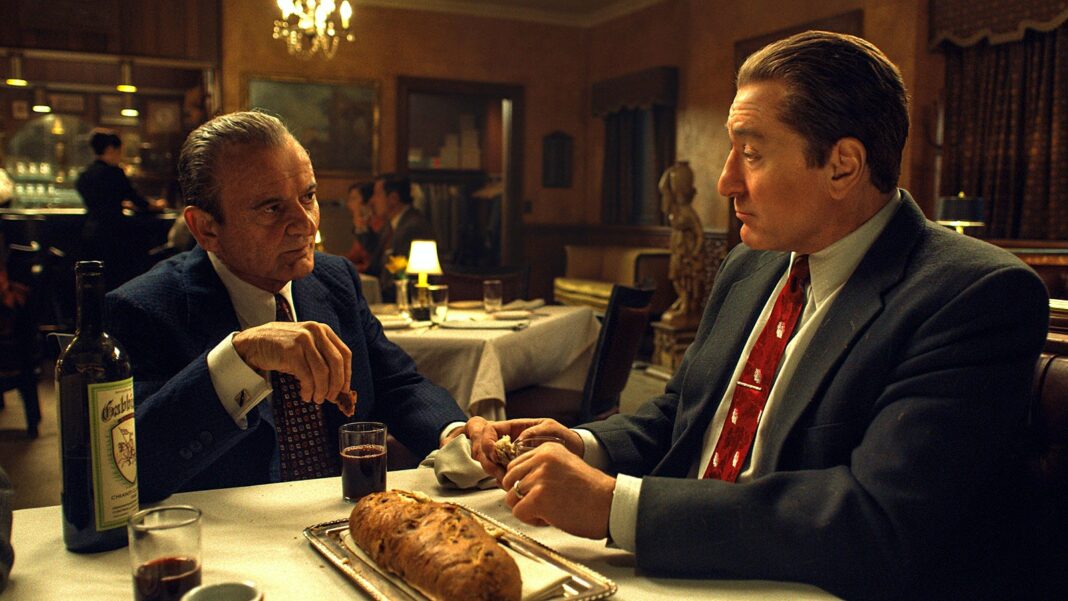 Livingston, MT. One of the most prolific and gifted of the now aging New Hollywood generation of American filmmakers and actors, director Martin Scorsese has entered the autumn of his life and career, leaving a mixed but ultimately brilliant legacy. 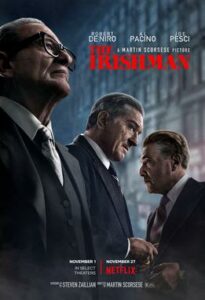 While having written and directed a host of variant genres of film, with movies such as Taxi Driver (1976), Raging Bull (1980), and Goodfellas (1990), Scorsese is best known for his rough-edged depiction of Italian-American life during the pinnacle and later collapse of what the late theologian and journalist Michael Novak called “ethnic Catholic” communities, which saturated cities and towns throughout the Eastern seaboard and the industrial Midwest.

In his most recent work, The Irishman, produced by the now very controversial Netflix (the film is available in Blu-ray for those who don’t wish to patronize the questionable streaming company with a subscription—for the record, your humble author watched it via another’s subscription!), Scorsese blends together his fascination with mid-twentieth century American Catholic urban life as well as profound questions of sin and redemption.

Over the course of nearly three and a half rich and ruminative hours, Scorsese directs the story of former truck driver turned mob connected union official Frank Sheeran (brilliantly played by Robert De Niro) and his alleged murder of Union boss Jimmy Hoffa (skillfully but not perfectly played by Al Pacino). Drawing from former prosecutor Charles Brandt’s 2004 book, I Heard You Paint Houses, which contains Frank “the Irishman” Sheeran’s alleged confessions of murdering Hoffa, Scorsese molds a story not only the rise and fall of a powerful union leader and alleged mobster, but the rise and eventual disintegration of a uniquely twentieth century American way of life.

Like the character Henry Hill in Scorsese’s 1990 classic Goodfellas, De Niro’s Sheeran undergoes a Bildungsroman, rags to riches story as a young man who sets out to make a fortune and ends up getting over his head. Like many of Scorsese’s films, The Irishman models the structure of a Greek tragedy in which the hero’s desire to do good—in Frank Sheeran’s case, to “protect his family”—is ultimately the cause of his downfall. There is an especially disturbing, especially Scorsese-esque scene in which Frank brutally assaults a grocer who had shoved Peggy, one of his daughters. This brutal scene creates a violent fracture in the Sheeran family that only widens as Frank goes deeper and deeper into the Bufalino crime family, becoming the monster he wanted to protect his family from.

What is especially curious and what makes The Irishman a marked departure from Scorsese’s other films is the seemingly sincere repentance that Sheeran undergoes at the end of the film, confessing to a priest. This apparent redemption of Frank Sheeran, however, is undertaken in a fairly drab and morose setting. Frank is confined to a wheelchair in a nursing home staffed by friendly but seemingly disconnected millennials. At one point, Frank attempts to show a nurse a picture of his daughter Peggy with Jimmy Hoffa. She is completely oblivious to the identity of Hoffa, one of the most important American figures of the latter half of the twentieth century.

On one level, this generational and cultural fracture between those born in the twentieth and twenty-first century leaves the film with a gloomy sense of an ending. It is suggested that the world of the Kennedys and Nixon, of Jimmy Hoffa and the Teamsters, and of the rise of so many Catholic immigrants to the peak of financial success, is now largely gone.

It is this loss of culture and community that is the second layer of the plot of The Irishman, for it was precisely in “making it” and becoming part of the suburban culture of the twentieth century America that Italians, Irish, Poles, and the oft-forgotten midwestern German Catholics lost something of themselves and their culture.

This decline manifests itself in the film in both subtle and profound ways. As each decade in The Irishman progresses, the principal characters begin to dress down—there is a humorous scene in which the old fashioned and conservative Jimmy Hoffa and Anthony “Tony Pro” Provenzano get into a fight in Florida after Tony arrives to the meeting late dressed in shorts.

More than the decline in dress, however, is the decline in community and culture. As in other generational crime family films, the quality of food in The Irishman declines from eating homemade meals and well-crafted dishes at ethnic restaurants, to eating the mass-produced packaged food that became the uniform and staple American cuisine in the twentieth century. By the end of the film, Joe Pesci’s character, the notorious mobster Russell Bufalino, asks Frank Sheeran if he wants Total or Cornflakes for breakfast.

The family of Frank Sheeran, like that of the Corleone family in The Godfather, also disintegrates. However, this disintegration is not solely due the criminality of Sheeran; it is also due the disintegration of the American family as well as the ethnic neighborhood and the attendant small businesses, churches, and schools that allowed for a dim but nonetheless viable reproduction of the village life of the old country.

Indeed, the only constant communal presence in The Irishman is the Church. Priests baptize the children of Frank Sheeran, and a priest counsels and absolves Sheeran as he nears death. The Church provides a sacramental and moral framework as well as an ultimate sense of hope in The Irishman, and it is this sense of hope that is so desperately needed as we enter into the brave new world of the Biden-Harris era.

In our current political and cultural milieu, there is tremendous fear and apprehension. Nonetheless, our current climate allows for tremendous potential for rebirth of America as well as the wider Western world. If we are indeed to rebuild, then we must look to community, faith, and family as the building blocks of the twenty-first century. We might also learn from the faults and failures of the twentieth, encapsulated so brilliantly in Martin Scorsese’s The Irishman.

Freedom Is Not The Good