Front Porch Republic
Home Articles Culture, High & Low The Low Standards of Norman Rockwell’s Critics
Facebook
Twitter
Email
Print
All too many people are entirely settled in their opinion that Norman Rockwell’s art presents a “falsification” of reality: in short, he is charged with utopianism. This opinion is false, but nearly universal. Now, as it happens, the most common complaint about distributism too is its supposed utopianism. Also, I think, false. Rockwell’s art is supposed to be utopian because it depicts events that are free from suffering, death or evil — a whitewashed world that never was and never could be. Distributism is supposed to be utopian because it requires people to be free from avarice, or else it requires the oversight of a powerful centralized state, the existence of which it rejects. Or something like that. Anyway, it’s not possible, and its advocates, especially Chesterton, are completely ignorant of the Science of Economics.

I’m on something of a mission to rescue Rockwell from the critics. As always, you can find many critics who simply hate his “falsifications.” Nowadays, you can also find quite a few critics who admit to liking Rockwell. These critics find his “falsifications” praiseworthy in one way or another. But they fully accept the “falsification” business. I loathe the charge — I loathe it when it’s made against Rockwell, and I loathe it when it’s made against Chesterton. I think it is cheap and facile and unreflective. And I am hoping to find something of a sympathetic ear here, among those who see the falseness of the charge when leveled against distributism. In this little article, however, I will not attack the falsification charge directly. Rather, I will take an instructive recent sample of Rockwell criticism and show how thoughtless it really is, all the way down.

You might think art criticism is a funny place to start a crusade. Art critics are famous for making wild interpretive moves that strike the average reader as, to say the least, disconnected from reality. In many cases, these flights of critical fancy are, just in virtue of their wildness, more or less set free from refutation. It’s not like you can prove they’re wrong. For example, in his the Rape of the Masters, Roger Kimball savages some art critics: he might succeed in making their claims look silly and unwarranted, but I wouldn’t say he proves them false. (This is not a criticism of Kimball: he wasn’t trying to prove that the claims are false.)

Occasionally, however, critical claims are easy to falsify. Norman Rockwell’s critics, for example, have always said simply unsupportable things about him. (I address some of that in various places, such as here, here and here.) Unsurprisingly, they are still at it. The bizarre, indefensible claims about Rockwell’s work continue unabated. The most recent offender is the Tampa Bay Times‘s Lennie Bennett. In a review of the traveling Rockwell exhibition on display in Tampa, Bennett writes about Rockwell’s 1960’s civil rights pictures, such as “The Problem We All Live With,” and contrasts them with his earlier, happier, Saturday Evening Post pictures.

The problem critics allege in his newly expressed social conscience is that his works aren’t as good as those about the good old days. We know as we look at his earlier works that we’re looking at a world that was mostly fiction. But how much truth is there in a 17th century Rococo painting by Fragonard of always young and gorgeous aristocrats either? We know that Rockwell was a commercial artist who painted for paid commissions. Do we think that Renaissance artists painted for free or always chose their subject matter?

The difference is that Rockwell never seems to stretch himself the way a great artist does. He avoids nuance and the complexities of relationships. The inner life holds no interest for him.

Some of this is simply opinion, and I have no particular objection to it. In fact, I agree that most of Rockwell’s civil rights pictures aren’t all that great. (Although I recently stumbled upon a very nice blog post about “The Problem” that does a beautiful job of trying to explain the picture from a technical standpoint. It made me like the picture a little bit more.) It’s the last sentence that is completely, wildly, indefensible. The inner life holds no interest for Rockwell? Where could that possibly come from? More on that in a moment.

The second-to-last sentence is also indefensible, despite the fact that (I would guess) it probably strikes most readers as true — even as obviously true. It probably strikes most readers as obviously true because it’s the kind of thing that is said so often about Rockwell. But the fact that it’s often said doesn’t make it true. To know whether it’s true, you’d have to do something — you’d have to look at a whole bunch of Rockwells, carefully. You might also need to say a bit about what ‘nuance’ and ‘complexity’ actually mean. When you say he avoids nuance, do you really mean he avoids ugliness? If so, you may be mostly correct. But if you mean the pictures are hamhanded or just simpleminded, then you’re completely off base. 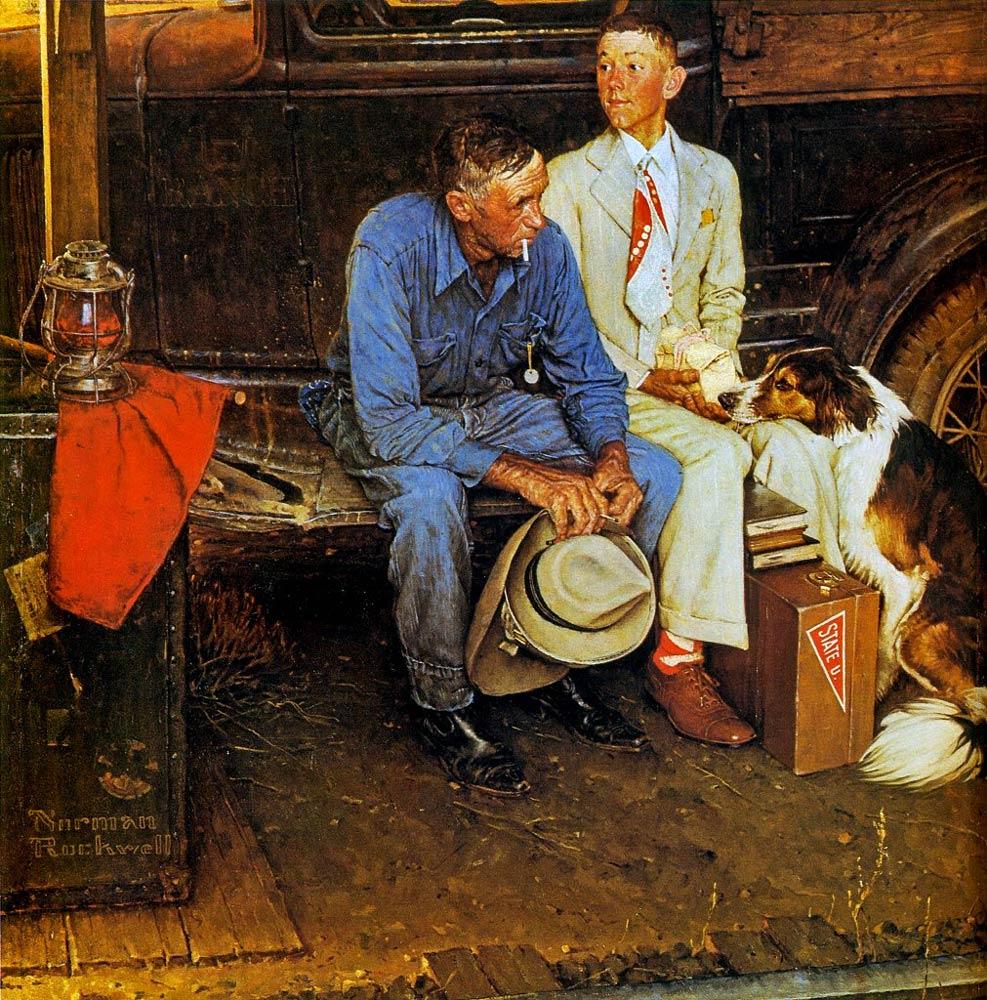 This picture, “Breaking Home Ties,” doesn’t depict nuance or complexity in the sense of ugliness — this relationship isn’t “complex” in the sense that the pair obviously loathe each other and can’t wait to part. If that’s the kind of nuance you want, you’re largely going to have to look outside of Rockwell. But the picture is, for all that, tremendously insightful. The father, holding his son’s hat, has been working and praying for years that his children will have a better life than he’s had.  And now the son is off to college — success! But of course, it means his son will be leaving him behind. And the son is eager to go. It’s such a bittersweet picture, stunningly executed. The fact that it’s a common scene — one that many of us have lived through on at least one side, if not both — takes nothing away from its depth. Indeed, it’s Rockwell’s genius that he sees the depth in these ordinary scenes, and helps us to see it, too. So I think we can safely dismiss the tired, silly idea that there’s no nuance or complexity in Rockwell.

But let’s go back to the final sentence in that quotation from Bennett.  She wrote that “the inner life holds no interest for him.” This is so plainly false that it’s hard to see where it could even come from. Look again at “Breaking Home Ties”: what is that picture about, if not the inner lives of its characters? Or consider an image that is, possibly, even better known, “Girl at Mirror.” 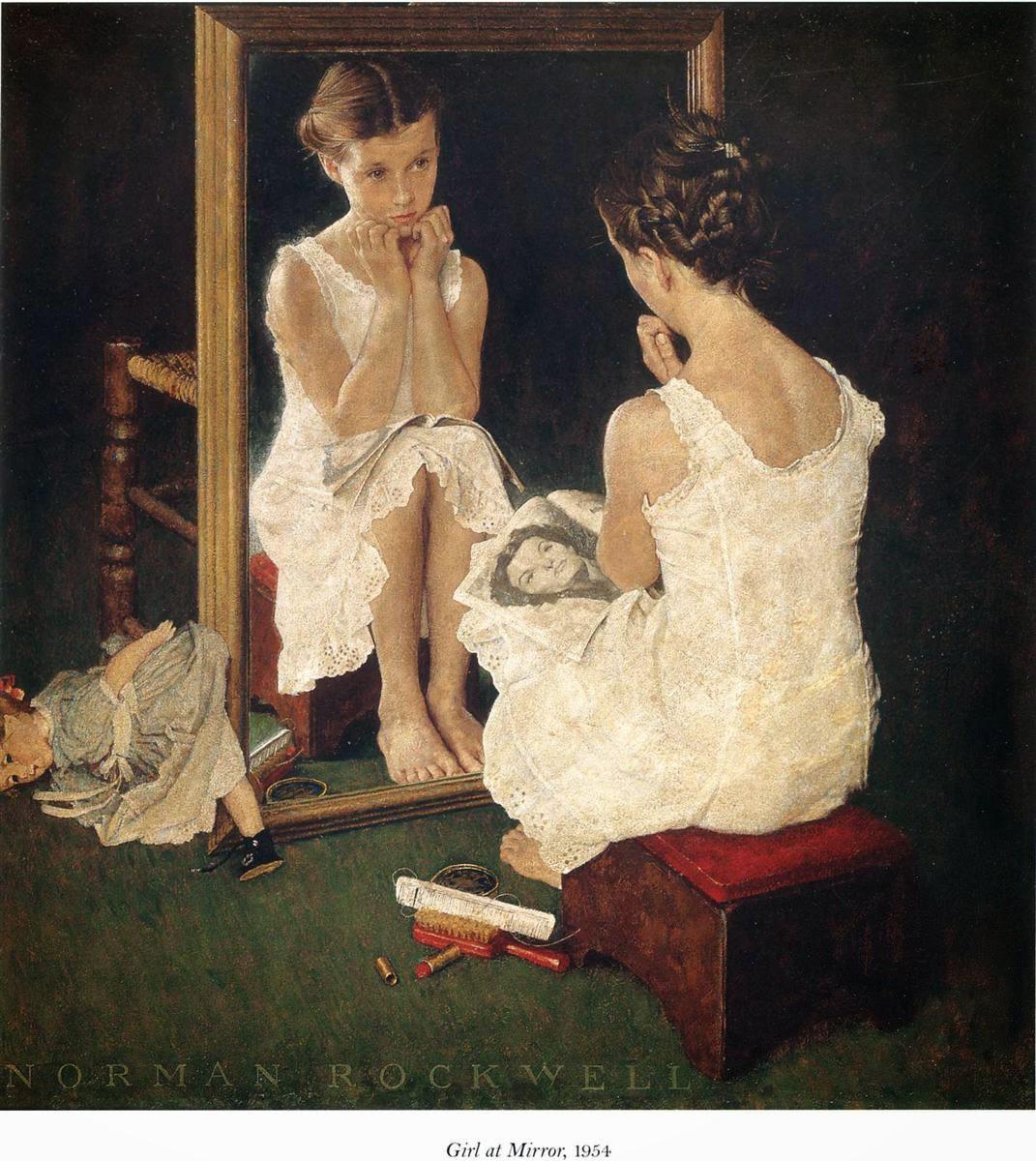 Bennett is far from alone in taking the snidely superior attitude towards Rockwell that her piece displays. He’s a fine painter, many critics will grant, just as long as you remember to keep him in his proper place. Like, you know, he’s not up there with Fragonard. (What a person to pick as a comparison! But I will resist the urge to psychologize.) Here is how Bennett begins her piece:

I weighed in on the trajectory of his career after seeing an exhibition of his work at the Orlando Museum of Art in 2008. I realized two things then that I still believe: An appreciation of Rockwell’s native talent is only possible after viewing his original paintings, which were not seen by the public for years, and that appreciation has its limits.

The bits I quoted earlier, about the lack of interest in the inner life and so on, those are the parts where Bennett lays out her case for his limits. So the argument of Bennett’s review is straightforward: Rockwell’s pretty good, but he’s not a Real Artist like Fragonard, because he had no interest in complexity, nuance, or the inner life. But that’s just false. Bennett’s put-down of Rockwell is typical: it is based on her own fantasies about the work, rather than the work itself.

You might think I’m being a bit harsh. But this is not Bennett’s first attempt to write about Rockwell. Just above, you see that she mentions a 2008 piece. But more recently, she wrote a generally fawning review of Deborah Solomon’s ridiculous biography of Rockwell, which began with the claim that Solomon’s is the first “comprehensive” biography of Rockwell. False. Laura Claridge had it beat by more than a decade. Bennett also spoke of a “new connection” that Solomon had made — linking one of Rockwell’s apparently playful Post covers to Mary Rockwell’s alleged abortion. Solomon did indeed speak of this. So did Claridge, from whom Solomon swiped the idea and the story without attribution.

Now, I don’t expect a small city’s arts beat writer like Bennett to know anything much about Rockwell. She wrote a review of Solomon’s book, and mainly took the book at face value. No problem there: initially, the mistakes in Bennett’s review were attributable to her trust in Solomon, rather than to any bad will on Bennett’s own part. But I wrote to Bennett and, when I got no response from her, to Bennett’s editor to point out the errors. No corrections were made. (I later wrote about this in a little piece at the Huffington Post.) Even the changing of a few demonstrably false words in a book review is apparently a bit too much to ask in the world of our art critics. (The review hasn’t been changed, but it has been reprinted. Journalistic integrity at its best!)

That is the standard to which our Rockwell critics hold themselves.  And apparently, employers like the Tampa Bay Times are satisfied with it.

But the larger point here is the point with which I began — the falsification charge. If you were looking carefully, you saw it in a snippet I quoted before: she said “We know as we look at his earlier works that we’re looking at a world that was mostly fiction.” As I said, this charge is made by virtually every critic of Rockwell I have ever encountered, and in fact Rockwell himself sometimes comes dangerously close to expressing it. If the standards of our art critics are as low as I’ve hinted in this piece, that ought to suggest to you that perhaps even the falsification charge is … false. (Hint: it is.) Rockwell is not a falsifier — he’s an optimist in Chesterton’s sense, and as such there’s a lot more to him than our critics have ever bothered to see.