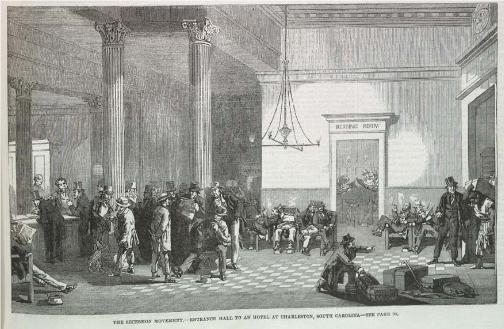 Mt. Pleasant, SC–As little as I wished to make my first post for FPR an overtly political essay on contemporary affairs–I had meant to rumination growing up in a small village attendant upon farmlands in upstate New York–I was compelled by the events of the last few weeks to say a few words on the new phenomenon of serious discussion of secession. And secession is, anyway, a core principle of decentralism and self-determination, having to do with the distribution of power, approximate self-government, and the proper scale of human endeavors that I would take to be inherent in the Front Porch Republic.

It is heartening that at last, thanks to a few off-the-cuff remarks by Texas governor Rick Perry on “tea-party” day, people are starting to talk about secession in these not-very-United States, and for the most part taking the concept seriously. (“Secession Talk,” as the New York Times put it, “Stirs Furor.”) It’s the first time it has been a genuine subject in American public discourse, says Emory University secession scholar Donald Livingston, since the war of Southern Independence was settled in 1865.

So it’s no surprise that a lot of people have completely misunderstood it, and that the nerve in their knees often impels them to declare it illegal and unconstitutional. Robert Schlesinger, a columnist for U.S. News, is typical: under a headline “Texas Can’t Secede,” he wrote that “one third of the voters think the state has the legal right to secede from the Union.” Then, so sure of his errant position he could get cutsey, he added, “Ummm, no,” and went on to scold them for being so ignorant.

But the plain truth is that Texas has that right, and so do the other 49 states.

In fact, there has never been a real question about the legitimacy of secession. It was the principle that led the 13 colonies to fight to get out from under the British crown in the war of 1776. It was the principle implicit in the 13 states ratifying the Constitution in 1789, made explicit in the ratifying documents of New York, Virginia, and Rhode Island. It was the option understood to be available to all states from that time until 1861, and considered by New England states at the Hartford Convention of 1814. No one put forth a compelling argument that secession was unconstitutional, and the fact that the US Congress in 1861 debated and failed to pass a law against it proves that it was not illegal even in that year.

Lincoln put forth various, and often greatly varying, arguments against secession, but, as Livingston says, relying on their refutation by pro-Unionist philosopher Christopher Wellman (A Theory of Secession, 2005), “Lincoln’s arguments are preposterous.” He was not relying on reason and history and philosophical argument, no more than his party did, but on instinct and temperament, with pride and egotism (“Not on my watch”) mixed in.

(In fact, so far as reason has to do with it, Lincoln had previously argued that “any people anywhere… have the right to rise up and shake off the existing government and to form one that suits them better,” and in his First Inaugural held that “if a majority deprives a minority of a clearly written constitutional right,” that would justify revolution.)

Of course it is true that the particular secession of 1861-65 did not succeed–but that didn’t make it illegal or even unwise. It made it a failure, that’s all. The victory by a superior military might is not the same thing as the creation of a superior constitutional right. In fact it dealt only with the question of whether secession would work that one time, decisively decided in the negative by an autocratic, unconstitutional usurpation of power and the waging of a deadly war that defied all civilized standards of warfare to date.

Amid all the talk today, it will be necessary for those who know history and the Constitution to refute those who throw up the rhetoric of “illegal” and “unconstitutional” and the like so that we can get on to an examination of its particular merits.

For example, that New York Times story on “Secessionist Talk” declared that there has been “no serious argument since the Civil War [sic]on behalf of a legal basis for a state’s secession.” Completely wrong. In 1998 David Gordon brought together ten eminent scholars to offer as serious, not to mention academic, a set of arguments for secession (Secession, State,and Liberty) as there could be. Some of the contributors to that volume, notably Livingston, Clyde Wilson, and Thomas di Lorenzo, have subsequently written any number of articles laying out the legitimacy and legality of secession from the Union. The Wellman book also is an extremely careful setting out of not only legal bases but moral and political supports for that action.

I’m not saying that secession is necessarily the immediate answer to the roiling problems of this country for everyone everywhere. But it is something that should rightly be considered, thoughtfully and thoroughly, by many of the states and regions that see themselves as illegitimately being pushed around and dictated to and mishandled by a central government that has, over the last few decades, proven itself to be undemocratic, unresponsive, corrupt, inept, and unduly intrusive, at times unlawful and unconstitutional, and essentially unable to govern at the geographic and populational scale to which we have grown.

Looked at it that way, it’s about the only thing that makes sense.