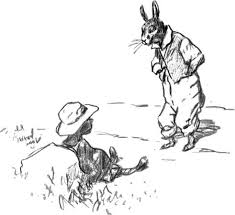 New Castle, Kentucky. We can’t talk about the economy all the time, or anyway I can’t.  Today instead I want to sing a song of the literature of place–and my refrain is, “Bred and born in a briar-patch.”

For someone who believes in autonomous families, local self-governance and a diversity of creatures, I admit I spend a lot of time mentally listing the books I would pester, exhort and even force everyone else to read if I only had the bully pulpit to do so.  (I’m the eldest of several, and one never really recovers from that.)  I’m interested in the canon of what we read and memorize because a good book can give us not only better understanding of our world and ourselves, but a lens through which to focus our understanding.  We all need a cultural shorthand, and I for one would like to use it and be understood.  Without it, so much of what we say is either bogged down in explanations or incomprehensible.

You say everybody knows about Uncle Remus and Brer Rabbit, and of course you, culturally well-rounded as you are, know The Wonderful Story of the Tar Baby.  But do you know it well enough to tell it?  Can you tell me the tale of Mr. Terrapin Shows His Strength, or Mr. Man Has Some Meat, or The Moon in the Mill-Pond (my favorite)?  Do your students, or your grandchildren, or that nice young couple next-door know even the Tar Baby story?  Ask them, and you may find they don’t.

I think for many of us Uncle Remus has become like the wallpaper; always in the background but never examined. For others some controversial aspects of these stories have meant their erasure, in a painfully misguided attempt to protect black children from a trove of their own African-American culture.  But I treasure these stories, and I am awfully tired of drawing illustrative examples from television.  Sitcoms and reality shows make for a very weak cultural glue, and the idiot box has only created a nation of idiots.  So please, let me bully you today about Brer Rabbit.

Of all the folk and fairy tales I know, the Uncle Remus stories are rivaled only by the Brothers Grimm as a powerful and memorable expression of a people’s mind and spirit.  For localists, they make an unblinking case for living in real community, assuming as they do that in hard times we need our neighbors in order to survive, and must make the best of even those who are regularly plotting to eat us.  These are not what you’d call Sunday School tales, though they have the starkness of much of the Old Testament.  They acknowledge the endemic violence of this world in a way that should cure any listener of sentimentality.  They assume poverty is our common lot—which as a historical norm it is, though we’ve forgotten—and they are full of humor (frequently cruel humor) in the face of want and trouble.  They are not always predictable, and often fantastic and amoral, yet they all resolve in ways that seem right because they feel culturally and humanly true.  There is something both stirring and instructive about them

These stories are so powerful, I believe, because they express the collective experience of many authors and editors under the stress of slavery, and so capture the essence of human nature and the human condition with the heightened understanding that comes to people in difficulty.  And like the Grimm stories, these tales are not only for children and originally weren’t even principally intended for children.  They are the stories adults loved to tell each other, back when many of us were illiterate, and had much more of a culture.

Most of what we know as the Uncle Remus tales began as trickster stories in west Africa.  They were then transformed through retellings in the American South during its slave period, influenced by American Indian and European stories, and collected by a white man during Reconstruction.  The versions Joel Chandler Harris started publishing in 1879 were stories he had heard as a young man in central Georgia, but they were known all over the South.  A version of the Tar Baby story which appeared in the magazine Lippincott’s in 1877 showed Harris that material he himself valued might have a wider white audience.  So it was that these black African tales became black American stories, and then Southern stories for both races, and then nationally and internationally popular.

The character of Uncle Remus (whom Mark Twain preferred to the tales themselves) is not himself part of the stories, except in the vital role of teller and commentator.  He is a creation of Harris’s frame story; an old family servant and former slave who tells the Brer Rabbit tales to the little son of the family.  The child’s mother is a Southerner, the father a former Union soldier, and Uncle Remus, though a strong and even imperious character, is loyal to his white family and has a strong tie to this child.  It is a frame Harris expressly constructed to help his white audience heal the wounds of war and Reconstruction.  As such it now angers some readers, and most modern versions leave it out and let Brer Rabbit take center stage alone.  Also, because the dialect is thick, it has been softened in the more recent retellings (such as Julius Lester’s and the Jump! series), and Uncle Remus’s occasional use of the word “nigger” has been left out as offensive.  For children these changes make sense.

But adults should read Harris’s original, to hear the stories as he heard them.  He took his work as transmitter as seriously as any ethnographer.  It is especially sad that the dialect he worked so hard to reproduce accurately is now blasted as demeaning, when to Harris’s mind it was integral to the stories themselves.  He felt the tales would be diminished by being translated out of their vernacular—and so with no training but a good ear, he recreated several black dialects of the mid-century in a way scholars today judge to be accurate.  This dialect is presented without irony or mockery.  The stories are told as a black man might have spoken them, not in blackface.  And though modern scholars wonder how much of the telling is Harris’s work and how much belongs to his black sources, Harris himself always maintained that he gave the tales to his readers “uncooked,” as he put it, and in the early books at least he included only stories he had heard an African-American tell.

Alice Walker has accused Harris of “stealing” her literature from the black culture that created it.  It is true that he profited from it, when no black man or woman could, but it is hard to see her point, given the respect with which he treated his material.  Certainly Harris carefully preserved the Brer Rabbit stories (and others) in a form that would have been otherwise lost.  By 1900 or 1920, flexible as these tales had already proved themselves to be in changing conditions, they would have become something else again, and perhaps less than what they are, and certainly fewer than they are.

There isn’t much in the way of “world literature,” a term that generally makes as little sense as “global village.”  But if there is a world lit. the best folk tales are it, because while they express the historical circumstances of a specific people, they are so fundamental in their concerns that they resonate profoundly with anyone still human.  They have been around so long, and been so often retold, that they are worn perfect and smooth.  I think even if I were a Laplander I would love the Uncle Remus stories.  But believing as I do that Harris was right, and that these tales cannot be uprooted from their original language without losing some salt, I love them as part of the essential literature of this place I belong to, a place that in spite of Eisenhower’s interstates and the Department of Education and television, is still the South.