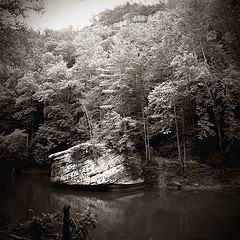 Louisville, Ky. “Rural dwellers may have boundless tolerance for exaltations of the wonders and mysteries of the natural world, but the urban spirit begins to rebel. By the time this well-intentioned but miscalculated show drew to a close, I was more than ready to hop on an environment-trashing jet plane and return to the soulless city, having acquired a pronounced and irrational antipathy to fertile farmland seen on misty mornings and dew-dappled fiddlehead ferns.”

So ran a recent New York Times dismissal of the new show Wild Blessings, a compilation of Wendell Berry’s poems that debuted last month at Actors Theatre of Louisville.  The show was part of ATL’s annual Humana Festival of New American Plays, and was created by the theater’s artistic director Marc Masterson and his company dramaturg, Adrien-Alice Hansel.  Wild Blessings combines five actors, music, and in the background a shifting photographic montage (those fiddleheads).

Why does a belittling review matter? Every artist gets bad reviews.  But I want to look at this one for two reasons.  First, because this review dismisses not just the play itself, but the author of the poems that make up the play, and even the rather large subject of his work.  Nature!  There’s just so much of it. As the reviewer left town he couldn’t shake the dust off his carbon footprints fast enough.

No doubt every crisis quickly instills crisis fatigue in some of us, and clearly this writer has heard one too many pieces of green advice.  But I was reminded of the suggestion a vehement libertarian gave at a meeting years ago, that we should regard the Great Hole carved out by the Colorado not as a national park, but as a convenient national dump.  Such a sweeping rejection of the beauty of the natural world is always worth remarking—in any case, I find it remarkable.

Also, as sorry as I am to acknowledge it, the review matters because this is the Times, and the Times, as has been true for decades, has a clout all out of proportion to the actual taste of its reviewers.

This piece is typical of the paper’s lack of real interest in Mr. Berry.  Perhaps no serious writer draws larger crowds at readings and gets shorter shrift in the Book Review.  He has his fans at the paper (notably, Michael Pollan), and he is not completely ignored, but he is ignored enough.  Jayber Crow, a beautiful novel, garnered about a hundred words when it was published in 2000.  And while every organ makes mistakes and misses important books, the fact is the Times has never found Berry’s work congenial.  Of the over 30 books Mr. Berry has published since 1990, only two collections of essays and the recent novel Andy Catlett were reviewed at respectable length (to be fair, positively).  Now try counting the Times’ articles on Philip Roth.

Two recent Sunday Book Reviews included novels on the following subjects (and the descriptive language is the paper’s):  urban portraits of status-conscious women.  The story of a World War II veteran who takes pinup photos of his downstairs neighbor—love and fame ensue.  Short stories on class conflict entitled Everything Ravaged, Everything Burned. And a first novel of urban Bohemian Oberlin graduates, which ends with 9/11.  Not having read any of these books, I can’t say I know that they are bad.  I can only say they sound like many, many other new novels, and like the usual choices of editors who would indeed find, as one Times reviewer did, that the world described in Mr. Berry’s novels is “sepia-toned.”  To the Times the most foreign of foreign countries is a coherent rural America.  Unless someone is bludgeoned or abused here, or is making really good capriole, rural America bores the Times to death.

As for the play, and as is evident from its title, there is indeed some earnestness to it—an earnestness so grating to the sophisticated ear.  But surely all real emotion is emotion in earnest, and what would poetry be without it?  Wild Blessings is well constructed and at times moving, because beneath it all lies Mr. Berry’s beautiful bones.  Berry is not an obscure poet; the romantic love of “The Blue Robe” or the bawdy joy of “The Mad Farmer Revolution” are crystal clear, and one of the strengths of this compilation is that it shows the many sides of this often grave writer, including his humor and his affection.  If this critic disliked the performers and photo montage, restrained as they were, he need only have shut his eyes and listened.  But his dismissal was complete:  dulcimer, fern, field and poem.  If the poetry alone had no beauty for him, well, there’s no use trying to sell Gabrielli to the tone-deaf.

I lived in New York City for four years, and while I never liked living there, I like New Yorkers.  I even like their parochialism.  I think everyone should feel that his neighborhood is the finest place in the world, even when it’s part of a sprawling megalopolis of concrete and eight millions.  The problem is not that the city and the paper are biased towards their own people and their own concerns.  The problem is that both assume their biases should be everyone’s biases, and that both exert too much cultural influence on the rest of the country.  Literarily as well as theatrically, the Times speaks for the nation–not alone, but very loudly.  So to be dismissed by a Times critic, even a critic whose one book is a biography of a pornographic film star, matters far more than it should.

At a recent conference held in honor of the late Wallace Stegner, a colleague revealed how grieved Stegner was to have been ignored by the New York Times.  Over two thousand miles away in California, successful and loved as he had been, it had stung—as it will continue to sting every writer who does not fall within the scope of a paper whose influence is wide, but whose worldview stops dead at the Hudson.

As for Mr. Berry, full of “hope but not necessarily optimism,” I expect he’s all right.

To be sane in a mad time

is bad for the brain, worse

for the heart. The world

is a holy vision, had we clarity

to see it—a clarity that men

depend on men to make.