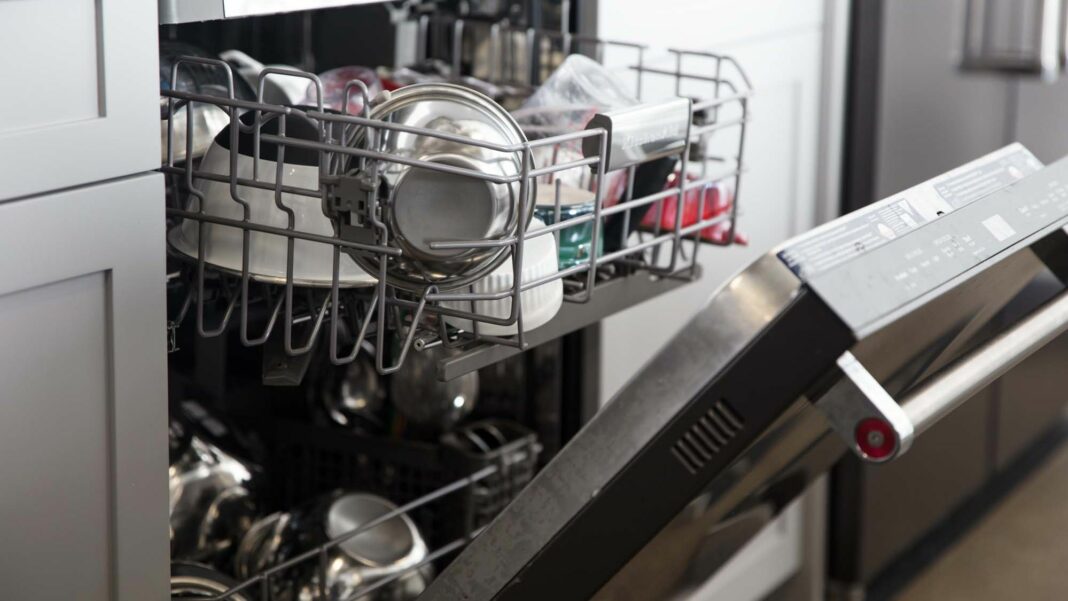 Mt. Airy, Philadelphia. About a week ago our dishwasher started to issue a loud grinding sound from its hidden depths. After a few days I decided to call an appliance guy, and yesterday he came to have a look. Verdict: Replace the motor for $500+, or for about the same price get a new dishwasher.

(Incidentally, the repairman recommended a place to buy a new one, primarily on the grounds that “It’s a local business.” I took this as confirmation that those who really have to deal extensively with businesses whose responsibility matters to them can see quite clearly that local is better.)

This dishwasher is about ten years old. It must have been put in at about the time of a well-conceived kitchen renovation that turned a cramped kitchen and a cramped breakfast room into a roomy family eat-in kitchen with lots of natural light. Before moving into this Philadelphia house, we lived for ten years as a married couple (and then family of three) in an apartment with no dishwasher. In a life that has become busier as we’ve had a second child and now have two full-time jobs, it has seemed like a helpful bit of machinery to have handy.

Now an obvious oddity of this scenario is that it’s cheaper to buy something new than to fix something old; but that’s a commonplace these days. We also (by choice) obtained cell phones when we moved here. When the battery in mine became incapable of maintaining a charge after three years, I went to get a new battery, and found out that my phone replacement plan had me scheduled for an “upgrade” at a deep discount. My three-year-old model had become obsolete, and so had its battery. It was about the same price (and faster and easier) to get a new phone with a new battery than to get a replacement battery for my old phone. Cell phone technology “advances” a lot faster than dishwasher, but the same principle is at work: slight performance advantages via more complicated technology that generates incompatibility and obsolescence and waste.

The real question for us (since repairing it really doesn’t make sense) is whether we ought to replace the old machine or not. From a monetary point of view, not replacing it has obvious advantages. From the point of view of convenience, I can’t say I’ve yet missed the dishwasher. It doesn’t take so much longer to hand wash than to load. Besides, it occasionally happens that neither of us remembers to turn the machine on before we go to bed, whereas you can’t fail to notice whether you’ve washed up by hand or not.

The usual pro-dishwasher argument is that it uses less water. I’m not sure this is true if one is a frugal water-user. Certainly the machine uses non-renewable electricity and my hands do not.

But I think the stronger considerations are the household ones. Should we have machines doing work we can do for ourselves with not much more time and effort? My older son is ready to have more household responsibilities. Why not make dishwashing a collaborative family effort, letting us share in responsibility for the immediate consequences of our eating? This is one of those changes in habit that leads to greater awareness of and responsibility for the texture of one’s life more generally, as well as a sense that such responsibility is familial. Then we could also put the money we don’t spend toward buying something like a piano, that would be a delight to all for years to come.

Yesterday evening, when I told her the results of the repairman’s visit, my wife immediately assumed we would replace the defunct machine, and I did not pursue the question then. She grew up in a suburban home partly designed by her electrician father with all the modern conveniences. (My favorite feature is the 1970’s futuristic vacuum system, with apertures in the walls that activate the central suction apparatus when you snap the vacuum hose onto them.) On the other hand, she has just been re-reading Berry’s essay on computer non-ownership, which she considered recommending to a student assigned to write a “position paper” on computer use. I picked it up from beside her on the table this morning, and she asked me if I was looking for ammunition to make a case against replacing the dishwasher – which means that the thought had already been forming in her mind too.

So it looks like the old machine will stay and become just part of the decor. Or perhaps of the cabinetry: we’ve been needing more storage space for pots and pans anyway.

(Side note on tradesmen: My limited experience suggests that plumbers are better conversationalists than men who fix appliances. Might this have something to do with the fact that the latter are concerned with the gizmos of convenience, whereas plumbers are occupied with the more fundamentally human concerns of cleanliness and the outflow of bodily and household wastes? I suspect plumbers have something of a Rabelaisian comic perspective on the human condition and household life.)

The Banks we Deserve, the Economy we can Sustain