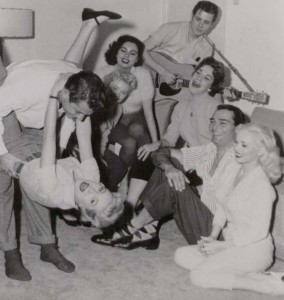 Wichita, KS. I’m more than capable of putting on my localist and communitarian hat(s) during the fall, winter, and spring: I defend the public schools, speak out in favor of walking, urge everyone to buy local and eat right, and generally envision–and do my own little part to encourage–an environment where people can collectively take responsibility for their lives and those of their families and communities. Summer though…in the summer it gets harder. Doesn’t everyone just kind of want to run wild, be irresponsible, be an individual, during the lazy, hot months of June, July, and August (give or take a couple of weeks either way at both ends of the season)? I know I do, and probably you do to. More importantly, with the school year ending in just a few more days, I can see my daughters–especially the oldest one–feeling the same way. Sure, she’ll have church and friends and her job volunteering at the local library, but will it be enough? When the unstructured summer comes upon us, will anything ever be enough? I’m not sure; even when we outgrow those questions, the restlessness is often still with us. It’s weird, how we’ve all internalized this love-hate, always-at-loose-ends relationship with summer, somehow.

I’m gonna raise a fuss, I’m gonna raise a holler
About a workin’ all summer just to try to earn a dollar
Every time I call my baby, and try to get a date
My boss says, “No dice son, you gotta work late”
Sometimes I wonder what I’m a gonna do
But there ain’t no cure for the summertime blues

Maybe we can blame Eddie Cochran (see video).  Or actually, we can’t; we’d have to blame the world he was part of, and the world he helped make. Ray Edward Cochran was born in Albert Lea, Minnesota, in 1938, then (and still) a small agricultural and manufacturing city near the Minnesota-Iowa state line. He grew up in a nation that went to war, and which, in going to war, changed the way jobs and industry and farming were distrubuted about the country (or at least began changes that would procede apace for decades to come). Cochran’s family started out in Oklahoma before moving to Minnesota, and from Minnesota they went to California–the Los Angeles area to be exact, where Eddie (who had learned to play the guitar and drums while growing up, and had imitated the country and folk songs he heard on the radio) found himself, in the 1950s, a young man in possession of a fine talent: the ability to make songs that this new breed of consumer, the “teenager,” loved to listen to.

And teenagers wanted music. They were living in the cities and suburbs of a postwar nation, and that meant that while they went to schools which had been built around the agrarian schedules of mostly rural world, they didn’t have any fields to go out to work in and keep themselves busy during the summer months, and so they found themselves jobs in the new service economy. These jobs took them away from the authority figures of their parents, but gave them other authority figures, doing work that few of them felt any kind of connection to, work that had no meaning except for the wages they were paid. (Karl Marx had some things to say about this, but few American teenagers were reading him during their summer breaks in 1958.) Of course, being adolesents who were no longer children and not quite yet adults, they wanted to associate with one another, but no longer living in tightly ordered communities (though, to their credit, some areas did their best to recreate them as suburban and neighborhood enclaves throughout the country), they mostly had to find their own ways of doing so. That meant making the money to pay for the date that, too often, they had to plan for themselves. And if the boss’s work schedule interfered with those plans…well, there wasn’t much you could do about that, was there?

Well my mom and pop told me, “Son you gotta make some money,
If you want to use the car to go ridin’ next Sunday”
Well I didn’t go to work, told the boss I was sick
“Well you can’t use the car ’cause you didn’t work a lick”
Sometimes I wonder what I’m a gonna do
But there ain’t no cure for the summertime blues

You’d think the parents would be sympathetic to this plight which their children, the children born during and immediately after the war, found themselves in, and many were. But many others had come back from the way having been taught, above all, the value of being a foot soldier in an organization, and as the new service economy and the other concurrent develops of the infrastructure of postwar urban life gave rise to ever more complex needs, profitable industries–in advertising, banking, insurance, law, education, and more–followed in their wake. Not that any of these jobs were new, any more than living in the city was something new (if anything, American had crossed over that particular socio-economic Rubicon by the end of the 19th century); it’s just that, living in the new-fangled suburbs, dealing with these socially needy and economically empowered (though never really empowered enough, if you know what I mean) teen-agers, figuring out rules–often arbitrary ones, because of course the family had, in pursuit of economic opportunity, moved away from the communities where their grandparents and ancestors had lived, perhaps married into families and traditions much different from their own, with the result that much of the authority of age and permanence was lost on the new generation–was the important responsibility of the parents. Clamp down on disobedience, teach them respect, take away privileges as necessary, and (silently) wait for school to begin again, so they have something to do with their time…unlike these long, difficult summer days.

I’m gonna take two weeks, gonna have a fine vacation
I’m gonna take my problem to the United Nations
Well I called my congressman and he said Quote:
“I’d like to help you son but you’re too young to vote”
Sometimes I wonder what I’m a gonna do
But there ain’t no cure for the summertime blues

Well, somehow the country survived that first onslaught of teen-agers, and they grew up to be our parents (or, depending on the age of the readers of this post, they grew up to be us–or maybe grew up to be our grandparents). In retrospect, they turned out fine; better, I would argue in fact, than most of the Baby Boomers who came after them (no offense meant to any Boomers out there). For one thing, the lessons of their parents and grandparents were still mostly acceptable to them: sure, their folks and their teachers were squares, out working for the man, not understanding the whole complex modern phenomenology of girls and cars and parties and summer jobs, but still, there wasn’t anything in principle wrong with the parents and pastors and cops and other authority figures that attempted–sometimes wisely, sometimes foolishly, but generally still attempted–to connect young people with their nation’s more settled pre-war past. Yes, of course, you had radical movements, you had Allen Ginsburg and the Beats and Jack Kerouac (though Kerouac was never himself radical, being a rather conservative Catholic instead), you had Norman Mailer and his “White Negro” paen to the hipsters, but really–none of that stuff translated into a counter-cultural agenda in the late 1950s and early 1960s. That came later. (The earliest anti-war protesters remembered to wear their ties when they went to burn their draft cards.) So our parents–or mine, anyway, born in 1941 and 1944, respectively–listened to Eddie and Elvis and Frankie Avalon (all just a few years older than them) at the parties they went to, and they drove their cars fast, but they also went off to work and to college and got married and had kids and worked within the system, eventually managing to convince the Nixon adminstration to give 18-year-olds the vote, among other things. Not a bad legacy, I think. And today I look at my oldest daughter, looking forward to her thirteenth birthday later this summer, and I see boys at church starting to flirt with her (thankfully unsuccessfully, so far), and watch her rush through books and then look out the window, feeling bored, perhaps wondering when she’ll be able to drive, and I kind of wish I had a family farm readily available, someplace I could send her off to for some work over the summer. Anything to keep her, as best as I can, away from the blues.