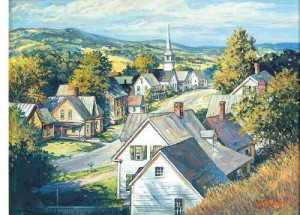 Cold Spring, NY. Leopold Kohr, the author of the great classic, The Breakdown of  Nations, once said that his approach to the world–in favor of smaller nations, smaller institutions, smaller associations–was due to his having been born in a small village, Obendorf, just outside of Salzburg,  Austria. When your childhood is spent within limits, he used to say, where you get to know a good number of people well and also a lot of people no closer than to say “hello” to, you have some approximate experience of how humans lived for many eons before anyone ever thought of cities.

There is much murkiness here, but the general anthropological opinion is that the original African Homo sapiens settlements consisted of bands of between 25 and 50 people, within tribes that might have been between 500 and 1,000, and this is how we lived for at least 250,000 years.  It is, as they now say, encoded in our genes.  “the social organization based on the hunter-gatherer ways of life,” as the eminent microbiologist Rene Dubos has said, “lasted so long–several hundred thousand years–that it has certainly left an indelible stamp on human behavior…. The genetic determinants of behavior, and especially of social relationships, have thus evolved in small groups during several thousand generations.”

And so it is that I was born in a village in upstate New York and spent most of my first twenty years there, and that has made an imprint on me–on my philosophy, social attitudes, certainly on my politics–that has lasted powerfully for the rest of my life–even though I spent thirty years of it in its antitheses, Manhattan.  I don’t know what the population of Cayuga Heights–overlooking Cayuga Lake, as you might expect–was in the 1940s, but I seem to remember it as being something just over a thousand.

The local elementary school was small and the classes no bigger than twenty, if  memory serves.  I can remember when it was proposed that the school shrink from eight grades to six, with students to be bussed down to a junior high school grades seven to nine, and I can remember facing what I thought was a large crowd in the school basement when I was one of two students allowed to speak up against the change.  I lost then, and not for the last time in a worthy cause, but something in my genes flatly resisted the idea of leaving a human-scale school for the vagaries of education down in the city of Ithaca.  All right, not a big city–I guess about 20,000 then–but it seemed bug enough to me.

Not only was the community small but it had something it called the Community Corners as its economic hub, and that was no more than a grocery store, dry cleaners, book store, and maybe a small variety store.  I worked in the grocery in the summers for three years, and my impression is that the Corners functioned less as an economic  hub–it couldn’t have been doing that much business, and larger, fancier stores were available a few miles away in downtown Ithaca–than a social one. People would gather and talk  in knots, in the parking lots, on the sidewalk, at the meat counter in the back, and so many people used to come through the checkout line at my cash register on Sundays with only one or two items that I used to wonder whether they had come out of necessity or just to see other people after church.

The fact that my end of Cayuga Heights blended in with some farms as it went northward, not all of them working but still with open fields where birds sang and fireflies danced in droves, also had some effect on me growing up.  I used to skate and play hockey on the pond at one place where the old farmer never even seemed to venture outside in the winter, and I would ride my bike down dirt roads that seemed to lead nowhere past farmhouses and barns that varied from spanking neat to decrepit.  Somehow I had the sense that I was connected to people who knew the land, knew how to grow things (besides a Victory Garden like my father had), had some solidity and longevity in place (unlike my family, new to the village).

So I want to argue that in some sense it was inevitable that when I began to formulate a politics, it had to be in opposition to the big, the oppressive, the autocratic, the expansive, the all-embracing, in favor of the communitarian, the local, the democratic, the human scale.  I guess it was as a first taste of this that I led a demonstration of some 3,000 students at Cornell University in 1958 against an authoritarian university that declared it was acting in loco parentis (when one of the reasons people liked college is that they escaped their parents), decided to forbid “petting and intercourse” by undergraduates, and diminished student self-government.  And not long after that I was led to Murray Bookchin and his arguments for anarcho-communalism, which were in some ways (though I didn’t think of it at the time) a kind of working-out on a grander scale the experience I had had subliminally as a kind growing up in Cayuga Heights.

After that, a career writing about decentralism, participatory democracy, human scale, small-is-beautiful, the corruption of centralized American government, the evils of discovery and conquest, the tyranny of the Industrial Revolution, and now most recently secession and self-determination may be no more than something based on “the genetic determinants of behavior” growing up village.