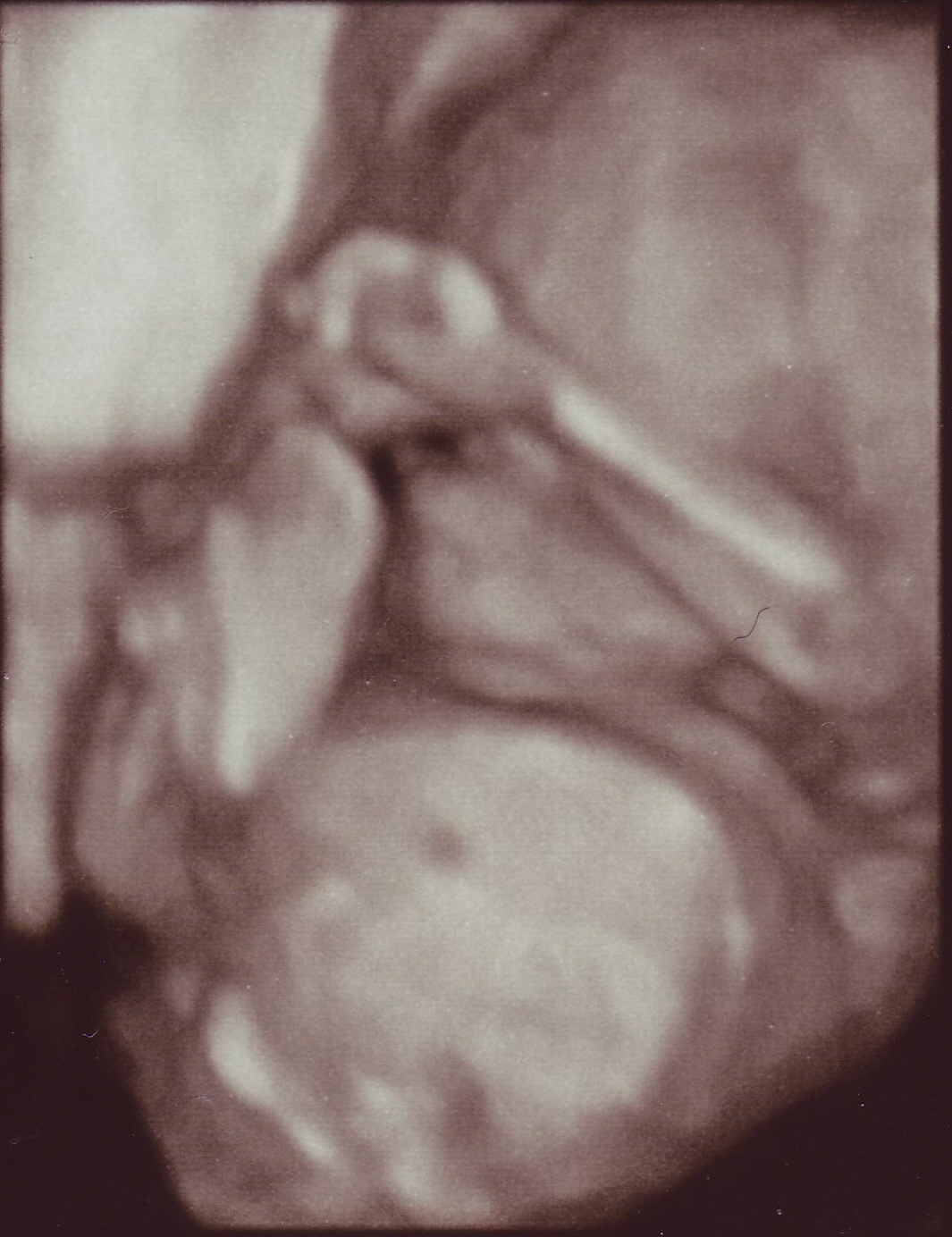 Devon, PA.  This is my son.  As you see him here, he has been alive for just about one-hundred-forty days and has, this and other ultrasound images suggest, my nose and not his mother’s.  I have not seen him any more closely than you have, have not held him in my hands, and will not hear him cry for about another one-hundred-forty days.  As you see him, he has just drawn his arm up across his left cheek, as if to shield himself from the ultrasound.  My middle brother used to make much the same gesture whenever Dad pulled out the super-8 camera with the spotlight fixed on top.

I did not learn anything from this ultrasound that I needed to know.  But now that I have seen him, I turn to my wife more often, reach my palm out for her belly, and try to feel him there, growing within her.  We have a name for him, and now I begin to associate a face with that name, small though it is, and shy though he is.  We begin now, also, to ask his older sister, as she looks at a picture book or tries to draw a circle, “Will you read to him?  Will you teach your little brother to draw?”

The difference between this little son of mine and me, since it evidently will not be found in the shape of the nose, lies elsewhere.  It is legal rather than genetic.  I enjoy the full protection of the law.  He does not.

My government operates a labyrinthine bureaucracy that might someday figuratively kill my soul, but it works quite ambitiously to keep my body alive.  Its finances have more than once and indirectly also helped my son, young though he is, and yet that same government not only denies that to kill this child would be murder, but puts money in the hands of those who perform such killing with clinical efficiency.  Never is it more clear that the eyes of government, the eye of the law, are merely metaphoric, than in this fact, because no human being could look upon this picture and deny what he sees is a fellow human being.  And yet, that is precisely what my government says-and then turns away and leaves others to dig a grave, or rather, plow a landfill.  True, the functionaries of power occasionally gown their denials of the humanity of unborn children like my son in the taffeta frippery of phrases like “sweet mystery,” and they speak of the “terrible choice” of abortion without explaining why something “terrible” should remain a legal “choice.”  They unleash the dulcet strains and plangent tones of thoughtfulness and gravity on just those occasions when they most wish to avoid thinking altogether of the actual weight of the children their laws consign to the tin mass graves of trash cans.

All politics, Alasdair MacIntyre once said, begins with children.  It ends with them, too.  Discussing the Good or the “good life for man,” in that hoary Aristotelian phrase, has to it a certain ring of abstraction.  But, if we think of politics as the science of living in the world so that it resembles as closely as possible the kind of place in which we want our children to grow up, live well, and possibly grow old, then we will be talking about the same thing, only more concretely and more surely.  Granted this description of politics, what happens when the dominant political spirit of an age becomes so truncated that it not only “begins with children” but ends there too, precisely in the sacrosanct, legal permission for childrens’ murder at any point up to, and even significantly beyond, their “escaping” the womb?

Such a spirit is precisely what it appears to be.  It is the philosophical offspring of those who wish to escape from politics-more precisely, of those who would escape the responsibility of having to act with children in mind.  In cutting society and its politics adrift from children, such persons try to preserve themselves in a vague, Never-Never-Land, where adults may enjoy all the power and self-determination of their seniority while indulging their concupiscent desires without any sense of limitation, finitude, or purpose beyond a moment’s pleasure and the prospect of its iteration.  Open season on the unborn child, in other words, makes it convenient for adults to remain overgrown, over-libidinous children as long as they like-or at least as long as medical technology can prop them up.

Indignant hands with coat-hanger bracelets about their wrists immediately fly up in objection.  “This is not about immaturity and pleasure; it is about rights, sovereignty, and vulnerable women.”  This is all rubbish, of course.  If it were merely about “vulnerability,” one would have to presume some kind of preferential option for the most vulnerable.  Look at my son; is anyone more vulnerable than he and others like him?

It may indeed pretend to be about “sovereignty,” as in the ownership of one’s body.  But no one is owner of himself, and our bodies are constitutive of ourselves rather than inert property over which we exercise complete control.  Look again at my son.  He is unimaginable apart from his body, small though it is; and the course of his life will be measurable and intelligible largely in terms of that body’s growth, decay, loss, and resurrection.  And his total dependence on his mother does not indicate something unique, temporary, and inhuman.  He merely displays more obviously the dependence of all persons on others at all times.  If dependency and weakness are child-like, then none of us ever ceases to be a child in this respect, even though we should hope to leave behind childish things in others.  The murder of abortion and murder in the streets do not meaningfully differ; in each instance the fragility of human life consequent to its intrinsic dependence on others is on display because of an act of betrayal.

Finally, it cannot be about rights for at least two reasons.  Practically speaking, if the legal protection and support of abortion was consequent to the protection of a right, one presumes it must be one of the venerable ones like “liberty,” or one of more recent manufacture like “privacy.”  But how would one adjudicate between the claims of these rights and the equally venerable and more evidently foundational “right to life”?  One cannot adjudicate between the two, so long as one operates with a meaningful definition of the word “right” as something that intrinsically belongs to a person regardless of his condition or actions, something “inalienable.”  When rights are in conflict, there is no rational resolution within the system of rights.

Theoretically speaking, it cannot be about rights, either.  For the very concept of rights is a crude modern teratoma, a ghastly fiction, sprung from peculiar misapprehensions of natural law.  Human beings have found very little in their history that speaks of a right to life-for life is patently “alienable” from human beings and our cemeteries are everyday reminders of that alienation in spades.  We speak of “rights” to make ourselves feel more secure, less fragile, and less dependent on others, than in fact we are.  Gravestones inform us that it is not death that we are in a position to condemn or “forbid,” but only those who bring death about in certain ways.  They tell us that the execution of the guilty may be just, the slaying of the enemy in battle may be valorous, and that the slaughter of the innocent is always murder.  That portrait of my son does not silently speak of rights, but certainly proclaims a primeval innocence.  We would have to look elsewhere-to the clinics of Planned Parenthood, to the Supreme Court, to the Oval Office-to see other portraits that embody the evil of legislated, juridically sanctioned, administratively manufactured murder.

And so, the defenses of abortion are not arguments but prevarications.  They clothe murder-for-convenience in the knickers and periwigs of American liberal respectability.

The violent arms of the “right to choose” fly up again.  Once more, they proclaim, abortion is not about convenience, but about the necessities of the desperate.  If that is the case, then let us look at this image of my son and speak, as W.H. Auden once did, of the “necessary murder.”  “Necessary” is a common word; do we know how to use it?  No such slaughter could be necessary, for that would mean it could not possibly be otherwise.  Are there really no alternatives to the killing of children in the womb?  What precisely is the evil so grave that such killing is its only counteraction?  Early and un-idyllic maternity? A strain on the budget?  The burdens of a deformed or retarded child?  “Excess population”?  The loss of a mother’s life in giving life to her child?  These are conditions of various gravity and sorrow, to be sure.  Some of them are the kinds of fictions in which those filled with avarice and who crave an ethereal worldly domination routinely trade.  Only one of them even approaches a condition of “necessity” and that one confirms in pain what we nearly all profess in comfort: love entails sacrifice.

In recent days, some in the media have decried the protests against President Obama’s invitation to Notre Dame, to deliver the commencement address and receive an honorary degree, as mere “political partisanship.”  To be sure they are correct, but not for the reasons they believe.  I am partisan in desiring the same legal protections for my son that I myself enjoy.  I am partisan in believing that the best world for mine and others’ children is one that welcomes them into life as sacred gifts rather than objects of property available for free exchange, manufacture, genetic strip-mining, domination, and elimination.  I am politically partisan in believing that, because all politics begins with children, any politician who would turn the arms of the law against the children for whom they should exist in service is one who participates in an intrinsic evil.  Any political official, but especially the one who holds the “highest office in the land,” should be viewed as such, and so long as he persists with the grave looks of eternally suspended “thoughtfulness,” with the sly smile of political maneuvering (“That’s above my pay grade”), or with the hunched shoulders of feigned ignorance (“Hey, we just don’t know when life begins”), he should not be honored, but denounced as a villain.

I pray that by some miracle President Obama will not speak at Notre Dame this weekend.  Some small degree of sincerity and self-knowledge should convince him to step aside.  But, so long as he does not, and so long as he stands at the podium or holds in his hands an honorary Doctor of Laws degree, so long will this picture of an actual child-my child-be here as a reminder of the kind of American his law, American law, does not protect.  Look at him.  He is a person.  And like every person, he is not merely a person, but this person.  And this is my son.