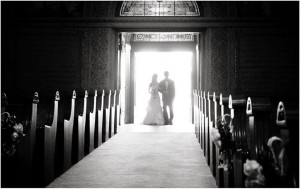 Alexandria, VA Andrew Cherlin – the Benjamin H. Griswold III Professor of Sociology and Public Policy at Johns Hopkins University – has written an important new book on marriage in America entitled The Marriage-Go-Round. (You can hear Cherlin discuss his book on a recent program on the Diane Rehm Show, here).  Its basic thesis is that in America, marriage is a particularly valorized and highly-desired institution, yet American marriage – and indeed, the whole of American relationships – is a remarkably unstable institution, with more American marriages ending in divorce than in any other comparably developed country.  As he writes, what makes American marriage truly different “is the sum total of these differences [from other Western countries]: frequent marriage, frequent divorce, more short-term cohabiting relationships.  Together these factors create a great turbulence in American family life, a family flux, a coming and going of partners on a scale seen nowhere else….  The most distinctive characteristic of American family life, then … is sheer movement:  frequent transitions, shorter relationships” (5).

Cherlin’s basic conclusion:  American marriage is currently incoherent, valorized because of its past status as a core part of our cultural identity (and, I would argue – following Christopher Lasch – because of the role it played as a “haven in a heartless world” during the period of American industrialization), but everywhere seen as ever-more “optional” and subject to the judgments of whether the relationship increases – or forestalls – personal satisfaction.  American marriage – and relationships in general – are increasingly defined above all by the imperatives of individualism, and thereby subject to the demand that any particular relationship is contribute to an individual’s personal development and satisfaction.  If not, then it is subject to fundamental redefinition.

One of the more striking features of Cherlin’s research is his collection of divorce statistics in the year 2000, in which he identified low and high divorce areas.  The areas with highest divorce rates were in the American west and Florida (interestingly, areas that voted Republican in the 2000 election).  His explanation – which sounds more than plausible to me – is that these areas are particularly noteworthy for the mobility of their inhabitants:  most people moved to live in these places, suggesting that these people already had a tendency to change circumstances if they are unsatisfied where they are, and further, that – once arriving at such new places – they have very little by way of social network in which marriages flourish best.  It may be the brute fact of American mobility (and its underlying “restlessness”) that underlies high American divorce rates more than any other factor.

This last observation points to a basic feature of marriage that has largely been left out of contemporary debates over marriage (whether gay marriage or heterosexual marriage).  Marriage is but one part of a larger set of cultural conditions.  Marriage is a condition in which individuality is subsumed to the larger considerations, demands, and obligations of culture and commonweal.  At the most basic level, we sacrifice our autonomy on behalf of the good of a “unit” now defined as a couple, not two individuals.  At a basic level, that unit is the source of future generations – the very source and conduit for the conveyance of human life and particular cultures.  But the unit is itself an expression of, and draws from, the community as a whole.  Thus (as I’ve written elsewhere), marriage is entered into through the blessing of and in the presence of community, not (as Las Vegas versions would suggest) as a contract of individuals.  Marriages derive from, exist for, and are legitimized by the community and culture from which they derive.  Thus, in their earliest instantiation marriages had nothing to do with the wishes of the individuals who composed them.  They were the arrangements by families who looked to the continuity of a way of life (and, yes, family status) rather than the individual wishes of the partners.

Even when the consent of the individuals became a central feature of marriage – an innovation of Christianity, as Remi Brague reminds us (see the last paragraph of the interview that Mark Shiffman kindly linked for us) – it was still understood by all parties that marriage was most fully a union by and for the greater community.  Blessings of parents and the publication of “the banns” was a necessary precondition for a wedding.  This was especially because the married couple – by committing to marriage – was not merely joining to each other in an official capacity, but was in fact becoming a constitutive unit of the community and the conduit for the continuation of culture.  Marriage was thus essential to the life and future of culture, and could not be permitted to take place between two individuals who happened to love each other but who were culturally unrelated.  Rather, and necessarily, marriage was the union not simply between individuals, but between two people who would convey the lived traditions of a culture – most obviously (for instance), a man and woman of the same religious faith (this is one of the main points of Fiddler on the Roof, where Tevye can brook the choices of his two older daughters – even marriage to a communist – because they are both Jews.  It is only when his youngest daughter proposes to marry a Christian that he withholds consent).   Marriage was most essentially a commitment to a community, not the sum of personal choices of individuals.

What can it possibly mean to defend marriage when one cannot also defend or even conceive of a culture in which individualism is not the reigning basis for self-understanding?  Our “debate over marriage” is emaciated and unsatisfying precisely because the contending parties – Left and Right alike – are not even capable of discerning the more fundamental issues at play, and are content to play out the drama in the most deracinated and culture-less venue imaginable – the legal brief.  At the distant end of a broken connection, we debate over an institution – marriage – that carries ancient connotations but for which the cultural preconditions have ceased to exist.  We debate over a dried and dead husk.

For proponents of gay marriage, marriage is a right, a personal entitlement of full individual expression.  Just as heterosexuals sought to be liberated from the constraints of marriage in the name of individual liberty, so now gay individuals seek access to the positive connotations of the word marriage (even where they currently have all the rights and privileges of marriage other than the name, as in California) in the name of rights.  As the California Supreme Court ruled in the case legalizing gay marriage (and subsequently abrogated by the passage of Proposition 8), “The constitutionally based right to marry properly must be understood to encompass the core set of basic substantive legal rights and attributes traditionally associated with marriage that are so integral to an individual’s liberty and personal autonomy that they may not be eliminated or abrogated by the Legislature or by the electorate through the statutory initiative process.” Marriage is thus framed as a matter of individual rights and personal autonomy – simply arriving at the logical conclusion of what had long before been begun by contemporary understandings of heterosexual marriage. Yet, it is this very underlying set of justifications that have eviscerated the actual significance of marriage:  by making marriage into an option – a “lifestyle choice” – as an institution it does not possess in fact what it is thought to represent in theory.  What gays desire, then, is the imprimatur of an institution whose positive connotations derive from a pre-liberal inheritance – its essence a culture-bearing institution –  and which has been in fact largely emptied of those features as the primacy of demands of individualistic self-satisfaction have trumped its culture-bearing features.  Ironically, at the point at which gays may achieve legal access to the word marriage, marriage will largely have ceased to be in any way the institution that was so desirable in the first instance.  But I suppose that’s the point.  One doesn’t see gay marriage advocates demanding a reassessment of no-fault divorce laws, or calling for the introduction of “covenant marriage,” for instance.  The form of marriage that they wish to join is akin to demands to be able to wear nose rings or engage in voluntary amputation.  It’s yet another expression of individual autonomy.

Meanwhile, conservatives largely defend the institution of marriage in two ways – either as a traditional organization that should not be so easily or blithely remade, or an institution based in the natural features of humans, namely, focused on reproduction and basic facts of human sexuality.  While I am sympathetic with both of these arguments, they do not seem to me to get to the core of the matter – namely, that marriage as an institution is simply the crowning part of a culture that must necessarily reject individualism as its basic feature.  Contemporary conservatives have largely endorsed an economic and political system that places individualism at its core (again, it’s worth noting that those parts of the country that are most mobile and where divorce is highest typically vote Republican, and it was, after all, a Republican president – the great hero of the Republicans, Ronald Reagan – who was the nation’s first divorced President).  David Brooks (and Peter Lawler) have embraced the exurbs as the natural place for “conservative” values to flourish, when in fact this particular living arrangement has contributed profoundly and perhaps irrevocably to the erosion of residual conservative impulses that are closely connected to place and memory.  These “conservatives” basically adopt the “haven in a heartless world” viewpoint, defending marriage as a locus where nature, self-sacrifice, duty, obligation, submission of personal autonomy must be promoted – but, the ONLY place where that is the case.  Any such view, of course, is pure fantasy, dooming marriage to failure if only by asking it to bear too much weight, to carry to much of the load of an otherwise radically individualist society.

If there is inevitability to the legality of gay marriage – as many people increasingly seem to think – it is not only because of the efforts of gay activists, but because of the valorization of “individualism” even and perhaps especially by our “conservatives.”  If the horse is already out of the barn, then it was a door that was opened long ago by the very people who now seem surprised that you can’t contain a bad and viral idea.

The Death of the Family