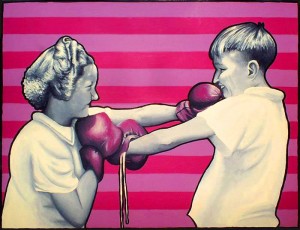 Some heat and even some light have been generated in the numerous comments that followed upon my original posting in which I threw some gauntlets around.  However, some inevitable reductionism has taken place (on all sides), and so I tried to actually put some substance on the bones of an interesting debate on a comment posted late last night.  Because it’s now down around #39 on the comment list, I thought I’d post it here:

The reason it’s an interesting debate (putting aside all the unhelpful name-bandying) is that there is actual agreement about something important – that nature is true and that it exists and its dominion is inescapable. However, how this “reassertion” will unfold is the source of some rather profound differences on the ground.

For PoMoCons of Lawlerian variety, this is a source of optimism – our human condition of alienation and misery will not be “cured” by any amount of technological manipulation, and so the misery and glory of being human will endure, and because of the inescapability of this condition we will all be stuck with virtue more than ever. That said, while the human condition will not be overcome by technological mastery, much of the natural world will be, and that’s ok, so long as we understand that we won’t cease being restless and alienated. So, no amount of McDonalds or living in suburbs will make us truly happy, but it’s ok to be stuffed and comfortable even amid our glory and our misery. Some fast food and poorly-built McMansions won’t make us any more or less miserable. For Lawler, everything is always getting better and worse, so a certain easy-going quiescence should be our default position most of the time. A basic Lawlerian dictum: don’t worry, be unhappy.

The PomoCons are revised versions of first wave liberals (according to Strauss, inaugurated by the thought of Hobbes and Locke), strenuously urging the expansion of human control of the natural world while believing that human nature remains untouched and untouchable by such efforts. Lawler is himself much more ambivalent about Locke, but accepts the Natural rights regime under the pretense that the Founders built better than they knew. He views the pre-modern inheritance as sufficiently vital to withstand the corrosiveness of Lockeanism, although there are times he’s not as confident about its staying power (see my lengthier assessment, here).

For (at least some) FPR’ers (if I may), there is a similar belief that nature will reassert itself, but that reassertion will take a very different form. If we don’t strive to conform ourselves to nature’s laws and limits, that reassertion will be quite unpleasant, even downright ugly. The effort to manipulate the natural world to the ends of human desire have been catastrophic, in the view of FPR’ers, and have resulted in a condition in which modern humans have lost the capacity to exercise prudence, wisdom, and above all, the capacity for self-governance (especially the ability to say NO). The reassertion of nature will be most fundamentally experienced not as a comfortable and well-fed condition of post-modern Augustinian angst, but in the form of a potentially catastrophic confrontation with natural limits and attendant human suffering. There is far less sanguinity among most FPR’ers about our future, though we agree with Lawler that we’ll be “stuck with virtue,” although it will be virtue that we will be forced to relearn by dint of circumstance, not necessarily by “choice.”

PoMoCons are uneasily but pretty firmly aligned with the Republican party as it has been forged in modern times by the likes of Reagan and Bush. FPR’ers are generally pretty discontent with the whole crew, Dem and Rep alike, seeing in the Democrats and Republicans an indiscriminate embrace of ill-used liberty, whether in the “personal” or economic realms. Many of us would like to see some sort of realignment, combining aspects of Marxian critique of the market (though many of us would point not to Marx, but to Chesterbelloc, Roepke, Schumacher, etc.) along with an attendant moral reassertion in the “private” realm. The touchstone for many FPR’ers is, of course, Wendell Berry and his unique capacity to combine a moral assessment of the economic and personal realms and his call for the restoration of living, vibrant and lasting communities of memory and gratitude.

There’s a legitimate debate here, and an interesting one. It’s not between neo- and paleo-cons or any other easily reducible set of labels, but two different visions of the reassertion of nature – an eventuality we all believe to be inescapable – albeit with profoundly different implications and potential outcomes.

That, in a nutshell, I think to be the crux of an actually interesting debate to be had.

Lawler has responded in a subsequent comment, but also posted his response over at PoMoCon today.   Re:  his tweak at my “Marxism,” what I wrote (and maintain) was that Marx was a masterful diagnostician of the effects of capitalism (one need only read his opening paragraphs of The Communist Manifestofor confirmation of this fact), but that I think he was a loon when it came to offering a response.  Indeed, Marx believed that capitalism was a necessary and desirable step on the path to a proletariat utopia, particularly because it would decimate the particular loyalties that people hitherto had evinced, rather than a unity with the other workers of the world.   What FPR’ers lament as the destruction of capitalism, Marx rather celebrates (even as he aspires to foment the next stage in human development).  So, it’s really inaccurate to try to use the label “Marxist” to scare people off the Porch.