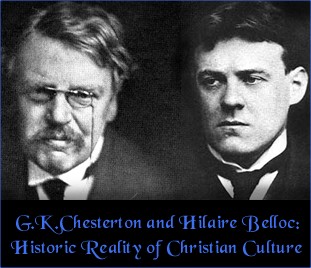 A conference with this title convened in St. Benet’s Hall, Oxford, England, on Saturday, July 11. Organized by the G.K. Chesterton Institute, the great Chestertonian Father Ian Boyd offered greetings to the participants while the gentlemanly Southern attorney, John Odom of New Orleans, served as Chairman. Mr Odom described the small Virginia town of his youth, which was done in by “the Chamber of Commerce model” focused on growth at any cost and consequent instability. The Distributist ideas of Belloc and Chesterton, he said, offered a better way forward.

The opening talk came from Phillip Blond, the United Kingdom’s infamous “Red Tory,” who is said to have the ear of Conservative Party leader David Cameron. If so, Britain may enjoy a very interesting future. Mr. Blond described his conversion to Distributist ideas through reading Hilaire Belloc’s THE RESTORATION OF PROPERTY and Chesterton’s AN OUTLINE OF SANITY. He offered a fairly complex, but compelling, macro-economic explanation for the financial meltdown of 2008. He emphasized (quite correctly I believe) that the decline in the economic status of most Americans and Britons actually began in 1973; this deterioration was covered up at first by inflation; then by the flow of married women in to the labor market; and finally by a massive growth in personal debt, particularly in housing: as this was the “only secured form of property available to ordinary people,…this form of asset acquisition itself became for working families an unsustanable burden and ultimately for many a very real financial catastrophe.” Mr. Blond noted that the “Anglo-Saxon paradigm initiated by Thatcher, Reagan and Clinton” had progressively removed all limits on capital movement and control; “All capital whether local, regional or national became global.” The “securitisation of debt” after 2000 then created a vast new form of instability, which finally unravelled in the Fall of 2008.

Looking to the future, Mr Blond declared the gap between Neo-Conservatism and Marxism to be quite small; and he praised Pope Benedict XVI’s new encyclical, CARITAS IN VERITATE, as a decisive repudiation of neo-liberal economics and an open embrace of Distributist principles. He urged Distriutists to give more thought to how their goals can be made relevant to urban majorities. His own proposals for England include mechanisms to expand types of property ownership other than just housing, such as “investment vouchers” and “child trust funds” for the relatively poor.

As the second speaker, I described “How ‘The Business Government,’ ‘The Loathsome Thing Called Social Service,’ and Other Distriutist Nightmares All Came True.” I defended the Distributist goal of home ownership by all responsible families from current charges that this had brought on the financial meltdown. The real problems in the American housing market reached back into the 1970s, when the purpose of home ownership began to shift from providing decent shelter for a family in a safe and stable neighborhood toward “investment,” resale-ability, and constantly “buying up.” Moreover, regulators after 1970 shifted federal subsides away from help for young families toward “underserved,” “non-family” households. This stripped American housing policy of normative content, and actually appears to have encouraged the practice of divorce and cohabitation.

“The winner in all this,” I continued, “will be the Servile State: Hilaire Belloc’s label for a system where monopoly capitalists, financiers, and government bureaucrats merge into an entity practising state capitalism. Under its terms the capitalists and bankers gain order and protection of their wealth and property while property-less workers receive welfare benefits specifically tied to their wage labor, such as unemployment insurance, which provides security but also confirms their servile status. For his part, Chesterton called this arrangemnent a ‘Business Government’ which, he said, ‘will combine everything that is bad in all the plans for a better world…. There will be nothing left but a loathsome thing called Social Service.” The balance of my talk included examples of the Servile State at work in America, Russia, and China. It also explored the curious new subjegation of women found– most remarkably– in Scandinavia, where the Business Government has essentially socialized “women’s work”: “women find servility in their strange, new, functional marriage to the state.”

Professor Salvador Antunano of Francisco de Vitoria University in Madrid, Spain explored the infuence of Distributist ideas and possibilities in Spain. He traced the roots of the current economic crisis to “the insufficient anthropological basis of capitalism,” where “man becomes an isolated reality.” In turn, this orientation undermined the family, “the first place for culture, the first school of values and morals, [and] the first place for socialization.” He praised Distributism for defending the family “as the very heart” of society.

Professor Antunano lambasted the current Socialist government of Spain for its legal assualts on marriage and family; and he described some efforts to apply Distributist ideas in Spain, notably the COVAP cooperatives farms in Cordoba. Referring to Tolkien’s LORD OF THE RINGS, he also stressed “distriutist hope”: “There is strength that works in History…. It is possible, then, that in todays crisis we distributists and we families may have the feelings of Aragorn and his men just before the final battle for Middle Earth. If we look at our swords, we will find them fragile and weak in comparison with the nazgul and orcs. But something so little like a hobbit and so odd like Gollum can change History. For this reason, in the current crisis at the very gates of Mordor, what seems to be our end may be actually our beginning.”

Journalist Philippe Maxence, with L’HOMME NOUVEAU (“The New Man”) of Paris, France, gave the final formal paper. Essentially, he argued that until about 60 years ago France had avoided submersion into global capitalism. As late as 1950, France remained “a society of peasants and artisans.” Then, the independent farmer-peasants were undone by a national policy to mechanize farming; during the 1970s “it was the turn of the small shopkeeper to be threatened by the expansion of the supermarkets.” The current economic crisis in France, he said, “demonstrates the perversity of a system which subordinates politics to economics and economics to finance, and to the little games of speculators whose only horizon is self-enrichment to the detriment of the common good.” He continued: “for France, the current crisis is also revelatory. It shows that our country has turned its back on itself. France was an agricultural country, nourished by peasant virtues, a country of artisans, who were part of multiple and diverse social networks. They were hardly rich but they were to a great extent independent and property owning, and they owned what was necessary for them to make a living…. Now such a France is gone. Today under the sway of globalization, France is part of a society which has always been denounced by distributists, a type of society which–excuse me for saying it– we call in France the Anglo-Saxon model.” And yet, he now found it a wonderful paradox that the Distributist response, which originated in England, “offers France the chance to reconnect with its own traditions.”

Excellent commentaries on the talks come from Stratford Caldecott and Russell Sparkes, and from an enthusiastic audience containing an impressive number of students. One could almost imagine being part of a meeting of the old Distributist League during the early 1930’s, when an earlier financial crisis seemed to open up possibilities for building a Distributist order of property-owning, independent families. Perhaps results will be better this time around.