Last week,  Philip Bess – the noted Notre Dame University scholar of architecture – delivered a lecture in Washington under the auspice of the group “Conservatism on Tap.”  Bess’s lecture was a first-rate summation of his book, Til We have Built Jerusalem, a remarkable and persuasive effort to relate the principles of new urbanism to natural law.

In one arresting metaphor, he compared our current living arrangements to that of a disassembled pizza, in which we have separated out the various parts of the “pie” – residential, retail, work, school, worship, and so on – and thus rendered the delectable assemblage of life’s goods into tasteless and boring ingredients. 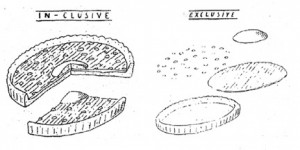 He argues instead on behalf of the integration of life’s activities – for the “whole pie” – as a living arrangement that accords best with our nature as human creatures that aspire to integration, to the achievement of wholeness of our many parts.  As he writes in his book, discussing this specific metaphor,

A neighborhood is to the larger city what a slice of pizza is to the whole pie: a part that contains within itself the essential qualities and elements of the whole. In the case of a city made of neighborhoods, this means that a neighborhood contains within walkable proximity to one another places to live, work, play, learn and worship.  Within the legal boundaries of a postwar suburb, by contrast, the elements of the “pizza” are physically separated and at some distance from one another — as if the crust is here, the sauce over there, the cheese someplace else, and the pepperoni way out yonder.

Bess’s argument, to my mind, was superb and utterly persuasive (just as his indictment of the suburbs was devastating).  What was lacking – and cannot at this point be wholly provided by a professor of architecture, nor, for that matter, a professor of anything else – was a corresponding argument that living in conditions akin to “the whole pie” fosters and sustains the moral environment.  That is, the next step to be taken is an investigation into the relationship of objectively good built environments and objectively good moral human communities – ones that support the good lives of families, neighborhoods, communities; that reinforce good behaviors in our economic and social lives; ones that aspire to preserve and transmit traditions and memory from the past and thoughtful regard for the future; ones that neither treat the “environment” nor other humans as mere means to our narrow ends of personal satisfaction.  Bess’s argument – which all should read and consider – takes us a considerable distance in establishing that there are objectively true reasons for preferring a certain built environment.   More conversations need to be had on the Front Porch and elsewhere exploring the connection between where we live and how we live.