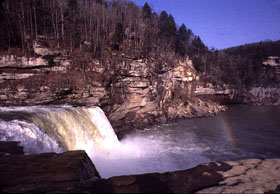 Given domination of the Commonwealth’s institutions by progressivist ideology, it’s unsurprising how few Kentucky students and teachers are familiar with poet-novelist James Still and River of Earth (1940).  After all, Still was of rural folk, and his novel uses the rich speech of mountaineers to depict bygone life in eastern Kentucky hills.  Hence neither could possibly interest today’s commercialist, upwardly-mobile “educated” class, most of whom regard the career of Rick Pitino as infinitely more significant than that of Daniel Boone.  Cubicle-trolls who live for the Basketball Circus Maximus aside, Bluegrass intellectuals are for their part preoccupied playing catch-up with the avant-garde of Manhattan and Seattle – and so can’t be bothered with stories of the land in which they live.  Too bad, for everybody.

The son of a country vet, Still was born in northern Alabama’s Appalachian foothills in 1906.  He received his undergraduate and graduate educations at Lincoln Memorial University and Vanderbilt respectively, attending the latter institution during the climax of the Vanderbilt Agrarian movement.  Prominent Agrarians such as John Crowe Ransom and John Donald Wade were his instructors, and clearly made a strong impression:  Later Still would praise I’ll Take My Stand as “a pioneer undertaking” and “seminal work”, and agrarian themes were to echo in his writing.  At age 26 he moved to a log cabin in Knott County, Kentucky, to take a job as a librarian.  Though he traveled worldwide, Knott remained home until his death in 2001 at age 94.

Still’s own seminal work chronicles the day-to-day, early 20th Century existence of a 7-year old eastern Kentucky boy and his nomadic family.  Via River of Earth we see through a child’s eyes as the boy’s father moves the Baldridge family from coal camp to coal camp in pursuit of work, and dialectic arises between father Brack and mother Alpha.

While Brack Baldridge is generous, hard-working, and even philosophical at times, he sees no danger in the industrial forces transforming the hills.  In contrast, his wife Alpha is far more skeptical of progress, yearning desperately to return to the farming and family-centered existence which preceded King Coal.

Both sides have their say, because unlike today’s ideologues “Still eschews the easy answers,” as eminent poet and literary scholar H.R. Stoneback has noted.  Even though “James Still is the central exemplar of the agrarian tradition”, River of Earth is hardly “an agrarian thesis novel.”   Crudely didactic propaganda is alien to the serious storyteller:

Mother was on the rag edge of crying.  “Forever moving yon and back, setting down nowhere for good and all, searching for God knows what,” she said.  “Where air we expecting to draw up to?”  Her eyes dampened.  “Forever I’ve wanted to set us down in a lone spot, a place certain and enduring, with room to swing arm and elbow, a garden-piece for fresh victuals, and a cow to furnish milk for the baby.  So many places we’ve lived – the far side one mine camp and next the slag pile of another.  Hardburly.  Lizzyblue.  Tribbey.  I’m longing to set me down shorely and raise my chaps proper.”

Father’s ears reddened.  He spoke, a grain angrily.  “It was never meant for a body to be full content on the face of this earth.  Against my wont it is to be treading the camps, but it’s bread I’m hunting, regular bread with a mite of grease on it.  To make and provide, it’s the only trade I know, and I work willing.”

Brack has no knack for farming but is a natural-born miner, and his lazy, parasitic cousins sweep in like locusts whenever the Baldridges remain in one spot for too long.  Thus his nomadic “bread-hunting” is hardly unreasonable, in context, and his remonstrance to his wife that “it was never meant for a body to be full content on the face of this earth” exemplifies anti-utopian wisdom.  Obviously Still respects miners, as practitioners of serious and honorable work; as Stoneback points out, the subterranean “mole-feller” Brack Baldridge seems “a haunting autochthon”, a primordial archetype. He is no cliché of polluting evildoer or exploited victim.

Yet clearly the narrative supports Alpha’s lament for the loss of place and roots, warning of the new lifestyle’s treacherous unreliability.  Thanks to coaligarchy Appalachia’s old socioeconomic fabric of extended family ties, self-sufficiency, and barter was torn apart by the feverish spread of corporate-ruled boom towns and an intoxicating influx of cash currency.  When the winds of finance capitalism inevitably shifted and camps withered, the natives found themselves with neither cash nor land upon which to support their families.

Naturally the significance of land is a recurring topic.  At one point the Baldridges attend a church meeting to hear a renowned preacher named Brother Mobberly, and from his sermon comes the novel’s title:

The preacher raised a finger.  He plunged it into the Bible, his eyes roving the benches.  When the text was spread before him on the printed page he looked to see what the Lord had chosen.  He began to read.  I knew then where his mouth was in the beard growth.

“‘The sea saw it and fled:  Jordan was driven back.  The mountains skipped like rams, and the little hills like lambs.  Tremble, thou earth…’ ”

He snapped the book to.  He leaned over the pulpit.

“I was borned in a ridge-pocket,” he said.  “I never seed the sun-ball withouten heisting my chin.  My eyes were sot upon the hills from the beginning.  Till I come on the Word in this good Book, I used to think a mountain was the standingest object in the sight o’ God.  Hit says here they go skipping and hopping like sheep, a-rising and a-falling.  These hills are jist dirt waves, washing through eternity.  My brethren, they hain’t a valley so low but what hit’ll rise agin.  They hain’t a hill standing so proud but hit’ll sink to the low ground o’sorrow.  Oh, my children, where are we going on this mighty river of earth, a-borning, begetting, and a-dying – the living and the dead riding the waters?  Where air it sweeping us?”

Brother Mobberly speaks in Appalachian dialect – a dialect typically associated with “stupid hicks”, to use the term I once overheard a college English instructor repeatedly, unprovokedly, and carelessly employ to describe local Kentuckians.  But maybe even multiculti diversity-colonists can learn something from the “stupid hicks” they’ve colonized:  A vision of Man’s temporal and physical smallness, conveyed not by geological textbooks nor NASA photos nor French existentialists, but by a Bible-citing hillbilly who proclaims that titanic mountains go “a-rising and a-falling” as “dirt waves, washing through eternity.”

Elsewhere the narrator’s uncle, a farmer, warns that erosion – “land a-wasting and a-washing”—is the inevitable consequence of careless, soil-abusive agriculture.  He frets:  “What’s folks going to live on when these hills wear down to a nub?”  Amazingly, this conservationist sentiment is expressed long before Green-minded philanthropists began manufacturing Enviro-Kidz breakfast cereal … before Al Gore invented recycling, even.

Perhaps my point is the inherent irony of what Wendell Berry has dubbed “The Prejudice Against Country People” — the notion that, compared to mainstream America, rural folk are somehow “socially, intellectually, and culturally inferior to ‘us.’ ”  Today anyone who speaks truth in the Appalachian dialect of Brother Mobberly and the Baldridges is in danger of being dismissed as a “stupid hick”, while the most outrageous inanities are peddled throughout the Commonwealth via the pompous, pseudo-scientific jargon of corporations and academia.

The fact is that if Appalachian dialect truly was “socially, intellectually, and culturally inferior” then River of Earth – with its vivid imagery and seamlessly interwoven dialogue, action, and insights – could never have been composed.  As it is, we should ask ourselves if the cultural displacement of folk poets and artists by slick-talking advertisers and marketers really reflects progress.  Words are for communion, not for salesmanship or sounding clever.  Is the “ecomagineering” of General Electric an improvement over Still’s depiction of mining life?  Or, for that matter, is it an improvement over the original work of a Kentucky coal miner’s son?  Only to those who have no respect whatsoever for the struggles, sufferings, joys, and dignity of their fellow-men.