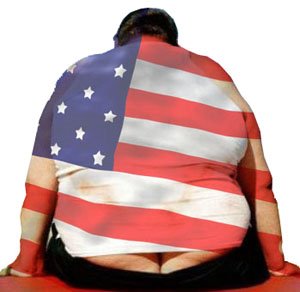 Kearneysville, WV. Tis the season to be jolly. And the jolliest fellow of all is that rotund elf in the red suit. He’s happy. He’s spry. He binges on cookies and milk. It turns out, though, that if St. Nick put on weight at the rate of the American population, he’d have to add a few reindeer to his team and he would, if he is susceptible to human ailments, be at high risk for cancer, diabetes, and a host of other obesity related diseases.

A study released last month based on research by Dr. Kenneth E. Thorpe of Emory University suggests that if we want to control health costs it is imperative that we do something about obesity, “the fastest growing public health challenge the nation has ever faced.”

Indeed, it seems that Americans are doing pretty well if girth is any indication of success. We are heavier than ever before and packing on the pounds at a rate that is staggering. Here are a few of the findings:

What could be causing such an increase? Well, it doesn’t take much of an imagination, but the study lays it out in case anyone is puzzled: “Obesity is attributable to inadequate activity, unhealthy eating habits, and changing food alternatives.” In other words, we Americans are spending more and more time sitting on our ample bums while eating more and more crap. It doesn’t take a researcher to figure out that this is a pretty good recipe for obesity.

Now what makes this all so very interesting is that our leaders are currently locked in a debate about overhauling the health care system to prevent spiraling costs and to insure some 40 million uninsured Americans. But this discussion of obesity forces us to ask a fundamental question: what is health care? Or perhaps we can ask something even more fundamental: what is health?

If, when we speak of health care, we think only, or even primarily, in terms of doctors, medicine, surgeries, and such, we have missed the mark, for health care should primarily be concerned with staying healthy and not recovering a health that has been lost. And the best means of achieving health is to, well, eat healthy foods, limit intake, and get regular exercise. If we neglect these basic rules and imagine that health care begins when we are in need of a doctor, then health care costs will continue to spiral upward even as our health declines. Health care must be concerned with health, and health does not, generally, come from a prescription or one more visit to the doctor. Health, like so many other good things, begins at home.

As it turns out, obesity is tied to plenty of expensive ailments. Cancer is the second leading cause of death in the United States after heart disease, which, as everyone knows, is exacerbated if not caused by obesity. A study by the American Institute for Cancer Research considered the link between diet, exercise, and fatness and estimated that obesity causes more than 100,000 cases of cancer in the United States each year, and the number will likely rise as Americans get fatter.

In July, federal and other researchers estimated that obesity-related diseases account for nearly 10 percent of all medical spending in the United States or an estimated $147 billion a year.

So why is this issue of national obesity not at the center of our health care debate? Because Americans take offense at anyone telling them what they can and cannot eat. They take offense at anyone suggesting that poor choices are at the heart of many of our physical problems. We want health care without caring for our own health. We want our cake and, of course, we want to eat it too. All of it. We demand the freedom to do as we please and then we expect our state-of-the-art health care system to rescue us from our bad choices. But freedom is not free. It requires either responsibility or a nanny to wipe the crumbs from our flaccid chins. And the nanny is not cheap.

Dr. Thorpe has suggested that if the obesity rates among the American population were to return to 1987 levels, the savings would pay for the health care of all those who are currently uninsured. Did you get that? He didn’t say we’d have to return to the hungry days of the Great Depression. He didn’t say we’d have to become vegetarians and give up french fries to boot. We would merely have to return our national girth to what it was in the balmy days when the Gipper occupied the White House, and we could take care of those uninsured for whom so many are concerned.

It seems like a pretty simple prescription: eat less, cut down on the junk, exercise regularly. But because we refuse to put down the Twinkie, our nannies in Washington are only too willing to saddle us with a health care bureaucracy that is as obese as we are. That’s not healthy.

A Season of Gluttony