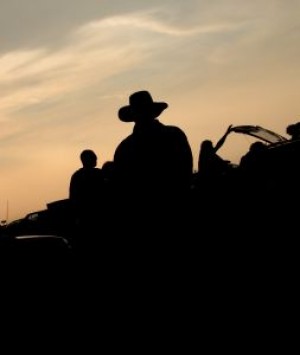 It is an all-too-familiar plot: Government-sanctioned big-business vs. farmers. With the price of dark-leaf tobacco spiraling downward, debt-plagued planters of Kentucky’s “Black Patch” region grew increasingly desperate during the early 1900’s. The gigantic American Tobacco Company had achieved unchallenged control over the market, and planters were stuck selling at whatever price the tobacco trust dictated.

Here, though, the story deviates from the script, for the farmers refused to roll over and die. In 1904, 5,000 of them assembled in Guthrie to announce the formation of the Planter’s Protective Association. Their plan was simple — if enough farmers united to withhold their tobacco from the market, then the Association’s collective leverage over the supply would counter American Tobacco’s control of the demand. The giant commercial trust would therefore be forced to bargain with them on an equal footing.

The plan was attractive. The Association’s ranks swelled, and it acquired allies among politicians and local banks.

But American Tobacco struck back, aiming to bust its new nemesis. In a measure guaranteed to provoke strife in rural communities, the company offered specially-inflated prices to any farmer who repudiated the Association. Unsurprisingly, farmers who accepted this offer were regarded by the Association’s more zealous members as collaborators with the enemy, in much the same way that “scabs” are regarded by labor unionists. As the situation polarized further, these collaborators began receiving unfriendly visits from “the Night Riders” – a paramilitary group of masked raiders who destroyed crops and burnt down barns under cover of darkness. Publicly, of course, the Association blamed the situation on American Tobacco and denied involvement. In reality, of course, many leading Association men were also members of Night Rider platoons.

The struggle escalated in intensity as the Riders developed into a full-fledged guerrilla army. Operations expanded to include large-scale strikes against strategic targets throughout the state. By surprise, three hundred-man bands stormed towns such as Hopkinsville and Perryville, where they cut telegraph and telephone lines, captured the police and fire stations, and then destroyed all American Tobacco assets in the vicinity. The dark sky was repeatedly lit up as huge warehouses were put to the torch with hundreds of thousands of pounds of tobacco inside. Shootouts occurred between Night Riders and local posses, with casualties on both sides.

In spite of martial law and tough talk from Republican Governor A.E. Willson – a former lawyer for American Tobacco — the war only abated when farmers finally received some measure of relief. In 1909 a pro-Association congressman orchestrated the repeal of a federal tax on the tobacco crop, and by 1911 the US Supreme Court had lowered the boom on American Tobacco for having transgressed the provisions of the Sherman Antitrust Act. As the price rose, cooperative political action – much less insurrection — became unnecessary, and a tumultuous chapter in the Kentucky Commonwealth’s history finally wound down.

As usual, the task of making sense of history fell to a poet – in this case, Vanderbilt Agrarian Robert Penn Warren. Like the Planter’s Protective Association, Warren had been born in Guthrie, and thus grew up hearing tales of the Black Patch War. These stories later inspired his first novel Night Rider (1939). When interviewed by his friend Ralph Ellison, Warren suggested that the novel preserves perspectives which have long since been forgotten:

I remember the troops coming in when martial law was declared in that part of Kentucky. When I wrote the novel I wasn’t thinking of it as history. For one thing, the world it treated still, in a way, survived. You could still talk to the old men who had been involved.
In the 1930’s I remember going to see a judge down in that part of Kentucky – he was an elderly man then, a man of the highest integrity and reputation – who had lived through that period and by common repute had been mixed up with it – his father had been a tobacco grower. He got to talking about that period in Kentucky.

He said: “Well, I won’t say who was and who wasn’t mixed up in some of those things, but I will make one observation: I have noticed that the sons of those who were opposed to getting a fair price for tobacco ended up as either bootleggers or brokers.” But he was an old-fashioned kind of guy, for whom bootlegging and brokerage looked very much alike. Such a man didn’t look historical thirty years ago.

Now he looks like the thighbone of a mastodon.

As is typical of Warren’s later novels, Night Rider fires a barrage of implicit questions at the reader. Does a moral content speak in politics, or is politics the mute clash of deterministic economic forces? Is free will an illusion to be dispelled by the age of the machine? Does every impulse, however noble, carry within it the corrupting worm of its own self-destruction?

The narrative follows the rise and fall of Perceval Munn, country attorney and farmer. Munn’s existence is modernity in microcosm, particularly highlighted through two starkly contrasting passages. At the opening of the book Munn is riding aboard a steam locomotive, bound for an Association rally. When the train slows to a halt, the attorney-farmer finds himself being smothered by the mob of his fellow-passengers:

The pressure behind now was not the dead weight of bodies flung forward by the abrupt slowing of the train, but a pressure generated by the wills of all those people behind him, people who wanted to move down the aisle and get off the train and get into the streets… as the movement of the crowd pushed him toward the door, Mr. Munn again resented that pressure that was human because it was made by human beings, but was inhuman, too, because you could not isolate and blame any one of those human beings who made it.

The reader is thus explicitly invited to consider the dehumanizing, anonymizing effects of modern mass-society, and to see Munn’s later decisions as an effort to defy those effects. As literary critic Richard Law put it, the episode “is emblematic of the uncertain relationship between human will and the impersonal forces of history.”

Arriving at the rally, the would-be spectator Munn is cajoled by Association organizers into going up before the crowd to give a speech. At first clumsy and half-ashamed of his own stale rhetoric, he suddenly has an epiphany which directly opposes his experience on the train.

While he uttered the words his glance fell upon a man who stood on the ground directly at the edge of the platform. It was a lanky, stooped man of about fifty, wearing faded blue overalls and a straw hat. The man’s red-rimmed, dull eyes were fixed directly upon him. Then, at that instant, he realized with a profound force that that man there was an individual person, not like anybody else in the world. He realized the fact more profoundly than he had ever realized it about his friends or even his wife; and he saw as clearly as in a vision that man sitting with other men before a small blaze of sticks on which something was cooking, in the dark in the open field…

Channeling this revelation of distinct personhood, Munn’s tongue is set ablaze, and he delivers a heated address, telling the assembled people that their only hope lies in their individual faithfulness to one another as members of a body: “The loyalty you have brought with you here today is everything, it is your only hope.” After concluding his speech he awakens, as if from a trance, to find himself master of the crowd and newest member of the Association’s board of directors. His initial reluctance at getting involved soon gives way, and the dream of planters united together into a strong and self-reliant community soon becomes an idée fixe. This dream-turned-obsession eventually turns him into a Night Rider, and by the light of flaming buildings he seeks clarity in an otherwise obscure and alienated existence.

As a narrator Warren is characteristically ambiguous, providing no straightforward solutions to the issues he raises. He clearly does not endorse the torching of farmers’ barns or even corporate warehouses. But he is not passing judgment on the Night Riders either, much less condemning the original law-abiding idea of a Planters’ Protective Association. More charitable readers will, perhaps, sympathize with Munn’s Sisyphean labor of wringing meaning and identity from a seemingly mechanistic world. Perceval Munn strives to be human, at least, which is more than can be said of many.

Hence Night Rider defies the simple-minded conventional wisdom of our time — and that is the point. In contrast to the talking-heads, Warren viewed radicalism as a symptom vice a cause, and the problem is not solely economic. Men cut off from their origins and alienated from their selves become desperate, and desperate men do desperate deeds.

Unfortunately, conventional wisdom does not recognize being uprooted as a problem at all. On the contrary, our rulers and opinion-makers dub it “liberation.” If anything, they would claim that the problem lies with potential-lunatics such as Perceval Munn, who have not yet outgrown the need for a sense of belonging informed by community and tradition. Why couldn’t those plaintive farmers just stop worrying about their vanishing way of life? Why didn’t they just adapt, move to the city, and learn new job skills for the global marketplace? Why did they refuse to love their freedom?

Such conventional wisdom is also known as Enlightenment liberalism, and is inherent to the American Right and Left. It cannot even intelligently describe human motivations for the purposes of pragmatic realpolitik. Entrusting it with moral order is guaranteed to produce fire and ruin.

The Need for Autarchy