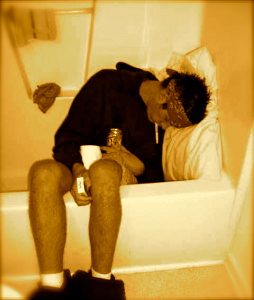 Devon, PA. Some FPR readers may have seen my two-part essay The Empire of Addiction, originally published in First Principles in March and May of 2009, but excerpted on this site.  In Part I, I argued against the neo-liberal globalist utopians (otherwise known as most economists and technocrats) that free trade was good neither in principle nor in effect.  To the contrary, in principle it constitutes a surrender of human reason in an area of activity for which it is exquisitely suited (i.e. politics and oeconomics, household management): classical liberal economics is not the consummation of rational thought but a fideistic flight in which we are borne up on illusory eagles’ wings.  In effect, free trade necessitates the creation of a huge state super-structure: continuous military intervention abroad and corporate welfare and the welfare state at home.  But this arrangement cannot normalize itself, cannot set itself up as the permanent order for which it mistakenly takes itself.  Rather, such complex military and financial forms keep the external forms of the nation in place while it eviscerates its once productive internal organs.

In Part II, I argued that the ideology of continuous growth derived from our failure to distinguish between property and wealth–a clearer way of expressing Aristotle’s well known distinction between the natural and unnatural forms of the art of property acquisition.  Identifying wealth (money in its pure abstraction) with property (the concrete instruments necessary to human subsistence) leads to the validation of perpetual acquisition and growth disruptive of the self-sustainability (autarchy) of households, and consequently of the society to which those households are naturally ordered.  The result of the regime described in Part I and the way of life condemned in Part II has been a society largely built on and fed by usury, and which, therefore, has substituted military might, ill-begotten currency, and easy credit for making the things our country needs to sustain itself.

I proposed, in other words, that supposedly conservative “free market” principles and liberal bureaucratic “managed society” were two halves of one unnatural system; they derived from the normalization of usury and the failure of economic policy and actual practice to recognize that all true wealth comes in the concrete form of property rather than in the abstraction of ingenious financial instruments; and, further, that

the big stick of the Bush Administration followed by the soft looks of the Obama administration are doing their best not to save American prosperity.  They seek only to delay our nation’s hard confrontation with the fact that we make almost nothing, spend many times more than we can afford, and have, as a whole, no vision of how a truly flourishing domestic economy should be formed.  The warfare of the Bush administration came in tandem with the massive expansion of the role and size of the federal government; its encouragement of easy credit in housing came as just one “welfare” scheme whose debt-creation perpetuated the need for military adventures abroad.  To an equal degree, the acceleration of government enlargement under Obama appears like a promissory note: as it increases our dependence on foreign manufactures and foreign capital to keep prices low and our society in some strained sense “solvent,” it sets the stage for wars to protect “American interests” in the decades to come.

One concern I had with this paragraph was its apparently hyperbolic claim as a “fact” that “we make almost nothing.”  Everyday experience would confirm this, since our consumer goods clearly are almost all imported, but was I not underestimating American production of durable goods and high technology?  I certainly would be open to the argument, given that, in absolute numbers, we remain the world’s largest manufacturer.  But Patrick J. Buchanan , in “Dismantling America,” provides the sort of concrete clarity on this matter that I did not:

Things that we once made in America — indeed, we made everything — we now buy from abroad with money that we borrow from abroad.

Over this Lost Decade, 5.8 million manufacturing jobs, one of every three we had in Y2K, disappeared. That unprecedented job loss was partly made up by adding 1.9 million government workers.

The last decade was the first in history where government employed more workers than manufacturing, a stunning development to those of us who remember an America where nearly one-third of the U.S. labor force was producing almost all of our goods and much of the world’s, as well.

Not to worry, we hear, the foreign products we buy are toys and low-tech goods. We keep the high-tech jobs here in the U.S.A.

As always, his full column is worth the reader’s attention.  But I draw your eyes to it here merely to fill in some more precise details regarding our woefully liquid empire: like a ‘seventies swinger we have passed out drunk in the bubbling hot tub of our financial markets, continue to slur our desire for another shot of Crown Royal (note to reader: interpret cleverly), and ignore that making things, growing things, doing things with our hands and close to the ground is not simply an Arcadian vision to which the only correct response is, “Wouldn’t that be nice?”  Rather, such are the conditions not of a primitive economy but of a sound economy.  I join in the call for small agriculture, small business, and widely distributed property not merely because I find it pretty, and not only because it is good for the soul and trains it for moral seriousness and affords it the conditions for the good life.  I join that call, because economics is not a concatenation of mathematical abstraction and pure potency: it is a concrete reality that tells us a household, a community, and a nation can only sustain themselves in a limited number of ways.  We have abandoned those sustainable ways in favor of the bubbling flow of numeric manipulation.

So long as the federal government continues to monopolize the power of treaties and tariffs, it should deploy them for the purposes of protecting vital American industries.  It should do so with an eye to encouraging the proliferation of small, geographically dispersed firms, favoring none.  Wise, if limited, tariffs, strictly enforced competition law (e.g. anti-trust law), and re-devolution to the States the power to enforce regulations regarding corporations within their borders: here are three decisive starts to a restoration of American society.  The State at any and every level should regulate financial dealings so they conform to nature, allowing the kinds of investment proper to shared ownership and concrete financial partnerships, but prohibiting the irresponsible manipulations that have allowed finance to become an industry unto itself, wherein financial stakeholders remain radically removed from the productive enterprises on which their abstract profits are “vaguely” based.

Individually, we should prioritize the acquisition and sustaining of productive property as the real foundation of our own security–its illiquid character may make it impossible to move or transfer, but that is the point.  We should discourage — listen to me, discourage — our children from studying finance and entering into geographically dislocated careers of number manipulation, and encourage them to start or join enterprises productive of the concrete instruments sustaining of human life.  To the extent we do otherwise, we are unloving parents and failed human beings. 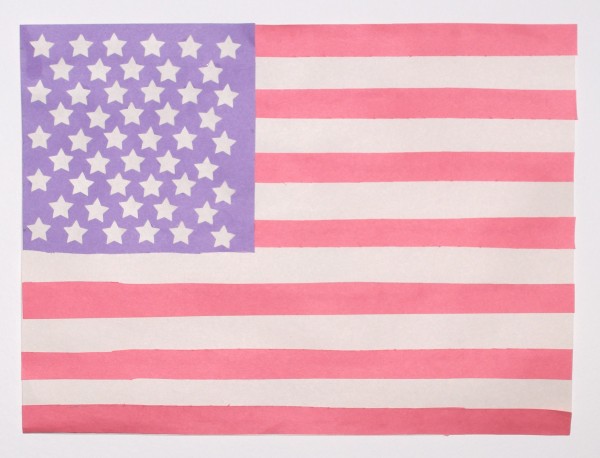 To lighten such dour admonitions, even at the risk of undermining their already dubious authority for the reader, let me conclude by sharing a picture of the American Flag my daughter and I made on a snowy day a few weeks ago.  The work was absorbing; it was more satisfying than the composition of this essay; I could sense even in this most trivial of industries the all-absorbing makings of happiness ever present in the uniquely human activity of work.  Man, as John Paul II says, is the subject of work: work is for him, and his dignity is expressed in it.  The joy of cutting up construction paper with my daughter confirmed that; I look forward to the more serious and productive work the summer months will make possible.