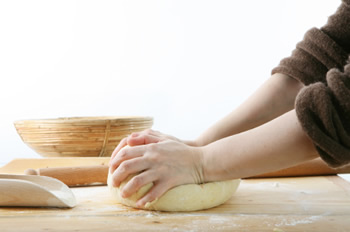 Kearneysville, WV. Several years ago, I had dinner with a group that included a well-known economist. It soon became apparent that this man was a lover of wine. His tastes were refined, he possessed a broad knowledge of the subject, and he relished talking about the various facets of wine production. Sometime over the course of the evening, I mentioned that I have a small vineyard on the hill behind my house. He gave me a quizzical look and then shook his head. “I believe in specialization,” he said. The obvious implication was that he would leave the wine-making to the specialists, for they would create a better product that he could as an amateur. Likely he was right on this score. But is anything gained by doing something yourself? Is anything gained by sinking one’s hands into the soil, carefully tending young vines, and learning the specific knowledge of soil types, grape variety, and climate? Do careful attention, diligent work, and long months of patience impart a flavor note to the final product that is acquired in no other way?

In January 2010, The Wall Street Journal ran a piece on the way economists think. One example: two economists gave a friend $150 to hire movers instead of helping him themselves. Of course, few people relish moving and even less helping someone else move. There are innumerable ways most people would rather spend their time. Yet, by simply giving a friend the money to hire movers, are the obligations of friendship discharged? When we send strangers to do the work of friends, we are outsourcing camaraderie. We are denying the friendship the times of mutual discomfort that can draw the bonds tighter even as the difficulty is lightened by sharing it. Lost is the face-to-face interaction between persons that adds another small layer solidifying the friendship.

Wilhelm Röpke recounts a conversation he had with a prominent economist in the aftermath of WWII. As they strolled along the streets of a German town, Röpke pointed, with satisfaction, to the many small vegetable gardens kept by the residents of city. The economist shook his head disapprovingly and grumbled. “A very inefficient way of producing foodstuffs.” Whereupon Röpke responded, “But perhaps a very efficient way of producing human happiness.” This rejoinder takes us to the heart of the matter. Happiness is the proper end of life. By happiness I do not mean the glib and transitory pleasure that so often is confused with happiness today. Happiness, as described by classical and Christian thinkers, is a life of excellence in accordance with goods and standards (both natural and supernatural) that are suited to human beings. This sort of happiness is not achievable in isolation, for humans are creatures fit for community.

I relate these anecdotes not to pile on the economists but to highlight a way of thinking that extends far beyond the cozy walls of the economics department, permeating many aspects of our culture. It is a way of thinking based on the notion of efficiency and specialization, and when these are combined with relative affluence, the results are significant. Ultimately, the health of individuals and communities are in jeopardy.

There is a connection between what might be called the “neighborly arts” and a life well lived. When we make it a point to learn various skills, we become better equipped to help our neighbors. When we can grow a tomato, we can then share it with others. When we can build a fence, install a light fixture, or repair a carburetor, we can not only take better care of ourselves and our families, we can better serve our neighbors. Learning to tend livestock, cultivate fruit trees, and keep bees provides the satisfaction of doing for oneself, but we can also share the bounty. When times are hard, the neighborly arts are at a premium. In times of affluence, they can atrophy under the illusion that specialization and purchasing power are all we need. But if we fail to cultivate these practical arts, the hard times will be harder and the opportunity to help our friends and neighbors in practical ways will be diminished. The bonds of community will be attenuated even as our collective need for a strong and energetic state will correspondingly increase.

Could the neighborly arts be one facet of the art of freedom? Could these practical skills expand our opportunities to engage others in the associational life that is the best bulwark against the nanny state? Could these skills serve to bind families together even as they facilitate one aspect of economic independence? Could the neighborly arts provide the opportunity for healthy interaction with the natural world unencumbered by the weight of institutions and expectations that distort reality by virtue of their scale?

We once had a neighbor who made his living as a chiropractor. One evening he had dinner with us. At the end of the meal, he pushed himself back from the table, smiled with satisfaction, and asked if anyone needed an adjustment. My wife had been having some neck pain, and he happily plied his trade on the hostess. I jokingly told him that if he ever had a philosophical crisis, I would be more than happy to use my skills on his behalf. The joke worked, but it also served to highlight the fact that training as an academic is inadequate. Manual skills are necessary for both living well and for being a good neighbor.

Recently several young women asked my wife to teach them to make bread. They knew that homemade bread tastes better than much of the stuff on the shelves at the grocery store, they knew it was healthier to eat, and they knew that my wife likes to bake a variety of loaf and artisan breads. So for several hours on a Saturday in the spring, our kitchen was full of sifting flour, laughter, and questions as my wife instructed these young women in the art of bread-making. Perhaps one day these young women, now grown older, will teach their own children or a neighbor how to make bread. In the ensuing years, they will no doubt refine their skills, adding particular nuances and flourishes of their own, so that when they pass on the knowledge to another, it will be what they received but different nonetheless. In such a manner is any living tradition passed from one generation to the next.

The neighborly arts, like all arts, are cultivated in practice and passed on from one person to another in a particular place and time. The neighborly arts are placed arts, for they are embodied in the particulars of a local community. They are the humble arts that consist of persons living in proximity with each other and sharing particular knowledge in a way that improves the lives of family, friends, and neighbors. The neighborly arts bind people together in mutual help and affection.

The neighborly arts begin at home, extend outward in service to others, and return in the form of gratitude, friendships, and commitments born of practical skills shared and received. In this sense, I think, the art of hospitality represents in a concrete and intimate way how the neighborly arts can foster good will, good conversation, and good times (not to mention good food). Ultimately, a life together in the presence of extended family, friends, and neighbors is more possible, more durable, and more enjoyable when the bonds of nature, proximity, and affection are strengthened by the mutual assistance born of the neighborly arts. True happiness begins at home.

The Porch in Practice