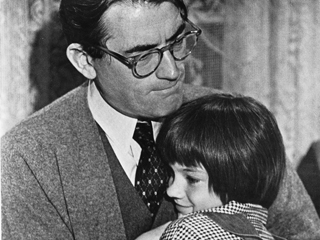 BURNED-OVER DISTRICT, NY. Collin Wilcox died last October, just as we were about to settle in for our annual viewing of To Kill a Mockingbird. Wilcox was the North Carolina actress whose surly white-trash ejaculation Gregory Peckwards—-“A chiffarobe!”—-is one of several lines from the movie that have entered our family lexicon.  (It’s just ahead of “He’s gone and drownded his dinner in sirrup” and behind “You wrong, man—-you dade wrong.”)

I don’t think any American is permitted to exit teenagerhood without visiting the “tired old town” of Maycomb. My daughter’s tenth-grade class has gotten around to Harper Lee’s novel, though she and I read it together a couple of years ago, for in my own high-school days I dodged the Mockingbird draft, lighting out instead for the era’s Kurt Vonnegut-Richard Brautigan territory.

An uprooted Southerner once told me that TKAM was the Southern novel for people who hate the South, but I don’t think so. The racial injustice done Tom Robinson disfigures Maycomb, but it doesn’t define Lee’s town.  Besides, the harshest criticisms of any place come from those who truly love and belong to it. For American examples, see Gore Vidal, Edmund Wilson, William Appleman Williams, Sinclair Lewis, and Edward Abbey.

Harper Lee, who turned eighty-four on April 28th, still resides in her hometown of Monroeville, Alabama, an act that says everything that needs to be said about her loyalty to her place. A mutual friend tells me that she is a witty lady with a generous streak and a fondness for Christian charities.

What struck me about the novel was young Scout’s love of her father, the noble lawyer Atticus, and that father’s love of his town. In one of the book’s loveliest lines—-not uttered in the film, alas—-Atticus asks Scout to “remember this, no matter how bitter things get, they’re still our friends and this is still our home.” There is a world of meaning in that sentence.

Lee told the story of Atticus Finch and Tom Robinson and the recluse Boo Radley not to damn her people but to commemorate them.  She confessed her desire to “chronicle something that seems to be very quickly going down the drain. This is small-town middle-class southern life as opposed to the Gothic, as opposed to Tobacco Road, as opposed to plantation life.”

“As you know,” said Lee in the early 1960s, “the South is still made up of thousands of tiny towns. There is a very definite social pattern in these towns that fascinates me. I think it is a rich social pattern. I would simply like to put down all I know about this because I believe that there is something universal in this little world, something decent to be said for it, and something to lament in its passing.”

Late as we are in the American derangement—-or are we early in its salutary realignment?—-this cherishing of the small-town South, even while acknowledging historic cruelties, is all to the good.

I must have seen the movie twenty times, and spare me your sneering about arrested middlebrowism. Was there ever a more startling film debut than Robert Duvall’s turn as Boo Radley? Has there been a better children’s ensemble than Alabama actors Philip Alford and Mary Badham and Connie Stevens’s half-brother (!) John Megna as Dill, little Truman Capote? (Megna went on to chant “bonk bonk on the head” in a famous Star Trek episode.) Ever hear the word “chiffarobe” used in another film?

The occasional cringe-inducing moments of liberal fantasy—-as when the black citizenry, packing the segregated courtroom balcony, stands as one when Atticus passes by—-I chalk up, perhaps unfairly, to the vanity of Gregory Peck, who, as Charles J. Shields revealed in his 2006 Harper Lee biography Mockingbird, complained at diva-ish length that his character didn’t have enough screen time. Peck’s sanctimony works very well in the film, however; it infuses, rather than embalms, Atticus Finch. Thank the casting gods that Universal’s first choice—Rock Hudson—didn’t get the part.

I don’t suppose I’ll ever read the book again, but many elements of the movie repay repeated exposure, from Elmer Bernstein’s superb score to Horton Foote’s screenplay, a model of concision and concinnity from which extraneous characters in the novel (such as annoying Aunt Alexandra) are wisely excised. And the supporting performances are magnificent. James Anderson, who played the malevolent Bob Ewell, was a drunken Alabama-born Method actor so lost inside his part that he came to hate Gregory Peck.

For all this we can thank the tomboy who worshipped her father and aspired to be “the Jane Austen of south Alabama.” Happy birthday, Nelle Harper Lee.

* This appeared in the May issue of The American Conservative, a magazine far too interesting to be burdened with that hopelessly corrupted word conservative. Do subscribe, please: www.amconmag.com.