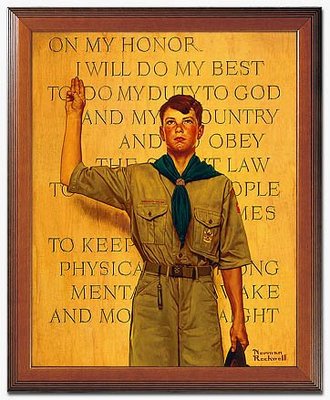 Kearneysville, WV. I was never a Boy Scout. Or a Cub Scout. I recall attending one meeting when I was eleven or twelve, but it didn’t seem that well organized, and I’ve had an antipathy to meetings ever since. Besides, my dad taught me to hunt, fish, and camp, and he made darn sure I could build a fire and tie a square knot. He also taught me to work hard and be honest, so I suppose I got at least part of the spirit of the Scouts without ever being one. At the very least, I’ve always held the Scouts in high regard, and when I hear that one of my students is an Eagle Scout, I take notice. That means something special.

I was surprised, then, to read a recent ABC News report that the the Cub Scouts are now offering a belt loop for video gaming. According to the article, the point is not simply to master video games. Rather, the goal is to teach children to be media savvy.

To earn the belt loop, Scouts have to learn about the video game ratings system, play a parent- or teacher-approved game and create a schedule that includes chores, homework and game playing. Scouts trying for the pin must install a gaming system, learn to comparison shop and complete other educational tasks. (A website called Boy Scout Trail offers  a detailed description).

Some former Scouts are less than enthused about this turn of events.

“Being a Boy Scout is about getting outdoors, it’s about being in the woods with your friends and building campfires,” said Christian Marino, 24, a Home Depot manager in Emerson, N.J. “It’s not about sitting at home playing video games.”

Marino said he joined the Scouting as a Cub Scout, graduated as an Eagle Scout and learned valuable leadership skills along the way by constantly interacting with peers.

This discussion raises important questions about the changing nature of childhood itself and the increasing tendency for children to remain inside and plugged in. In this vein the ABC piece offers some sobering numbers:

A March report in the journal Pediatrics said that children and teenagers spend more than seven hours every day using media, such as television, video games, cell phones and computers.

Children are tuned in, wired for sound, and texting. No doubt such a fact has contributed to this attempt by the Scouts to prepare their young charges for the media saturated world that they are already actively engaging. Yet, I wonder. Maybe parents should get a merit badge for telling their kids no. No, you don’t need a cell phone. No you don’t need the newest video game (or any video game for that matter). No, you don’t need an Ipod (or anything else that isolates you from the rest of the world). No, you don’t need to watch anything. Here’s a ball, go play. You say you’re bored? Here’s a broom. Clean the garage. Cut the grass. Wash the car. Vacuum the house. Clean the toilets. Someone has to do those things. You’re part of the family.

There’s no reason to create a false picture of reality for the youngsters. That way adulthood won’t be too much of a shock.

Perhaps we parents need to set a better example. If our kids see us enslaved to our Blackberrys, laptops, and cell phones, is it any wonder that they should think that is normal? The outdoors is, for many, not an integral part of our lives but something we quickly pass through in order to get from one indoor venue to another. Or it is something we set out to consume on special weekend getaways from which we return exhausted, bug-bitten, and grimly satisfied. In either case, the natural world is something we brush up against occasionally, either as an obstacle or an item to consume, but it is not a fundamental part of our lives, and we surely don’t conceive of ourselves as part of it. Nevertheless, we are part of it, and it is part of us. To live well is to come to grips with the many aspects of that truth.

With all that, the technological fun house that is the modern home makes the great outdoors pale by comparison, if, that is, the expectation is immediate and constant bursts of electronic stimulation. Indeed, enjoying the outdoors requires a willingness to submit to the pace, scale, and vocabulary of the natural world. One cannot step outside and expect the world to present itself as a video game, a music video, or even as reality television. There is a vastness that dwarfs the narrow confines of pre-packaged entertainment where the channel or the volume can be changed in an instant and at a whim.

In his book, The Last Child in the Woods, Richard Louv quotes a child whose frankness makes his words all the more troubling. “I like to play indoors better ‘cause that’s where all the electrical outlets are.” Now aside from the occasional current bush, the kid is dead on, but what does it say about our children that they would rather engage with an electronic screen than with the blumin’, buzzin’ confusion outside their doors? Is it any wonder that child obesity is at all-time highs? Is it any wonder that the passivity inculcated by hours of electronic media every day would fashion children into consumers who are all too happy to feed at the public trough as long as it doesn’t hurt or pull them away from The Simpsons reruns?

Recently I began planting our garden. Without being asked, my oldest son, Seth, who is twelve, joined me. We spend an hour or two on a warm Sunday afternoon loosening the soil, forming rows, and planting peas, beans, and lettuce. We worked side-by-side, talking as we worked. The pace was steady but not hurried, even though dark clouds were piling up in the west. At times we were quiet, joined by a common pursuit, working as complements of each other. The soil was warm, birdsong filled the air, and we were together. We finished as the first heavy drops of rain began to pock the freshly turned soil.