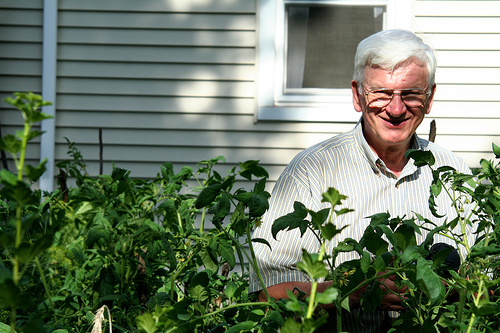 Houston, TX. I have a strong suspicion my grandparents are living on through me, because they helped me to take my place in a membership of good people, some living, most of them dead, and they gave me a story to live . During the summers, I spent a lot of time at their house. And if I had time I would share with you stories of my grandfather, Aaron Sangster – carpenter, craftsman, gardener. He did the things that have always been done, things that will continue to be done. He worked with his hands, and he worked in the soil.

My grandpa and grandma lived on a 3 acre plot in a semi-rural community outside Sacramento, and a goodly portion of their parcel was a manicured garden. Grandpa loved fresh vegetables. I never thought for one minute that vegetables came from the store. I knew where they came from – my grandfather’s garden. He loved the rhythm of a life shaped by gardening.

To this day, I have embossed on my mind vivid pictures of him following his rotor-tiller. With felt fedora pressed on his head, and a wet shirt stretched across his back, he walked slowly, with outstretched arms shuddering, and shoulders shaking. Below the chugging motor, and silver exhaust, the black earth turned along with the compost he had painstakingly cared for all winter. Upon recollection, I suppose that scene is a lot like the compost he was tilling – the dead was living, connecting all things, making the past come to life in the present.

I might have been playing in the patch of dirt by the porch, or poking around in the pump-house, but I knew the ground was finally ready when the puttering rotor-tiller was replaced by the whining table saw. That meant grandpa was in his shop cutting the wooden stakes he would tap into the ground and cap with empty seed packets. They would mark his rows and remind him of what went where.  Then he stretched white kite string from one end of the garden to the other. I never knew my great-grandpa, but I suppose his hands moved like his son’s – slowly, methodically, with all the precision of a surveyor. My grandpa’s rows were plum.

Long before Miracle Grow made city folk into agrarians, my grandfather’s garden brought rememberers and story-tellers together at grandma’s table for sliced and fried green tomatoes, raw yellow peppers, and baked sweet potatoes. Sitting at that table, surrounded by food, immersed in memories, a membership of dead people I’d never seen welcomed me to a place I’d never been. Elmer, and Edith, Janice and Bobby-Dean, long gone, but present, extended their hands and beckoned for me to take my place.

I was just a boy with spindly limbs and boney knees, but I knew the importance of stories, so I sat with my grandparents on the porch, and drank sweet tea, and listened to them talk. In the evening, after Hollywood Squares, we’d sit on the porch and the thick smells from the garden wafted lazily around us, and finally settled gently within us.

As I look back I can see that the beauty of my grandfather’s garden not only transfigured an otherwise plain plot of land, it began to transfigure me. For that garden echoed with the haunting sounds of Eden. And from it came the alluring smells of that first garden. In many ways I was like the homesick Mr. Mole in The Wind and the Willows. He had been away from his beloved borough for too long, and when he emerged from The Wild Woods, his home began to woo and draw him. Here are a few lines from the story.

“It was one these mysterious fairy calls from out [of] the void that suddenly reached Mole in the darkness making him tingle through and through with its very familiar appeal, even while as yet he could not clearly remember what it was. He stopped [in his] tracks, his nose searching hither and thither in its efforts to recapture the fine filament, the telegraphic current, that so strongly moved him. A moment, and he had caught it again; and with it this time came recollection in the fullest flood. Home! That was what they meant, those caressing appeals, those soft touches [that] wafted through the air, those invisible little hands pulling and tugging, all one way (The Wind and the Willows)!”

After ruminating, I can see that’s what my grandfather’s garden did to me. It bewitched me. It awakened me to the numinous and helped me to see that I belonged in a garden. It was my first home, and eventually it would be my last. And as I got to looking, I could see that God was turning’ the world into a garden, and it occurred to me, we’re being saved along with creation, not apart from it. We’re not taken out of the world, but we’re being transfigured, slowly, gradually, deliberately, with it.

So, when this hit me like a piano falling from a high-rise building, I did what anyone born for a garden would do – I went for a walk. And there it was – the world – blooming and blossoming just like my granddad’s garden, just like God said it would. Roses unfolding. Vines crawling. Trees budding. And the smells! Thick and rich.

And once during my walk, when I was almost back to my study I was so overcome by the earth’s beauty and God’s goodness that I had to stop – and as I stood there staring at some winter cabbage and as the water was welling’ up in my eyes, two things happened, two things so special someone might be tempted to call me a liar.

First, a momma dove landed on a limb just above me. And she had a long piece of grass in her beak. And I knew what it was for – new life – she was making a home for her little ones that were coming into the world to play their part in this great transformation.

Then something happened that was so amazing, so beautiful that I am likely to remember it for the rest of my life – a toddler came bursting out of his house, naked as a jay-bird, laughing and squealing, running from his mama like he’d never heard of a man named Adam or a thing called the curse. And in that moment it wouldn’t have surprised me in the least if a lion and a lamb would have walked up and lied down right there next to one another.

Fr. Doug Sangster lives with his wife in Houston, Texas, where he lives the common life with his parish, Holy Trinity Anglican Church.

In Defense of Okra