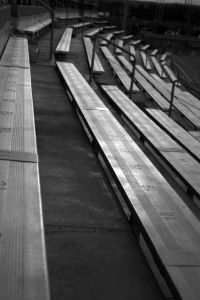 This piece originally appeared in the American Conservative. Visit their website to donate or for more articles like this one.

Opening day for the Batavia Muckdogs approaches, and with it the resumption of a long, leisurely, blissful conversation in which living and dead participate.  (Alas, the dead sometimes play third base or catch for our team.) I feel intensely the presence of those who have shared these many hundreds—-maybe a thousand, by now—-evenings of my life at Dwyer Stadium. Let me tell you about one such ghost.

The last time I saw Dennis Bowler was in September 2004, during one of those melancholy late-season games when the chill of summer’s end is in the air, and even though I haven’t darkened a classroom door for decades the thought of school lours over me like a prison sentence. Dennis had been sick for a couple of weeks with a mystery ailment. But even at half-speed, Dennis was irrepressible. “See ya tomorrow night,” we both said as he left the third-base bleachers in the 12th inning for the drive back to Gasport. It didn’t work out that way. Dennis made it home that night and then dropped dead of a heart attack.

If ever you were minding your own business at a Western New York ballpark or high-school gym and you were buttonholed by a fast-talking man telling you everything he knew about nuclear physics, British Columbia, or how to make a baseball bat, it was Dennis Bowler.

He loved to talk. He talked more than any person I have ever met, often about his ancestors or daily life in Niagara County. For a frenetic man, he was content in his place, fully at home. His stories included such local characters as the unfortunately named Israel “Izzy” Humen, for whom Dennis had an overwhelming sympathy. He hated meanness and cruelty. I suspect he had been teased and mocked more than once, and he repaid the world not in bitterness but in kindness.

Dennis loved those names and numbers that spice our lives but that we depreciate with the word “trivia.” He’d ask you to name the vice president of the Confederacy (Alexander Stephens) or Hank Greenberg’s lifetime home run total (331). He could recite the starting lineup of every girls softball team in the Genesee Region League. When Dennis turned 60 in August 2004, the Muckdogs p.a. announcer asked him to stand up and take a bow. Dennis was so busy yakking that he never heard the chorus of “Happy Birthday.” Even then, Dennis looked 40 and acted like a coltish boy. He would race teenagers for foul balls. When he got one he’d hold it aloft, beaming, like a prospector who’d just panned a gold nugget. Then he’d give it to a child.

Dennis resided in the family homestead on Ridge Road, fruitbasket of the Northeast. He lived alone and drove a rusting jalopy distinguished by its varying shades of blue. Now and then he’d stop by my parents’ house to pour water down its chronically leaky radiator. He farmed as many acres as he could and sold his produce at a roadside stand. He brought corn to the games and gave it away. He also painted houses, taught hunter safety courses, drove a tractor for Becker Farms, and in winter he substituted at local schools. No kid who ever had Mr. Bowler as a sub forgot him.

Dennis worked hard and with an almost beatific cheerfulness but he could not afford health insurance. He hadn’t visited a doctor in many years. What if? Yeah, what if. One abiding memory of Dennis: in his last summer he brought a telescope to Dwyer Stadium. Not to check out the chicks; rather, Mars was at its closest approach in millennia, so he trained the scope on the Red Planet and the moon and we took our peeks.

Dennis was so utterly without guile, so joyful, so ravenous for knowledge. He lacked entirely the internal brake that keeps most people from bringing telescopes to baseball games.  And good for him. During that game Dennis ran over to the first-base bleachers and taped a napkin to the fence. He dashed back, pointed the telescope at the napkin, and asked our then 10-year-old daughter to take a look. It read HI GRETEL.

He was such a sweet, innocent man, poor in purse but rich in spirit. Sometimes I think of Dennis keeling over in his bathroom, perhaps at 3 a.m., the soul’s midnight, as Ray Bradbury calls it. But more often I think of him bounding up the bleacher steps two at a time, talking about Western Canada, running after foul balls, telling Gretel corny jokes, and smiling. Always smiling.