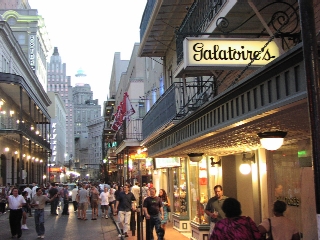 My favorite New Orleans restaurant is Galatoire’s, serving French-Creole food on Bourbon Street since 1905.  In fact, Galatoire’s may be my favorite restaurant, period.  I’d want them to cater my last meal.  I’d begin with a Sazarac and move on to – well, I’m not going to start listing dishes because I couldn’t stop.  (OK,  just some appetizers:  fried eggplant and soufflé potatoes bearnaise, shrimp rémoulade, crabmeat maison, oysters en brochette or Rockefeller. . . .)

But I also like Galatoire’s for the comforting fact that if the chef dropped dead tomorrow I might never know it.  Nothing important would change.  New Orleans has a lot of places like that – not just historic French Quarter restaurants like Galatoire’s, but neighborhood Sicilian-Creole places and cramped little corner po-boy shops.  Katrina closed many of them for good, alas, but the ones that remain are pretty much the way they were the first time I ate there.  Just a little cleaner, maybe, with the new paint.  Like Orthodox icon painters, their cooks come and go, some are more skilled than others, but the difference is largely in execution.  The subjects are pretty much provided by tradition, revered, and slow to change.

Inevitably, change takes place, but, as in Darwinian evolution, it’s usually only incremental.  Spinach in Oysters Rockefeller, for example, is a mutation that seems to have survived; otherwise the dish is identical to the original 1899 recipe.  For a completely new dish – the equivalent of a new species – to survive, it must overcome the innate conservatism that sees no reason to try something new when the old is just fine.  Sure, if that obstacle can be overcome, your creativity will be acknowledged and honored – forever.  Oysters Rockefeller will always be identified with Antoine’s, even if everyone serves them now (and some do them better than Antoine’s).  Just so, Oysters Bienville will always be Arnaud’s and blackened anything, K-Paul’s.   Everyone knows that Pascale’s Manale still serves the ancestral “barbecued” shrimp from which other versions have evolved, and when “chargrilled” oysters turned up on Felix’s menu, I asked the waitress, “Drago’s?  (“Yeah,” she said, “but better.”)  But in a food culture like this, most experiments fail, and leave no trace.  Many are never tried in the first place.

Obviously, this way of doing things makes it harder to become a celebrity chef. New Orleans has a few  – Emeril Lagasse and Paul Prudhomme, for starters – but a different kind of city would have a lot more.  “Celebrity chef” is not a contradiction in terms exactly, but, like “student-athlete,” it’s an unnatural combination in which one half usually suffers, so it’s not at all a bad sign that it takes two clicks on Galatoire’s website to find a very small headshot of the chef (or, for that matter, one of the boss, who’s not the same person).  Compare this to what goes on at a place less than a mile away, where the cult of personality amounts almost to parody. On the opening page of its website, the image of the owner/chef appears to rise slowly into view against the backdrop of a star-spangled sky, to the accompaniment of Chopin’s Fantasie-Impromptu  When we went there, our waiter opened with a spiel about what the chef had been thinking and doing lately.

You know what?  I don’t care.  I prefer the waiter at Galatoire’s who told us to avoid the trout because it wasn’t very good that day.  That’s useful information.  But it’s simply impossible to imagine a waiter at this other place telling you  to avoid the Tasmanian King Salmon.

Think about that, by the way.  Tasmanian King Salmon. That ought to drive you nuts if you’re a “locovore.”  Me, I’m not, if that means limiting myself to local produce.  What I treasure is local cuisines, and if they call for exotic, expensively imported ingredients, so be it (although let’s work on getting them produced locally).  But that’s not what’s going on here.  No, we’re told that here the chef is “leading the local dining scene into a bold new era of dining with exciting Global-Modern cuisine.” That calls, I guess, for global salmon, and if this Aussie fish really is something special, of course there should be a place for it on a menu in Louisiana, and to hell with its carbon footprint.  But since “Tasmanian King Salmon” is just a marketing term for “farm-raised Atlantic salmon imported from Down Under at considerable expense” (look it up), it’s probably one of those things that should stay in Vegas. It’s on that menu just to impress — like the way our food came in a coup de theatre that had a team of waiters popping up in unison, like weird plate-bearing Rockettes.

Look, going to New Orleans and eating “Global-Modern cuisine” is like going to Bologna and ordering sushi.  Sure, you can do it, but why would you want to?  I feel about the cuisine of New Orleans the way I feel about wood-cooked North Carolina barbecue or the old Book of Common Prayer.  This trendy globaloney makes me curmudgeonly — it makes me want to say that natural selection has done its work, so leave it the hell alone.

But I only say that because I’m cross.  In truth, I welcome some innovations.  I’m not saying you can’t tinker with these things, play around.  Nothing’s perfect. You can honor a tradition by refreshing it, as Chef Donald Link and his colleagues do at their restaurants.  For example, the spanking new Cochon Butcher now serves the best muffuletta in town — a completely traditional sandwich, but made from meats prepared right there — and Link once honored his Cajun heritage by serving us an astonishing dinner of crawfish five ways, at his flagship restaurant, Herbsaint.

Let’s hope celebrity doesn’t spoil the boy; for now, he’s perfect.  When he couldn’t find a reliable supplier of Louisiana frog legs, for instance, he could have served “cuisse de grenouille des marais du Bangladesh,” but he didn’t.  Instead he took one of his most popular dishes off the menu and now serves it only when he and his staff have had a chance to spend a night on the bayou gigging the critters.  That his cookbook, Real Cajun, won a 2010 James Beard Award proves that even a blind hog finds an acorn now and then.  (The Beard Foundation, usually pretty good on restaurants, can be really fallible about cook books and food writing.  Witness the fact that Sara Roahen’s great Gumbo Tales wasn’t even a finalist — nor was Holy Smoke, the best barbecue book of all time.  But I digress.)

Gertrude Stein famously said of her native Oakland that there was “no there there.”  All she meant was that nothing she remembered from her childhood remained, but her expression was fated to acquire the meaning that has made it a cliché.  The world needed a way to say that a place has nothing to let you know where you are, nothing local, nothing for anyone with a sense of place to latch on to, and that was far too good a way to say it. For all too many cities and towns these days, — in general, and certainly when it comes to cuisine — there’s no there there,.  It’s ironic that Oakland isn’t one of them.  Neither is New Orleans.  Despite the inroads of national chains, on the one hand,  and “Global-Modern cuisine,” on the other, it never will be.  And thank God for that.

John Shelton Reed, retired from the University of North Carolina at Chapel Hill, is working on a book about the French Quarter in the 1920s.  His most recent, written with his wife, Dale Volberg Reed, is Holy Smoke: The Big Book of North Carolina Barbecue.

The Republic of a Restaurant