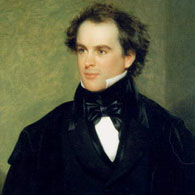 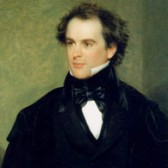 Nathaniel Hawthorne’s “The Birthmark”[i] has achieved new fame in recent years through Leon Kass employing it in the President’s Council on Bioethics.[ii] The story is gripping and obvious in its portrayal of a foolish man’s maddening attempt to scientifically control and perfect nature only to destroy the humane potential and joy of his conjugal life. There, however, also seems a deeper theme and dynamic in the narrative, for it is also an illustration of modern Gnosticism, which Eric Voegelin roughly views to be an attempt at realizing the perfection of the eschaton within the temporal realm. Moreover, as we will see, Hawthorne also reveals how the pursuit of scientific progress can often be a manifestation of humanity seeking to be gods unto themselves.

Hawthorne begins by discussing the late 18th century zeitgeist of utopian-hope in scientific progress to which the tragic Aylmer becomes a captive in an attempt to remove his lovely wife’s only physical flaw, a crimson-colored birthmark on her left cheek resembling a small hand.  Before his marriage, Aylmer had been “an eminent proficient in every branch of natural philosophy.” This was a time “when the comparatively recent discovery of electricity and other kindred mysteries of nature” had made “the love of science” an “absorbing energy.” Infact, according to Hawthorne, the “higher intellect, the imagination, the spirit, and even the heart might all find their congenial aliment in pursuits which, as some of their ardent votaries believed, would ascend from one step of powerful intelligence to another, until the philosopher should lay his hand on the secret of creative force and perhaps make new worlds for himself.” The possibilities of scientific progress prompted new hopes for finally achieving what natural humanity had long hoped for: self-deification via achieving mastery over nature and the capacity to create a world like God had done.

Convinced of his ability to “correct…what Nature left imperfect in her fairest work…,”Aylmer persuades his dear wife, Georgiana, to consent to his experimental removal of her facial birthmark.  In doing so, however, he fails to recollect his past lesson, which he learned in a futile attempt to master how “Nature…create[s] and foster[s] man”, that  “Nature” man’s  “great creative Mother, while she amuses us with with apparently working in the broadest sunshine, is yet severely careful to keep her own secrets, and, in spite of her pretended openness, shows us nothing but results.” This amnesia results in a train of abortive attempts to play the Deity. To comfort Georgiana who fears his laboratory, Aylmer creates a mock-plant, but its leaves instantly wither into “coal-black” before Georgiana can “inhale its brief perfume.” Then, Aylmer fails to photograph Georgiana’s likeness through a “scientific process of his own invention.” The photo is almost indecipherable save “the minute figure of a hand appeared where the cheek should have been.” Also, there is Georgiana’s sense, which is prompted by her husband’s “minute inquires into her sensations…”, that Aylmer has been unsuccessfully trying all along to secretly remove the birthmark through the food and fragrant air that Georgiana has been consuming while in the laboratory.

In addition to these attempts at god-likeness, Hawthorne also reveals a profoundly religious quest to overcome the limitations and finitude of man’s place in nature and so to realize perfection on earth. Georgiana’s reading of Aylmer’s diary of his past “success or failure” in conducting experiments exposes a human person handling “physical details as if there were nothing beyond them; yet spiritualized them all, and redeemed himself from materialism by his strong and eager aspiration toward the infinite.”  Here Aylmer seems to commit what Eric Voegelin in The New Science of Politics defines as “Gnosticism,” which (according to Voegelin) entails “an immanentist hypostasis of the eschaton” or seeking to realize a perfection in the immanent/temporal world that is akin to the transcendent perfection of the Christian eschaton (i.e., the end time that includes “the Last Judgment and the advent of the eternal realm in the beyond.”). [iii] Rather than continuing to engage in the relatively difficult process of finding spiritual fulfillment through the traditional Christian Church of the West that, through the influence of Augustine, understood “there would be no divinization of society beyond the pneumatic presence of Christ in his Church,” Aylmer as the representative modern western man engages in “Gnostic speculation” that prompts him toward (in Voegelin’s words) “the more appealing, more tangible, and, above all, so much easier creation of the terrestrial paradise.”[iv] Aylmer’s quest to master physical nature through science seems a religious/spiritual search for realizing the “infinite” in the immanent- i.e., attempting to immanentize a perfection that (according to Voegelin) Augustinian Christianity suggests can only be realized in the transcendent realm.

Such intellectual pathology is not just a personal tragedy for those under the spell, Voegelin shows that modern Gnosticism results in both paradoxical regression of civilization and infamous totalitarianism.  He argues that the Gnostic attempt at immanentizing the eschaton can result in a civilizational paradox. Modern civilization develops rapidly due to moderns engaging “civilizational activity” for the sake of realizing “terrestrial paradise”, and personal “death of the spirit” to the extent that moderns invest themselves “into the great enterprise of salvation through world-immanent action.”[v] According to Voegelin, the latter is a regression in civilization that results in its ultimate decline; “since the life of the spirit is the source of order in man and society, the very success of a Gnostic civilization [-i.e., the hyper-pursuit of civilizational activity causing death of the spirit-] is the cause of its decline.”[vi] This process of “advance and decline,” however, comes to an abrupt end “when an activist sect which represents the Gnostic truth organizes the civilization into an empire under its rule.”[vii] This is “Totalitarianism, defined as the existential rule of Gnostic activities,” and it is “the end form of progressive civilization.”[viii]

Voegelin, himself, identifies the particular manifestation of Gnosticism that Hawthorne’s character, Aylmer, seems afflicted by: “Scientism has remained to this day one of the strongest Gnostic movements in Western society; and the immanentist pride in science is so strong that even the special sciences have each left a distinguishable sediment in the variants of salvation through physics, economics, sociology, biology, and psychology.”[ix] As Hawthorne understands, the tragic consequences of “Scientism” are legion. For Aylmer and poor Georgiana it is Georgiana’s death during their final reckless attempt to remove her birthmark, which is intimated in the story to be intrinsic to and necessary for her human life; “[t]he fatal hand had grappled with the mystery of life, and was the bond by which an angelic spirit kept itself in union with a mortal frame.”[x] For ourselves in the 21st century who now must face (among other scientific flowers) the possibility of atomic destruction of the inhabitable parts of Earth and the mass destruction of human embryos for the sake of advancing bio-engineering technology, the progress of science has resulted in the paradox of greatly expanding civilization but with the risk of destroying a significant portion of humanity. Another question we must face in our present is whether the specter of totalitarianism, which we now know was ultimately to follow the strange 18th and 19th century Gnosticism that Hawthorne was critiquing, will dramatically erupt, again, in our world of new Gnostic “modes and orders.”[xi]

[i] Nathaniel Hawthorne, “The Birthmark, ” The Literature Network: http://www.online-literature.com/poe/125/. The impetus for this essay was my participation in a leisurely discussion of this story at a reading group in Phoenix, Arizona with Michael Fink, Jamie Hansen, Erik Twist, and Nik Nikas. I am grateful to these gentlemen for sharing their observations about and helping me better understand Hawthorne’s  “The Birthmark.” [ii] Albert Keith Whitaker, “Neoconservative Nathaniel: Bioethics and “The Birth-Mark,” Hawthorne in Salem: http://www.hawthorneinsalem.org/ScholarsForum/MMD2448.html. [iii] Eric Voegelin, The New Science of Politics: An Introduction, Chicago: The University of Chicago Press, 1987, 107-132, especially 109 and 120. [iv] Ibid., 129. [v] Ibid., 128-131. [vi] Ibid., 131. [vii] Ibid., 132. [viii] Ibid. [ix] Ibid., 127. [x] Hawthorne, “The Birthmark.” Also, see Whitaker, “Neoconservative Nathaniel.” [xi] The phrase “modes and orders” is by Machiavelli. See, for example, Niccolo Machiavelli, The Seven Books on the Art of War, by Niccolo Machiavelli, Citizen and Secretary of Florence, trans. Henry Neville (1675). Chapter: FIRST BOOK Accessed from http://oll.libertyfund.org/title/984/90382/2044778 on 2010-07-22.

‘Spiritual but not Religious’ Revisited: An Urgent Case for the...