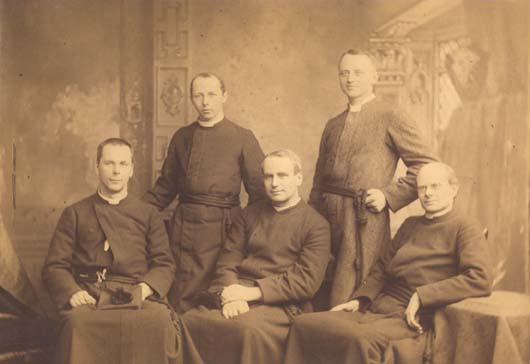 Drexel Hill PA. Most people don’t know what a cassock is anymore. There was a time when the sight of a cassock instantly brought to mind the image of priesthood. It was one of a whole host of recognizable symbols of community life—symbols like the doctor’s white coat or the sheriff’s uniform and gold star badge—that connected the local and particular with the universal. Now most of those symbols are gone, and gone with them is the sense of community cohesiveness that they used to communicate.

Earlier this week, in the midst of a heat wave, knowing that the air conditioner in my car was on the fritz, I debated whether or not I was going to wear a cassock to meet with the family of a man at whose funeral I’d be presiding, a man I’d never met while he was alive. I am a Christian priest, of the Anglican tradition. I get calls to officiate at this type of funeral at least once a month. I usually say yes, if I can. I believe that everyone deserves to be prayed for in death, and sometimes a funeral is just the right occasion for planting some seeds that might later grow into faith.

I was happy to go and officiate at this funeral, even though it was stinking hot outside. But I didn’t have to show up to meet the family beforehand in my cassock. These were not my parishioners. I could have shown up in anything that looked somewhat vaguely religious and they wouldn’t have noticed. So I reasoned with myself, why put on the cassock? Why bother?

The cassock was once the standard article of dress for Christian priests. Long after the Great Schism divided the east from the west, the cassock remained a symbol of priesthood that was acknowledged by Catholic and Orthodox alike. Cassocks have been worn by priests for so long that their origin is somewhat mysterious (despite the certainty that Wikipedia seems to have in the matter). They probably developed out of the common tunic that was worn by almost everyone in the Roman Empire. By as early as the seventh century, though, the cassock was a distinct enough garment that people identified it with clergy. The cassock was a symbol of the priesthood in the way that a white coat is a symbol of medicine or a tie is a symbol of formality and professionalism.

But all of that is over now, at least in the west. At age thirty, I’m the product of a post sixties, post sexual revolution, post Vatican II world. There’s no room for the cassock in the world in which I’ve grown up. I’ve never seen a Roman Catholic priest wear one, outside of the movies. In my own tradition, cassocks are reserved for liturgical functions, and even then they’re becoming rare, traded in for the more functional cassock-alb. To wear a cassock when not officiating at liturgy is to paint one’s self as a stuffy traditionalist who is pining after the nineteenth century, a clueless old fuddy duddy who is still trapped by the oppressive social norms of yesteryear.

Nevertheless, when I was first ordained four years ago I did try to wear my cassock more often than many of my colleagues. The results were somewhat abysmal. While a few of my oldest parishioners told me that they appreciated what I was doing, most were simply confused by it. Once while making hospital visits in my cassock, a young man asked me if I was wearing a Halloween costume. Several times I was laughed at and asked why I was wearing a dress. I soon gave up.

The cassock is an anachronism. It’s no longer a universal symbol of the priesthood. And that saddens me deeply.

Some people may think my lament over the decline of the cassock is silly. After all, the cassock is as impractical as it is unfashionable. And I must confess that the loosening of strictures around what clergy must wear is not all bad. There are times when a cassock doesn’t make sense. I’m glad, for instance, that I don’t have to show up to my kid’s soccer games dressed like I might need to say Mass at half time.

But what I lament isn’t so much the loss of the cassock itself as the loss of the whole cache of cultural symbols of which it was once a part. The cassock once communicated the universal reality of priesthood to the local communities in which priests served. Every town once had a doctor, a butcher, a sheriff, as well as a priest. The child who grew up in each town was able to see the doctor’s stethoscope and identify it with the healing arts not just in some abstract sense but in the way that good old Doctor Smith administered them. The symbols that denoted these universal practices were intimately connected with the people who practiced them. The cassock was a symbol not just of priesthood. It was a symbol of Father Jones who baptized my children and was at my father’s bedside as he lay dying. And seeing these different symbols, such as the cassock and the white coat and the sheriff’s gold star badge, gave the child a sense that he wasn’t just growing up in a cluster of random people but in a community, a living organism in which each person played an important and unique role in the lives of others.

Ironically, it’s the very quest for uniqueness, for freedom of expression and freedom from unnecessary constraint, that has lead to the tyranny of homogeneity that we experience today. I have no idea whether there’s a butcher or a doctor living in my town. Everyone wears the same thing. We all express ourselves the same way, in the same button down shirts and slacks bought off the rack at Sears. The fact that we happen to live in proximity to each other is simply coincidence. There’s no purpose to it.

The universal symbols are gone, replaced by the universality of brand names and box stores. In the process, that which is unique to each local expression of community has become obscured. I’ve lived in different parts of three different states. Every time I move to a new place, I’m asked by the locals, “How do you like living here?” I’m never quite sure how to answer that question, and for the longest time I didn’t know why. And then one day it dawned on me, I couldn’t answer the question because I couldn’t figure out what the difference was between one place and the next. I ate at the same chain restaurants and bought my clothing at the same strip malls everywhere I went. The fact that it was eight degrees colder in New Haven in the winter time than it had been in the suburbs of Baltimore was hardly enough to give me a real sense that there was something that separated the two.

We need symbols, not just brands. We need symbols that speak to our hearts and that communicate deep truths about who we are and how we live. We need to know that there are differences between us that go beyond whether or not we happen to prefer PCs over Macs or Cheerios over Corn Flakes. We need to learn again that there is such a thing as calling and vocation, that each of us can be called upon to serve our communities in a special way, not simply by consuming but by producing the goods that hold our communities together, whether or not those goods are tangible.

I didn’t have to wear my cassock to meet that family, nor even to conduct the funeral. I could have just thrown something on while I was saying the prayers and discarded it just as quickly afterwards. I’d have been more comfortable that way. But I wore my cassock, as hot and uncomfortable as it was, because it means something, and because I hope that those who see it might experience some small recognition deep in their hearts.

Perhaps it doesn’t make a bit of difference. Perhaps I am just a silly old fuddy duddy trapped in a young man’s body. But on the rare chance that the seeds of community can be planted by me occasionally making a fool of myself then I’m happy to do so, even on the hottest day in July.

Father Jonathan Mitchican is a father, a husband, and a priest. He lives in Drexel Hill, Pennsylvania and pastors the Church of the Holy Comforter.