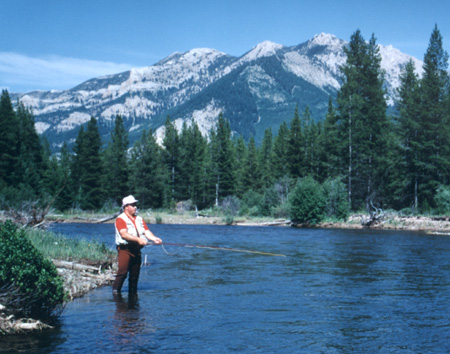 Kearneysville, WV. Sometime during the warm months of most every year, I watch the film A River Runs Through It. The mood often hits me when a cloud of melancholy descends and the business of life leaves me looking for escape to simpler times or the oppressive heat and humidity of the east leaves me longing for the hot dryness, the smell of pine, and the cool nights of Montana.

We moved from Montana when I was fourteen but only just over the border into Idaho. That move, though, took us from the south eastern part of the Big Sky State to north Idaho (the panhandle), which includes enough square miles to swallow up a good number of the diminutive north eastern states. And while some ignorant people might call all that space “fly-over country” and dismiss it as just more of the same, there were noticeable differences. I recall being shocked to learn that kids in Idaho told Montana jokes like Montanans tell jokes on the North Dakotans. As I recall, these jokes often included at least one sheep and a coyote (always pronounced “ki-ote” not ki-o-tee”).

It wasn’t just the jokes that were different. The weather in north Idaho is moist and cloudy. Fog hangs over the dark white pines until late in the mornings and the winters are often rainy and cold with the sun so shy that it sometimes doesn’t deign to make an appearance for days on end. This moistness makes the vegetation grow thick under the pines, spruce, and cedar with dripping ferns and alder hampering the progress of anyone who strays off the game trails that cover the mountains like thin gossamer threads.

Montana is different. The mountains in the west act as a barrier to the moisture coming from the coast, so the rain-filled clouds discharge their cargo upon Idaho as they struggle to muster enough altitude to rise above the mountains barring their way. As a result, Montana is drier. The sun shines in the winter revealing a cobalt sky with air so cold it hurts to breath and your nostrils freeze shut on a deep inhale only to release under the pressure of the exhale. The terrain gets drier and flatter as you head east and the mountains give way to broken hills (the flat topped ones are called “buttes”), the rivers slow and lose their sparkling clarity, and sage and prickly pear complement the juniper and knotty Ponderosa Pine. This is the country of the mule deer and prong-horned antelope, and it was here in eastern Montana that George Armstrong Custer, that brash leader of the ill-fated Seventh Cavalry, led his 278 men into a battle against several thousand well-armed and deeply offended Sioux and Northern Cheyennes. The Indians won that round but lost in the end, tragic casualties to prejudice, bad policies, deceit, and the clash of two incompatible civilizations. Today you can still find arrowheads lying on the dirt as if placed there only yesterday by the warrior who painstakingly fashioned it from the flint-like rock called “chert.”

However it is western Montana that calls me, and I suppose it is for this reason that when I’m feeling down—a feeling a lot like homesickness—I find myself watching a film set and filmed there.

Norman Maclean wrote the novella upon which the film is based after leaving Montana and making a career of teaching English at the University of Chicago. It’s a book about memories, about growing up, about the struggles to understand other people, struggles made all the more urgent and poignant because those involved are of the same family. It’s also a story about fishing, a mere activity for some, a barbarism for those who don’t know better, but a form of art for the Maclean family. Fishing is the catalyst for a story that trolls much deeper.

Unlike Norman, his younger brother Paul is committed to remaining in his place. He emphatically declares that he’ll never leave Montana. Yet, he died an early and violent death after an enigmatic life where his talents as a fisherman were only matched by his passion for whiskey and his penchant for high-stakes poker. Paul stays home and dies. Norman leaves and lives to immortalize his place in the words he writes.

Disdain for outsiders is clearly voiced in the film and this disdain still exists in Montana and other rural places that have suffered the indignities of outsiders with money buying up choice property, demanding their own way, and expecting the locals to accede to the incessant demands in accents not native to that place. “Californian” is an epitaph broad enough to include any outsider who acts like he owns the place and can’t drive on snow-covered roads. “Damn Californians” is the rough equivalent of “damn Yankee” that is still sometimes uttered (and more often thought) in the south.

Being the son of two native Montanans, that general disdain for outsiders was instilled from a young age (this, of course, co-existed with a strongly cultivated habit of hospitality). Because I grew up before the California invasion (or what one old-timer described to me as the “Californication” of Montana), the objects of disdain were “easterners.” We were convinced that anyone who grew up east of the Mississippi were all naïve city folks, physically wanting, and lacking the good sense to survive even a night, much less a week, in the wilderness. Whenever his kids complained or suggested that things were too difficult or painful, my Dad (and Mom as well) bolstered us with a bit of advice rolled into regional pride: “you’ve got to be tough to live in the west.” Without thinking I’ve said that to my own sons, but they remind me that West Virginia is not the west, and while the Mountaineer State has its charms, they are right.

I suppose that non-fishermen find the fishing scenes in the film tedious and the pages of the book dedicated to that art even less comprehensible. But anyone who has plied clear mountain streams for native trout will not have this response. Maclean is an artist with the pen as his brother was an artist with a rod and line. My father taught me to fish those waters of Western Montana, but whereas the Macleans favored the Big Blackfoot our river of choice was (and is when possible) the South Fork of the Flathead.

Maclean, as I said, taught for his entire career in Chicago, but he owned a cabin on Swan Lake north of Missoula, and he spent his summers there, renewing the bond with his place and teaching his son to catch trout. I like to imagine that he favored a Royal Coachman dry fly on a number 10 hook, for that is the first fly I reach for when we’re in the Flathead.

Maclean’s father was a Presbyterian minister, whose austere theology informed his fishing, so much so that Maclean quips that in his home, there was no clear line between religion and fishing. Furthermore he and his brother were raised to believe that all the best fishermen were fly fisherman and the best fly fisherman were dry fly fisherman. My father’s Lutheran upbringing did not seem to instill the same rigidity. In fact, when it comes to fishing, he is as pragmatic as any Baptist. Like a fly fisherman, he uses a fly, but he also employs a float (we call it a “bobber”). And in an act that would appall any fly fishing purist, he skewers a grasshopper onto the hook thereby turning the neat threads and feathers of the fly into a tangle of colors and insect parts with spindly legs clawing the air on each side but after a few casts dangling behind. Thus, each day of fishing begins in a grassy field kicking the dew covered humps of vegetation that includes the ubiquitous “bear grass” as we search for the requisite number of “hoppers.” The hoppers favor the sun, so keep out of the shade. Dad still carries an old tin band-aid can into which we push the little tobacco spewing insects until the can sounds like a bag of popcorn happily popping away. It is only then that we head to the river carrying what Norman, no doubt, would disdainfully hold as the equivalent of a red Hills Bros. coffee can full of worms.

I still like to fish with my Dad, but now it happens only every couple of years. He’ll be seventy in a few months. I need to make a plan to travel across the continent to fish. To catch hoppers with my boys. To give them memories that they can keep forever and revisit when they are grown. They’ve done these things, but the repetition is important, just as the retelling of family stories solidifies their meaning in the circle of hearers who one day become the tellers.

Strange how all of these memories and more can be summoned by a story told in film by a man I never met. But stories, the best kind of stories, can do just that. They touch something common in us all. Thomas Wolfe said you can’t go home again, but I think he might have been mistaken. For home, at least the home of one’s youth, exists in memories carefully tended, memories handled regularly, dusted, and turned over in the mind, and thereby kept alive but also refined, refreshed, and distilled. In fact, memory may be the only place where the home of one’s youth still exists.

Haunted by Grace, a little East of Eden: A Literary Apologetic